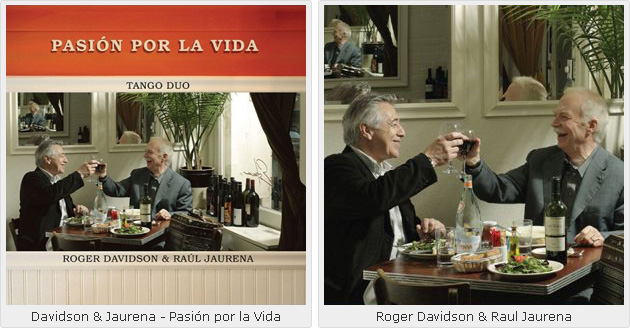 Pasion Por La Vida is an unusual and memorable record, even by Roger Davidson’s standards. It is the third “Latin” record made by Davidson, a pianist influenced by Bill Evans as much as by Chopin. But Pasion Por La Vida takes Davidson’s love for the music of South America a shade further than – Mango Tango, Amor Por El Tango and Rogers in Rio – his earlier expressions of that love. This record is a kind of maturation for Davidson has composed all the eighteen titles on it. Spectacularly, all are tangos – eleven of them have been written in the classical Argentinean form. Several others are more European and there is a Brazilian chorinho, a bolero and a rumba but these may not be played in the familiar 2/4 time signature that exemplifies “the tango”, what unites them with the other tracks on the record is that they all reflect passion.

Davidson is able, here, to switch from his customary jazz-inflected voice to the staccato and sometime legato world of the tango. The dynamic he applies to his pianistic touch is therefore quite different. It is more percussive, following the internal rhythm of Latin melodies and the harmonic changes swirling thick, are heavier and more deliberately, almost unusually accented. Then there is that aspect of the “Tango” that is visual as the music can only partially tell the story with sound; the rest is the image that accompanies the song. Traditionally it helps always that the “tango” music accompanies a couple dancing statuesquely following the rigid dancing tradition. With Pasion Por La Vida, the dimension is singularly aural. The visual component must be imagined. This precludes the music having to work all the more harder – so that that dimension may be created like a virtual dimension, like a hologram. And here lies the success of this record.

Then there is also the almost symbiotic musical relationship between Davidson and Raul Jaurena. The pianist and the bandoneonist engage in interplay that comes from an almost telepathic understanding of the central idea of each piece. This is why ideas are exchanged as if they were imagined simultaneously but expressed separately. Harmonically as well, the musicians are intertwined and so the passionate flow of musical thought is seamless and heart-warming. And this is what separates this record form Roger Davidson’s first, Mango Tango: These songs cover a range of emotions – “Su Pasion” – the passionate romance of a man and woman, “Volvere” – that longing for home – “Puente a la Esperanza,” “Tarde Soleada,” “Alma Apasionada,” “Orquesta de Pueblo”… Throughout the record is a growing and deeper symbiosis between Davidson and Jaurena and it makes the music magnificent and moving.

This is going to be a difficult record to top in terms of following through on an idea whose raison d’etre is emotional. It would be interesting to see where Roger Davidson will go from here, but then again, if he is led by his emotions there is no horizon and more passionate music can never be very far away.

Roger Davidson on the web: http://www.soundbrush.com/roger-davidson-biography/