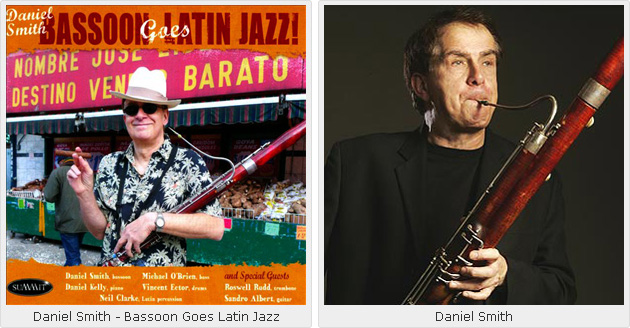 The bassoon, that ubiquitous double-reed instrument, which featured prominently in the Baroque, Romantic and Classical eras of music, has been a relatively sparingly played—especially in solo settings—in the modern era. In jazz, which is all but synonymous with experimentalism, the bassoon has been very sparingly used. There are so few exponents of this odd, but beautiful instrument that wide gaps exist between Illinois Jacquet, Yusef Lateef and Michael Rabinowitz (what an extraordinary solo in a late movement of Charles Mingus’ epic work, Epitaph) and Katherine Young, who graced the music of Anthony Braxton. But all this is likely to change with the music of Daniel Smith. The virtuoso bassoonist seemingly appears to be intent on covering a vast expanse of lost ground in jazz with a series of memorable recordings. Bassoon Goes Latin Jazz! is a magnificent recording that comes on the heels of Smith’s previous albums, Bebop Bassoon, The Swinging Bassoon and Blue Bassoon.

Smith does not so much as play the bassoon; he appears almost to make love to it. The tonality of the instrument that occupies the palette somewhere between the tenor and the tuba crosses over into the instrumental territory that is vocally a superb blend of strings and double-reeds—something that slices into the mind’s ear like a gently bowed violoncello and the double-reed that it is, with its characteristic wave-like intensity that ebbs and flows between tenor and baritone. Such is Smith’s mastery of his instrument that he plays it with a voice that sings like a soaring aria. He can make it sound mournful as he does in Horace Silver’s “Peace” with its aching melody. Here Smith also follows the mood of the piece that emerges with immense sadness from the depths of the soul, to fly out with enormous elation as the song winds to its inevitable close. In doing so, Smith reveals the extent of his virtuosity; one which allows him not only to depict emotion with extraordinary expression, but also to turn on a dime, from extreme sadness to extreme joy.

It is the latter emotion that flavours most of the music on this album. Charts like “Mr. Kenyatta,” Lee Morgan’s tribute to a legendary African leader, Herbie Hancock’s magnificently suggestive “Watermelon Man” and Charlie Parker’s ingenious “Yardbird Suite” all brim over with joie de vivre. Infusing them as he does with a Latin tinge, Smith rededicates their moods and emotions to the joyous elements of human endeavour. Smith has also chosen his musical company with great attention to the melding of like-minded spirits. For instance, having the great trombonist, Roswell Rudd blow his smeary solo in response to the preachy one from the bassoon is utterly inspired. His choice of Brazilian guitarist, Sandro Albert to lend his ingenuity to “Mr. Kenyatta,” “Black Orpheus” and the proverbial “Peace” is just as inspired. Moreover, Smith’s choice of bassist, pianist and especially his percussionists displays his extraordinary sense of perfection. The choice of drummer Vincent Ector and percussionist Neil Clarke is faultless. The manner in which these two instrumentalists create the astounding rhythmic bridge, which features an absolutely brilliant con arco passage by bassist, Michael O’Brien followed by the shimmering percussion passage is one of the more memorable aspects of the album.

Of course, it is Daniel Smith who is the unforgettable star of this journey that is full of the drama of romance in a truly musical sort of way. This is an artist whose future work will be awaited with bated breath.

Daniel Smith on the web: www.danielsmithbassoon.com/