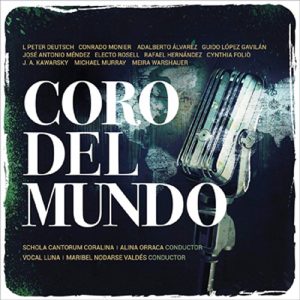 This is a glorious recording. The polyphony of these thirteen sacred and secular works on Canto Del Mundo is simply magisterial, performed memorably and with clarity of meaning and impeccable devotional spirit by two of the finest choirs in Havana Cuba who specialises in classical polyphony: Schola Cantorum Coralina, conducted by Alina Orraca and Vocal Luna, conducted by Nodarse Valdés. Both choirs are every bit as iconic as the legendary Cuban Creole Choir of Cuba formerly known as Grupo Vocal Desandann, whose pioneering members are all of Haitian-Cuban heritage and sing in a mixture of Spanish, English and Creole. Some of the repertoire on this disc is also written in English and it is handled with remarkable precision and élan by the members of both choirs.

The music is subtly varied, crafted for different groupings of voices and by mixing contrapuntal and polyphonic writing – that is music made up of independent overlapping voices (as on Michael Murray’s “Caminando”) contrasted with music where the voices of the choirs sing the words together in the same rhythm (as on L. Peter Deutsch’s “Dance to the Revolution”). In both these – and other – repertoire here the voices in both choirs are lucid and direct, and at times, also lively and rarefied.

As in the sacred piece, the secular ones also written in a style that is characterised by clarity, sweetness of sound and dwell in serenely optimistic moods. Producer Bob Lord has done yeoman work here in bringing together music that is uniquely different and carries the singular stamp of individual composers and yet seems to be written as one. Each of the works is bathed in the essential tranquility of the choral voices and this poetry of feeling in the music is helped by the poignancy of the words, as it also soars in the unruffled interchange of the voices in each of the choirs, expertly shepherded by the batons of Miss Orraca and Miss Valdés.