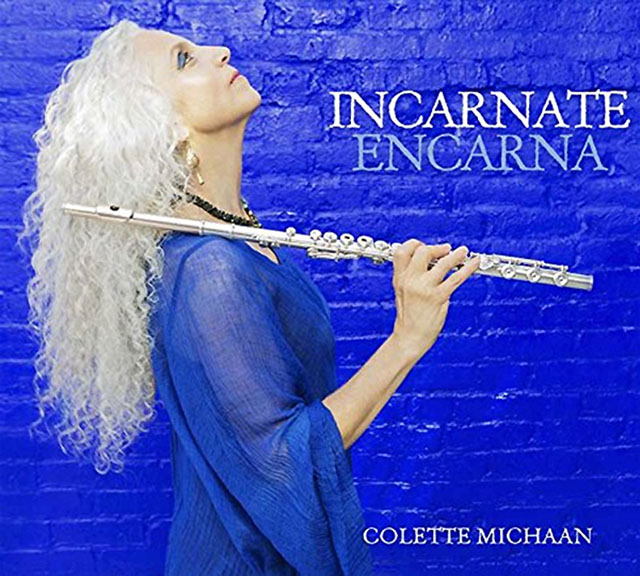 The third solo album of Colette Michaan, Incarnate/Encarna—the second, since her amazing album Querencia—is a notable achievement on various levels. The team of pianist and arranger Pablo Vergara, the quintessential trombonist Ruet Regev, violinist Mireya Ramos, sensational harmonica player Grégoire Maret, bassist Jorge Bringas, percussionists Román Díaz, Luisito Quintero, Yusnier Sánchez Bustamante and drummer Harvey Wirht as well as Fernando Aponte, Akihiro Nishimura and Tim Marchiafava (engineers), photographer Erin O’Brien and graphic designer Andrea von Bujdoss have combined to produce an album of lasting beauty. The nine tracks are quite fascinating, the title track and “Wisdom” are two of the most brilliant leaving you with the distinct impression of impassioned, whimsical improvisations, while “Identidad,” featuring extraordinary work by Ms. Regev, is another one of those joyous songs that stick in the mind like a proverbial and welcome burr. The latter is boldly experimental with passages of prescient Colette Michaan.

It is true that not all of the music is as intriguing as “Intention” and “Obatalá,” but it is all, nevertheless one more beautiful than the other. Ms. Michaan’s flute playing is at times profound and haunting (as on “Wisdom”) and lively (as on “Obatalá” and “Rico Melao”). At times her mighty flights of fancy are lithe and quite extraordinary and she is full of surprises throughout the album. Her way with the music shows an overall sense of gentleness and soft-grained beauty. Everywhere her finger-work makes for gracious and rounded accounts of the music, especially on the slower, more contemplative music. On this music, especially in exchanges with Ms. Regev, there is a rhapsodic narrative at play. The skills of both players show more pronounced rhythmic verve, textural variety and dynamism. In other words the two women paint in bold, primary colours, whereas the pianist, Mr. Vergara favours pastels. Between the three of them, the tapered phrases of “Wisdom” appear beautifully amorphous and the pulse of the rhythm renders the piece’s dreamy subtext with utter beauty.

A strong case can be made for this being the finest album of Colette Michaan’s young career. Clearly the music and its exquisite arrangements are in very good hands here. The musicians assert their own ingenuity with great impact. This is especially true of Abbey Lincoln’s marvelous piece “Throw It Away”. Ms. Michaan in particular plays the melody with terrific panache and captures the music’s texturally intricate writing, (shared with considerable genius by the percussionists) allied to a sensitive awareness of the varied palette of the keyboard colour. She also conveys the music’s eloquent energy, which carries the ear convincingly through those passages that the composer felt could not be dispensed with. The last few tracks—not unlike the others, of course, but perhaps more emphatically so—are given a firm dramatic thrust and character by Ms. Michaan and Ms. Regev. Of these “Innocence” is spritely and played with heartfelt introspection. Throughout the album Colette Michaan’s sound is bold and exemplary and I can hardly wait to hear what she will do next with her ardent and dazzling virtuosity and heartfelt emotion.