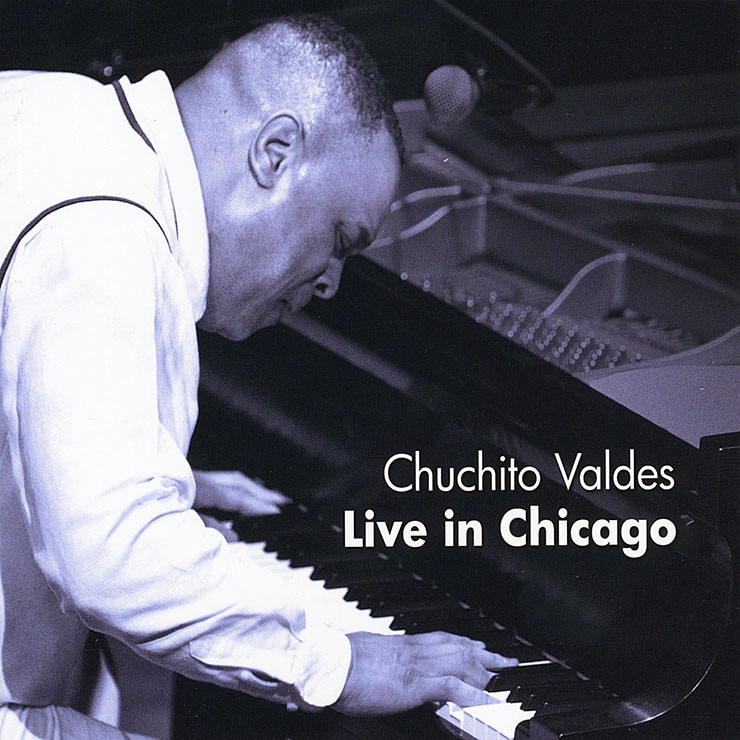 In a dynasty there is sure to be some characteristics that link one generation to another—facial characteristics, for instance, but in certain dynasties things become a little more pronounced albeit somewhat esoteric. This is certainly true for Cuba’s Valdés dynasty, a musical phenomenon that was born during the roaring 40s in Havana, Cuba, with the still magnificently active patriarch: Bebo Valdés, carried on through the decades by Bebo Valdés, then by his son Chucho Valdés with several ensembles including the legendary 70s band Irakere and now, it seems the journey continues with Chucho Valdés’ son, Chuchito Valdés. On evidence from this exquisite double album, Chuchito Valdés – Live in Chicago it feels more than a mere journey; indeed a legendary musical odyssey with one Valdés after the other playing the part of Odysseus at one time or the other and now it appears that the two elder Valdés’ are now continuing to write the Homeric script, while the young Chuchito Valdés assumes the role of Odysseus.

What to expect from this young genius and showman of a musician and pianist? First, he is chip of the old block: a virtuoso with a grand design featuring the mighty keyboard of a Steinway or a Yamaha or Bösendorfer or whatever may come his way on the world’s stage. With Bebo Valdés it was a different world and a different life in it; with his father Chucho Valdés modernity changed many things and the repertoire of Irakere was a brilliant example of what life under the rule of Chucho Valdés was going to be. Now, with the son also rising, the music of Chuchito Valdés is beginning to assert itself—certainly with two albums; Live in New York and now the epic, Live in Chicago a journey that the pianist shares with bassist Bryan Doherty, drummer Rubén Alvarez and conga player, Frankie Ocasio. And from all accounts Mr. Valdés is a generous and indulgent leader allowing his cohort to express themselves and stretch and improvise, even egging them on like some mythical sorcerer. Mr. Ocasio flies free and melodically in a long conversation with the ancestors on “Capullito” with an ingenious solo followed by a percussion dialogue by Rubén Alvarez using every bit of his armoury including timbales and conventional drums. Of course Bryan Doherty is superb throughout making darting forays into the piano territory snatching away the music from the master and enhancing the harmonics as well as the rhythmic content. Mr. Doherty is exquisite particularly on “ Bossa Para Tí” and on “Take the A Train,” which is more than a version of the signature tune of the great bands of Duke Ellington, but a mighty tribute to Mr. Ellington and Billy Strayhorn themselves.

There is a lot more to be said about Chuchito Valdés. About how organically he binds his phrases into long and serpentine lines broken only by the rhythm of the kinetic energy of son and the danzón of the great music halls of Havana and beyond… Here Mr. Valdés’ lines twist and bend with the same whiplashing rhythm of the bodies that dance and, coming forward, entwine and then break loose to the rhythm of son and danzón. Unlike his father, who lets his fingers do the singing, the young Mr. Valdés is constantly singing to his hands and fingers, goading and cajoling them ever onward as they dart or glide across the keyboard this way and that making the music whip and gush and bobble depending on how he wants the ocean of sound to feel and echo. Mr. Valdés sometimes plays soft and is sometimes raucous and flamboyant but he is always true to himself playing in that expansive Valdés mode that called out his father and now himself. Still the young Mr. Valdés is a singular voice pursuing his own grand design, which is emergent in his bold and brash and endlessly beautiful music on an endlessly beautiful album simply entitled and exquisitely crafted: an album called Chuchito Valdés – Live in Chicago