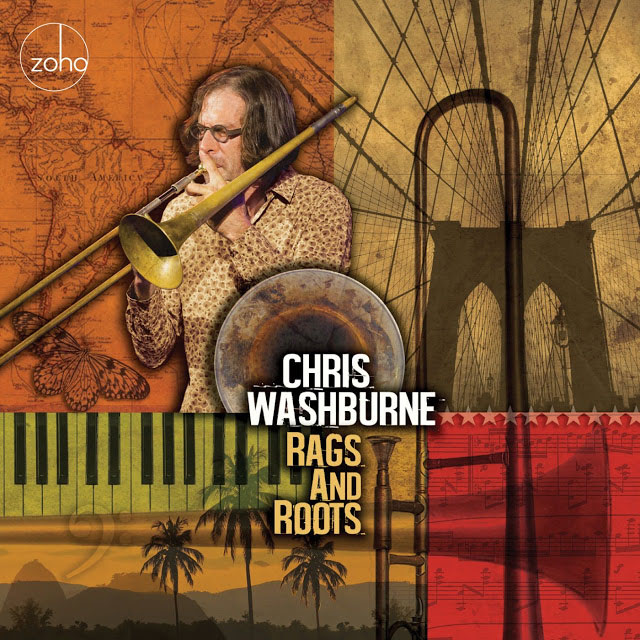 The Columbia University Professor, author and musician, trombonist Chris Washburne enjoys the company of some of the finest young musicians in the world on Rags and Roots, a wonderful album – probably the trombonist’s finest so far. It might sound like a tall claim, and not an easy one, to make. Chris Washburne is a brilliant trombonist and a music activist who has a long and varied résumé of performances under his belt. This one is his twelfth and every one of them has been stellar. However the trombonist appears to be getting better the older he gets.

For one thing it feels as if Chris Washburne is playing less on Rags and Roots, focussing more on honing his musicianship by carefully choosing the repertoire on his records and then bringing his dynamic contrasts and varied articulation to each of the songs. That may not be anything new for the trombonist – playing his heart out, I mean – but the manner of his craftsmanship on Scott Joplin’s “Maple Leaf Rag” and more so on the WC Handy/Moisés Simons medley “St. Louis Blues/The Peanut Vendor”. His employment of countermelodies on the latter is reminiscent of Charles Mingus’ classic “Do Nothin’ Till You Hear From Me” from Mingus Revisited (Mercury, 1960), in which The Great One used another Ellington melody “I Let A Song Go Out Of My Heart” running counter to “Do Nothin’…”

It might not seem to be a big deal, but it was one for Mingus and a bold one for Washburne as well. Melding Handy’s and Simons’ tunes in one seamless melody and rhythm. Call it “clever” or even “too intellectual” and you would be missing the whole point of Washburne’s unique “echo-location” – in which he “finds” the African root of both in each other’s songs, making Jazz and Caribbean branches of that same root. More than anything else it is Washburne’s digging this out that makes his “cleverness” real. The smarts are applied across the board on Rags and Roots – in Louis Moreau Gottschalk’s “Bamboula”, Ernesto Nazareth’s “Odeon”, in “Jens Bodewalt Lampe’s “Creole Belles” and in Abel Meeropol’s darkly beautiful “Strange Fruit” of course.

None of this would have been the same had Chris Washburne played this music without this group of musicians. Each member of the group is an inspired choice – from Alphonso Horne on trumpet and Evan Christopher on clarinet to André Mehmari on piano, Hans Glawischnig on bass and Vince Cherico on drums. The list of guests may not be as long, but it certainly is illustrious. Gabriella Anders and Vuyo Sotashe are superb. But if the list had stopped at Sarah Elizabeth Charles that surely would have been enough for you only have to listen to “Strange Fruit” to find that there is power in her wraith-like expressing of the deeply melancholic lyrics that emerge like ethereal gossamer lines on the poplars. And Charles sings on four other songs as well. It really doesn’t get any better than that.