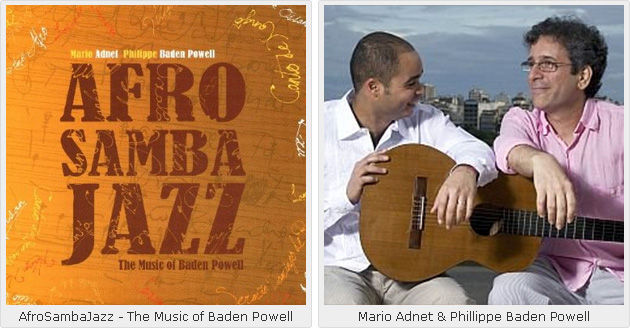 Truth is told: Had the great Billy Strayhorn been even mildly interested in courting recognition for his contribution to Duke Ellington’s music, he would have occupied a much more rarified place in the pantheon of composers and arrangers – and even pianists – in the modern history of music. His reticence, even diffidence, was all encompasing. Mario Adnet could very possibly be the same kind of personality. AfroSambaJazz (Adventure Music 2009) is just another example of this. Adnet has made a magnificent record musically honoring Tom Jobim, shepherded three spectacular projects in homage of the great Moacir Santos – not to mention a superb period piece, Samba Meets Boogie Woogie… Now he’s at the center of this highly polished revue of the music of legendary guitarist, Baden Powell. The fact that he is joined by Phillippe Baden Powell, son of the late master, who provides great insights into his father’s music and sensative arrangements on many tracks and spectacular piano, when called for, puts the proverbial cherry on the cake.

Baden Powell was a sublime artist, who took his instrument well beyond the possibilities of the guitar. He played with complete command of every idiom in classical music and Afro-Brasilian music – whether it was folk or popular music. He was associated with the legendary Moacir Santos as a student of advanced harmony. Santos also taught him Greek modes, but must surely above all else, opened his mind to further loving the music and poetry of the earth, and expressing himself without restraint, even if it meant colliding with multiple sources of cultural stimulii. There is a track on this record – “Domingo de Ramos (Palm Sunday)” that speaks to this aspect of Baden Powell’s music. It is a piece through which the soul of God flows, bringing with it the music of Heitor Villa Lobos, Redam&#233s Gnattali, not to mention primal fervor and transcendent spirituality in the warmth and reverence of the song. Moreover, in less than 4 minutes of music Baden Powell is elevated to beatification as he praises the scantity of Palm Sunday.

Mario Adnet may now have much to do with this elevation to beatification. Nothing must be, nor is anything being taken away from the sublime nature of the original music composed by Baden Powell. However, Adnet has recreated the soundscape with memorable shape shifting. To begin at the beginning, Adnet is a musician of unbridled genius. As he composed and arranged for larger groups his palette came to be one from which he was able to extract a myriad shades of tonal color and timbral textures. His use of reeds and woodwinds and brass has the hallmark of a master–one with an ear so astute that he can – with but the insertion of a note on alto flute – alter the mood of a piece from bright to sombre. He arranges great leaps of a whole orchestra from a minor mode of a chord sequence to a major mode in another chord sequence and brings celebratory resolution to a lament. His work on Baden Powell’s “Lamento de Ex&#250” bears this testimony out.

Adnet writes, arranges and conducts from a proverbial majesterium. He knows when to employ Teco Cardoso’s baritone saxophone and how forcefully it should be played just for “Canto de Ossanha,” but then how softly and sad it should sound on “Lamento de Preto Velho.” His clarinets and bass clarinets; his saxophones and flutes and trumpets and flugelhorns are so perfectly scored that it appears he knows just the right amount of breath that Eduardo Neves may require to use for a particular phrase, or how Jesse Sadoc manipulates his embouchure, or when Cristiano Alves will employ a breaking glissando. He writes a cello part to be mournful on “Nhem Nhem Nhem,” authoritative on “Serm&#227o” and jubiliant on “Domingo de Ramos.”

That is how Mario Adnet has transformed the music of Baden Powell. Now with the assistance of the maestro’s son, Phillippe Baden Powell as well. The younger Baden Powell embodies the spirit of his father and has that same dynamic touch for interpreting the tonal values of all sound when he sits down to play the piano. He has also learned well how to score for larger ensembles and his apprenticeship on this unforgettable record would no doubt complete his tutelage under the majesterial Adnet, who, it seems, was chosen as teacher to the young boy in much the same way that the elder Baden Powell was akin to Moacir Santos.

Santos’ ghost is all over this music here. Because not only Baden Powell and Santos were kindred spirits after all, but because Mario Adnet knew that, the umbilical connection had to be kept sacred. Employing the full riches of his ensemble – especially drummer Jurim Moreira, percussion colorist, Armando Mar&#231al and bassist, Jorge Helder – Adnet has also revitalized Baden Powell’s penchant for synthesizing Afro-Brasilian forms such as candomble, umbanda and capoeira with the urban samba of Rio de Janeiro. “Canto de Yemanj&#225” and “Yansan Suite” are sublime examples of this synthesis.

There may be many more tributes to the Brasilian icon, Baden Powell and some may already be in the can, so to speak. It will be a tall order for anyone following in the wake of this one by Mario Adnet and Phillippe Baden Powell to make one with as much reverence and love and affinity for the maestro who passed away almost nine years ago.

Mario Adnet on the web: www.myspace.com/marioadnet