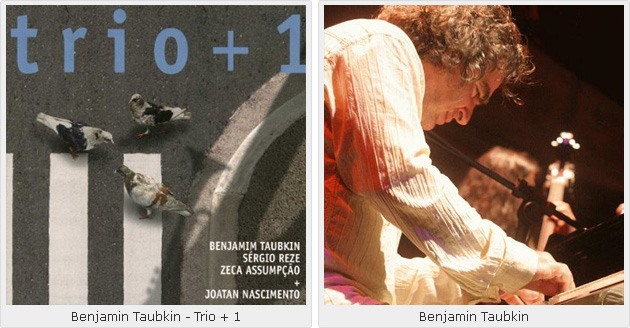 In music – even in a zone of sublime comfort – a small, unexpected ripple can disturb the ebb and flow of the wave, or groove thereby upsetting the complete sense and flow of the ocean of sound. This happens all the time, and can even stop and start a song in the middle of the first bar. That magical pulse must be felt even before the song begins. If it does not snap in the air around the musicians when it is due then it is stop and start again when the pulse is felt. Then there is the continuing interplay of bodies and souls, ideas that flow as a result from one musician to the other spurring each to build on the musical creation.

This is the dialogue hidden between the silences of the notes. This is what sets the music of pianist, Benjamim Taubkin, percussionist, Sérgio Reze, bassist Zeco Assumpção, Trumpet and flugelhorn player, Joatan Nascimento and (on just one song) the unique rhythm colorist, Fernando Sardo as well. This is what makes Trio + 1 such an utterly memorable record. Small group settings are difficult. Still there have been several very successful ones – especially trios fronted by pianists. Paul Bley’s Trios, Keith Jarrett’s Trio, Bill Evans’ Trios (especialy the unforgettable one with Scott La Faro), Denny Zeitlin’s Trios… and perhaps somewhat more famously, the small groups of Egberto Gismonti and now Heloísa Fernandes. They have all made an indellible mark in the music of the 20th and 21st centuries. Now comes this superlative group with Taubkin, Reze, Assumpção and Nascimento knocking it around.

The group sets an ethereal, almost dreamlike pace in “The Desert is Here.” Assumpção’s somewhat sinister arco opening unlocks the song. Fine melodies spout forth dry, resonant notes that rub each against other. Ideas ebb and flow in the dust, never falling as low as to die. Taubkin and Nascimento – especially the latter on flugelhorn toss music at each other like tumbleweed as Reze and Assumpção wind up the song like a spiral. The gleaming harmonics of “Pearls” breathes new life in to Jacob do Bandolim’s choro. The melody twists and turns caressing the natural flaws of the precious jewel, almost as if the musicians are handling the real thing.

Nascimento’s “Baianinho” is a tour de force. It bubbles and boils over with the elemental joy and sorrow of a classic choro and fibrilates with forró rhythms when called for. Nascimento’s horn sounds beautiful laments here and the music reaches sublime levels – as all fine art does. “The Sabiá Flew” is a special piece that reverberates with the primal rhythms of Amazonia. The flutter of the rare bird almost as if it picks up the musical notes in its wings, carrying it up to the very crown of its creation. Fernando Sardo’s specially built instruments are spectacular as they provide the canvas for the beautiful harmonic echo of nature that always follows this song.

Both “The Circus Arrived…” and “Solace” are visceral. They employ choro as the basic form but then extrapolate and fly out of the confines of the traditional. In the former, Taubkin has created something of a film soundtrack. It is impossible not to recall poetry from CP Cavafy to Manoel de Barros – yes, the Alexandrine to the earthy rhythms of the great Brasilian. The song captures the rhythms and pathos of a circus, with all its attendent quirks, colors and freaks. Suddenly the Federico Fellini film, La Strada also comes to mind as the song meanders and almost brings tears to the eyes as the world’s less appreciated – the circus players – set up shop. In addition, “Solace” is epic. It creates the space for the audience to unwind after this heart-stopping journey with the Trio + 1. Still the feeling of not wanting to leave the music behind rises up in the throat like a plea that is never really uttered. The hope, however, is that Taubkin, the sensitive Reze, the always-brilliant Assumpção, and the utterly creative Nascimento and Sardo will return, to thrill and move another audience on another day soon.