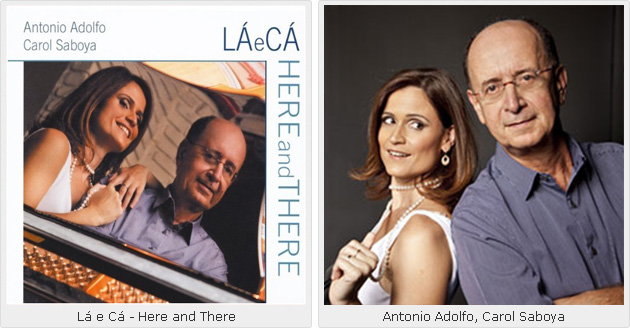 Although Antonio Adolfo makes a point to explain his singular style as an amalgam of a very personal style with a distinct infusion of Brazilian phrasing, this may not be necessary at all. Adolfo’s sweeping, symphonic pianistic style and the immaculate sense of swagger is highly recognizable. His virtuoso piano playing echoes with the offbeat of the samba, the irreverent rattle of maracatu and flights of fanciful capoeira. These he incorporates into his often delayed notes and shuffling rhythm and every time he plays there is more than enough to characterize his wonderful music. This album, L&#225 e C&#225/Here and There that he shares with his daughter Carol Saboya is stylish, heart-warming and memorable.

The elements of style come from Adolfo’s immaculate sense of melody in his writing itself. Then comes his uniquely inflected harmony, appointed, no doubt by his deep sense of “Brazilian-ness.” Then there is his pianism itself. Adolfo can summon legions of harmonic overtones as he annunciates his phrases that are rich in covert voicing. His solos are infrequent and short, when he does solo. But with classic understatement he brings visions of Brazilian renaissance to the inner ear with his rhythmic manner of repeating notes with subtle differences in strength and time. He varies the volume of his notes using exquisite dynamics and often shadows another instrument—the guitar in “Cascavel,” a roguish melody characterized by triads and the hissing of Rafael Barata’s cymbals and the trombone of Sergio Trombone in “A Night in Tunisia.”

The other reason this album is so stylish is Carol Saboya. The vocalist, not as well known as she should be—both from the Brazilian musical standpoint as well as purely on the strength of her own repertoire—is quite extraordinary. As she sings she opens her lines with a slight tremolo in the first few words, and then settles into a husky contralto, sounds like the line she sings in “All the Things You Are,” a breathless rush of emotion. Saboya has perfect pitch and can land exactly on the centre of the note she is called upon to sing, or chooses to sing. Then she bends and twists the sound of the note at will, creating spectacular changes in emotion. Her style is not so much narrative as it is emotional, of course, being Brazilian. But in this regard she affects the imagery of a chorinho as she almost cries the lyrics of “Sabi&#225” for instance.

The other vocal repertoire is varied and showcases Saboya’s sensitivity as a vocalist. She bares raw emotion when she vocalizes. She woos the lunar sky in “A Night in Tunisia” as she scats and sings along with Trombone using vivid crepuscular tones. On “Time After Time” Saboya is almost elementally sad, as she is on “All the Things You Are” and “Sabi&#225.” Much of the rest of the repertoire on the album is a lesson in piano playing as well as a lesson in melding two cultures together to create a third. In this regard, few pianists can match the skill of Adolfo, who melts the swing of the jazz idiom into the dusty swagger of Brazilian rhythms.

The ensemble of Leo Amuedo on guitar, Jorge Helder on bass and Rafael Barata on drums is a perfect setting for Antonio Adolfo, who appears to find a perfect foil in his musicians. But it is Sergio Trombone that provides the most unique and memorable moments on the album. With his vivid, talking style, Trombone creates some unforgettable harmonics on songs that will stick in the mind as unique renderings of familiar tunes—such as Cole Porter’s “So in Love” and “A Night in Tunisia,” from the pen of Dizzy Gillespie, Frank Paparelli and Jon Hendricks. Once again, the excitement of Adolfo’s music lingers on long after the music stops.

Tracks: Cascavel; All The Things You Are; Minor Chord; A Night in Tunisia; Time After Time; Easy To Love; Sabiá Lullaby of Birdland/Garoto; So In Love; ‘Round Midnight; Every time We Say Goodbye/Nuvens Douradas; Toada Jazz (O Retirante)/Night And Day.