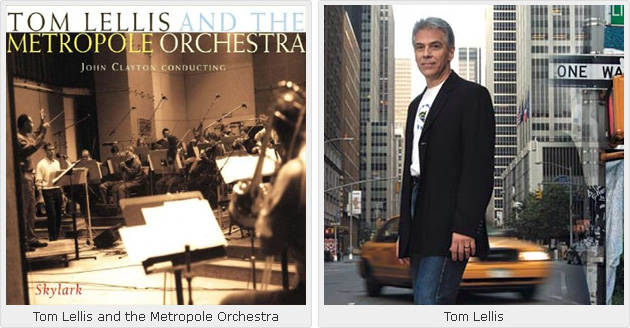 On Skylark, Tom Lellis celebrates the grand age of singers and song. This was probably not his intention at all, but fortunately, it also turned out that way. Lellis is a fine singer, fashioned from quite the classic mould of singers – like Frank Sinatra, Dean Martin and Barry Manilow. He is a narrative singer and as some of the best storytellers go, he has a wonderful intonation. In fact, he is flawless in this department and never misses a beat. That is, of course, because he has a perfect sense of timing as well – in the same rhythmic sense like that of Miles Davis… “In” at just that right moment to make the perfect sound with “just” that right word, intoned with perfection.

Then there is also the other small matter of having one of the finest orchestras providing the musical backdrop for this record. The Metropole Orchestra of the Netherlands is large and peopled with some of the most sensitive musicians around. Under the guidance of Vince Mendoza it is rightly a first call large ensemble for musicians seeking to make records– whether vocal or instrumental ones – with, well large ensembles. The pianist, Jim Beard recently made the excellent Revolutions (Sunnyside Records, 2009) with TMO. However, for this project, the wonderful John Clayton has taken over the baton from Mendoza and he does a fine job here.

Skylark must have been a challenge, even for a singer of the stature of Tom Lellis. Nevertheless, he pulls it off with such surefootedness that it appears he was born for this musical adventure. Much thought has also gone into the selection of the repertoire. There are just eight songs here, but the mix of standards – Hoagy Carmichael’s “Skylark” and Antonio Carlos Jobim’s Portuguese “Falando de Amor/Tema de Amor” with a Chick Corea chart, “Straight up and Down” and Herbie Hancock’s “Tell Me a Bedtime Story,” a song by Toninho Horta and three exquisite charts by Lellis himself – is truly inspired. For good measure, Lellis has also written lyrics for all the other songs – except the Jobim chart and “Milton’s Moment” which is vocalized wordlessly.

This too is quite an achievement for Lellis. He is no small talent when it comes to his capacity to write either. This is because he is a gifted narrator and gets into character like all fine lyricists do. The extra challenge here is to create lyrics after the fact. The Metrople Orchestra also gets sizeable credit all through the performance of these difficult songs. There is an elastic sense of give and take between the orchestra musicians and Lellis in the passages where they play behind the singer. When it comes time for a solo, the gliding fluidity between characters – Lellis and the soloist is perfect. In “Mountain Flight,” for instance, the exchanges between the vocalist and trombonist Bart van Lier are breathtaking. So are the ones between flugelhorn player, Ruud Breuls and Lellis on “Straight up and Down” and pianist, Hans Vroomans and the singer on “Tell me a Bedtime Story.”

“Milton’s Moment” is probably one of finest elegiac moments on this record. Lellis vocalizes – in perfect Nascimento style, almost exactly mimicing that unmistakable falsetto – the voice of Milton Nascimento. Such a device is hard to pull off. Milton Nascimento is one of a kind and now, it appears, so is Tom Lellis as he celebrates the seemingly limitless possibility of the human voice to glow from bronze to gold.

Tracks: Then to Heart; Skylark; Straight Up and Down; Mountain Flight; Milton’s Moment; Tell Me A Bedtime Story; Falando de Amor/Tema de Amor; Love Is.

Tom Lellis on the web: www.tomlellis.com