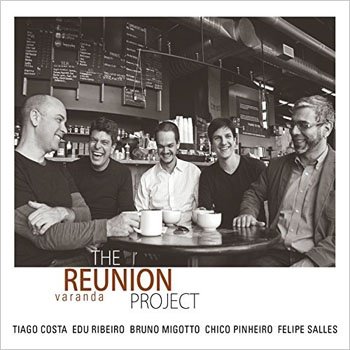 Listening to Varanda by The Reunion Project, I am struck by how they make of music a living, breathing being, drinking in its heady notes as if savouring some creamy nectar, pulsating rudiments of some refined anthropophagic repast. Such is the aroma of this feast that I am drunk just from being near it; long before sitting down to enjoy what I am beckoned to feast upon. I regard these musician anthropophagi, smiling at me from the photograph on the CD cover. Certainly they are not the same anthropophagi, whom we encounter in Pliny’s account of them, “dwelling ten days’ journey beyond the Borysthenes, according to the account of Isigonus of Nicæa, (who) were in the habit of drinking out of human skulls, and placing the scalps, with the hair attached, upon their breasts, like so many napkins…?”

For these are five Brasilian musicians, benign anthropophagi that form The Reunion Project that hardly seems something they will do. It is true, though, I am more inclined to follow Cyro Baptista’s vision of anthropophagi – musicians who have consumed notes that form melodies and harmonies, and polyrhythmic pulsations in every musical language on earth, digesting each sinew and extracting from that every drop that might bring flavour to what these musicians might create from it. This is what the music of Varanda comes into being; not some conscious beating of a drum or manipulation of keys on a piano, guitar or double bass but, as Felipe Salles puts it: a “natural chemistry”, a depth in the way they know each other “that’s unexplainable but that translates into the music”.

To this Salles might have also pointed to “Maracatim”, a piece of such spellbinding rhythm that a sudden drunkenness comes over me, which transports me through a musical portal into the long room where the table has been set for the musical feast. I am constrained; bound hand and foot, and with mouth gagged and eyes blindfolded only allowed to experience what I can through its aroma and its sound. The musicians count off one tune after the other quietly as if they are introducing me to the banquet set upon the table; the turntable of my CD player. “Sinuosa”, “Cobalt Blue”, “Sunset”, “Jack and the Goblin Brother”, “Varanda”, “Reunion”, “Mathias” and “Yesterdays”…names of fine creations to set upon with sensual, ravenous delight.

This is a musical experience that is at once something both dream-like and real, and something so utterly unforgettable not the least because of Felipe Salles and his radiant woodwinds and reeds, whose rhapsodic contributions are intertwined and juxtaposed with those of Chico Pinheiro, legendary for his maddening virtuosity on guitar, the dazzling pianism of Tiago Costa, the elegant rumbling of Bruno Migotto’s bass and the velveteen rumble of Edu Ribeiro’s drums, all redolent in a gleaming tonal quality. Together the tone of the music on Varanda is often lingeringly elegiac, and may well surprise those who associate Brasilian music primarily with the raucous samba than with such music as played by The Reunion Project, which lives and breathes in all its anthropophagic glory.