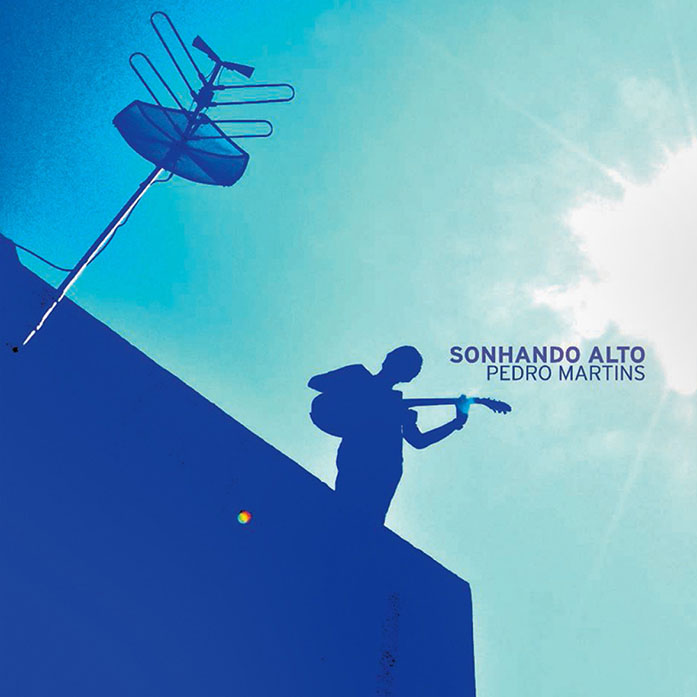 Pedro Martins has arrived. Just like that the young guitarist has simply exploded on the musical stage, continuing the line of Brasilian guitarists who have taken a leap of faith from the tradition they serve so brilliantly; adhering to it and creating within its rich environs when necessary, and making a run for it as they push out of its boundaries when the need arises. On Sonhando Alto (Dreaming High), Mr. Martins displays remarkable musical intellect and displays unbridled creativity as he appears to expand both the language and the literature of his instrument. He plays a guitar in voluptuous and radiant notes, which sound as if they were hammered as by the soft felts of a piano and sometimes as if they were a mix of piano and a glittering roll-out from a horn. His lines are wonderfully elastic and feature single notes and gorgeous sixteenth note triplets, picked by seemingly elongating the fingers of both hands almost magically. These weave in and out of Brasilian rhythms reminiscent of the lines of a choro that wail and leap like excited impalas. His colours are verdant and azure as if he might be reflecting earth and sky as he reaches impossible heights in complex melodies and harmonies that feature an embarrassment of riches.

Mr. Martins appears to be made entirely of music. This he is first and foremost. Then he is also wholly Brasilian and his sensibilities are slender and sinewy, beautifully angular and full of both rustic charm and the remarkable shades of a Carioca. This is eminently reflected in his compositions that are full of wonderful twists and turns in their inspired and vivid melodies. Each tells an exciting short story. Should their music be compared to print narratives, they would be more beautiful albeit judged unfairly because they feature such lyricism so as to be animated like film. Emotional edginess floods the imagery of the music. Broad hints of choro often slide in and out of songs—“Ciclo da Vida” and the fabulous “Viva o Hermeto” are two such charts; Brasilian clave underlines every song that stretches, bobbles and weaves as they sashay and swing with almost impossible abandon. Here Mr. Martins is aided and abetted by some of the finest young Brasilian musicians. His compatriot on tenor saxophone, Josué Lopez plays the role of second lead voice often and his contrapuntal phrases and lines dance in and out of the guitarist’s like blazing comets, when the music calls for this—as on “Terra Prometida”—and at other times in lyrical double-helixes—on “Anos Luz” and “Caminhos”.

In all of the music Pedro Martins assumes roles that would illuminate the dramatis personae of a vivid science fiction production. The guitarist lights up the various registers of his guitar in brilliant runs and rapid arpeggios as if he were rocketing breathlessly towards a distant sun. Here the music of “Anos Luz,” “Nas Nuvens” and “Terra Prometida” become parts of that drama in three acts. He is melancholic and down to earth on “Para o Amor que Ficou,” in a reflective mood in the glacial and ruminative “Ciclo da Vida” and just plain excited as he roams the beautiful and complex city in “Viagem ao Rio”. Then Pedro Martins can be both astronaut and musician as he pays homage to “El Brujo,” Hermeto Pascoal in an exquisite choro that is announced by a celebratory introduction on drums by one of two drummers on the date—Alex Buck—who introduces various instruments until the ensemble breaks into the choro that stutters and skips moves in forward motion and features remarkable, twists and inversions of melody, just like Mr. Pascoal’s music. What a tremendous little song to end a truly memorable album with. The fact that it ends almost abruptly suggests that there is a lot more to come from this ingenious young musician, Pedro Martins.