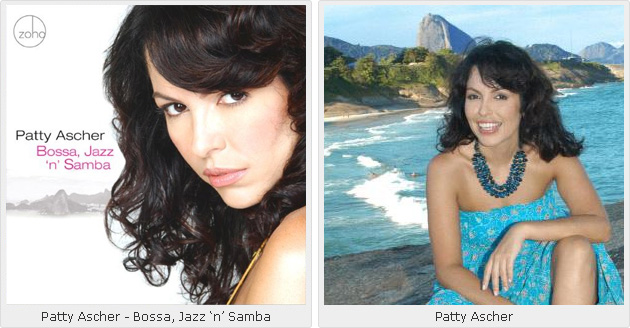 Patty Ascher’s exquisitely floating soprano literally takes flight on her ever so memorable English album, Bossa, Jazz ‘n’ Samba, a collection of mostly original songs from her pen. With a voice that sounds as if she were so beautifully vulnerable, Ascher navigates a myriad of emotions from longing and sadness to wonder and joy. Although she is exacting in her interpretation of emotions, her voice, almost devoid of any vibrato is so fey and delicate and beautiful that she sounds as if she might break down at any moment. Quite the contrary, however, she soars way above the concreteness of each song, seeming to develop angelic wings, as she flies in the face of conventional vocalastics and into the realm of fantasy; a glorious imaginarium that is almost too exquisite to behold.

Ascher is the kind of interpretive singer who can handle almost any mood and almost any kind of song—from one that is narrative to one that springs from the depths of the soul. Moreover she has such an instinct for the exact nature of the song’s emotional centre that she hits the spot almost all the time. This is something like having perfect pitch; only in this instance it does not matter whether she does have perfect pitch, because her accent is on the key moment in the emotion; on the exact twist of the moment of pain or joy or whatever it is she is expressing. A marvellous example of this extraordinary ability is in the aching ballad, “How Much I Care”. So slowly do the moments pass throughout the song that it seems Ascher is caressing every word, almost making love to each beautiful twist and turn in the lyric of the song.

Appropriately Bossa, Jazz ‘n’ Samba boasts a stellar cast of musicians from Brasil, who have come together to arrange Ascher’s songs from this beloved adventure. Dori Caymmi turns Michel Legrand/Alan Bergman’s classic “The Summer Knows” into a slow-burner with a proverbial blue flame. The magnificent Gilson Peranzetta is responsible for the tortured sighs of “How Much I Care”. Cristóvão Bastos conjures up a bleak desolation in “The Winter”. And there is much more breathtaking work in the arrangements throughout the album. Of course, the majesty of the arrangements comes to life with largely due to Patty Ascher’s brilliance in interpreting the songs themselves. Guitarist, Roberto Menescal is also there to make sure that it all comes to pass—every bit of music as unforgettable as the next.

It is never easy for a vocalist to translate emotions that are so deeply felt in the vernacular. An appropriate example would be “Saudade”. This is an emotion so unique to the Portuguese sensibility that it is next to impossible to render the word in another language—much less recreate the subtle hues of the palette of its emotions. While Ascher does make a brave attempt to do so, it might not have worked at all were it not for the extraordinary delicacy with which she renders the emotion. She appears to be on much firmer ground on the Portuguese of “Talvez”. “Pela Manhã” is another example. Although some of the subtlety of “Saudade” might be somewhat hidden in English, Ascher does make almost all of it work, thanks to a voice that soars with mysterious and magical beauty throughout.

Patty Ascher on the web: www.pattyascher.com