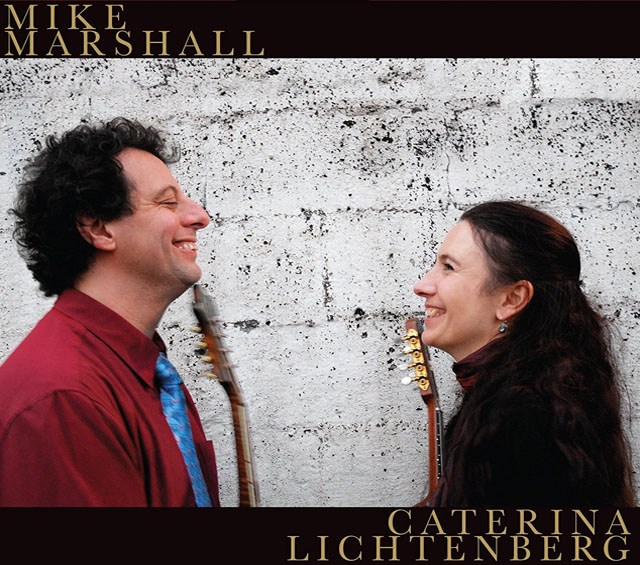 It is no longer the necessity to use the term Third Stream that Gunther Schuller “invented” to describe the music created by the Modern Jazz Quartet in the 50’s, which was a confluence of the European Classical tradition streaming with cadenzas, infused with swaggering swing and syncopations of jazz idioms to describe much contemporary 21st century music, which does the same. Labels of any sort would diminish the excellence of the music played by Mike Marshall and Caterina Lichtenberg, certainly two of the finest practitioners of that graceful instrument—the mandolin—descended from the Lute of the Renaissance era. Besides which, the beautiful flow of Lichtenberg’s expressive interpretations of the music coaxed, no doubt, by Marshall’s gentle, effervescent and irresistible crush on Brasilian music makes his delightful intransigence on Lichtenberg’s filigreed, baroque fluttering makes the music impossible to label one way or another.

Does Marshall make the creative leap in to the realm of the European or does Lichtenberg flutter and gambol in the uninterrupted sertã of Brasil? It does not seem to matter as the transcription of Bach’s “Violin Sonata III in C Major” belongs not so much to the tradition of the baroque cathedral, here but to the Elysian fields of the pampas or the sertã of Brasil, at least this is what the collision of cultures brought about. Not that it was consciously done by the artists. It is just that it happened. Recto verso the whole effect when Marshall and Lichtenberg play Jacob do Bandolim’s “Assanhado” and “Santa Morena,” or Zeguinho da Abreu’s “Nã Me Toques,” or even—though not at all surprisingly—Marshall’s own beguiling compositions, “The Cat, The Mouse and The Chicken” a piece that dazzles animatedly as it tells a story full of the pathos of a Charlie Chaplin short, marked with classical sadness, and “Dec 29th” which is more ominous and with murkier antecedents. Both his songs mark Marshall a clever composer, who mixed media and has a fine sense of putting the narrative together with vivid pictures and compelling storytelling.

Both players are at the top of their respective games as they advance from one chart to the other. Lichtenberg is fey, almost shy as she expresses herself with delicacy and feminine grace. She flutters like a bird of paradise on the strings seeming to make the notes hang much longer than they are prone to do with a mandolin. Marshall is sinewy, yet seems to conjure a kind of yin-yang approach to his soloing. The androgynous pretence makes for a calculatedly singular style that is neither harsh nor slender, but, like a mysterious being, Marshall always seems to inhabit a magical place somewhere between earth and sky as he lets his mystique unfold with hypnotic splendour.

What a marvellous, utterly memorable piece of work this is from Mike Marshall and Caterina Lichtenberg—such a seemingly hard act to follow for any mandolin players.

Mike Marshall on the web: www.mikemarshall.net

Caterina Lichtenberg on the web: www.caterinalichtenberg.de