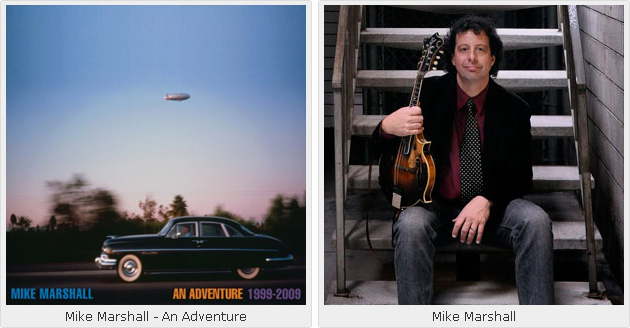 Few musicians deserve a retrospective more richly than the mandolin player, Mike Marshall. The ground-breaking, genre defying instrumentalist and composer has melded his prodigious skills with musicians as far removed as David Grisman and Darol Anger, Bela Fleck and Caterina Lichtenberg… to where his heart lies most comfortably and gracefully, with Brasilian musicians such as Hamilton de Holanda and Hermeto Pascoal. Marshall’s career has spanned much more than a decade. However, this album, An Adventure 1999—2009 features his work in various contexts for just the years that he helped form the Adventure Music label with Richard Zirinsky, and recorded with that truly artist-oriented label.

Marshall’s work during this time was truly distinct. There is work here with artists such as the virtuoso violinist Alex Hargreaves and also the wondrous violinist, Darol Anger that was recorded just over a year or two ago—albums such as Big Trio and Woodshop that produced tracks such as “House Camp,” “Back to the Castle” and “Peter Pan” as well as “Borealis” that contain some of the finest work that has bluegrass inflected. Further back, in 2007 there is collaboration with the Scandinavian group V&#228sen, together with Darol Anger that explores more exotic avenues such as the ululations of Middle Eastern sounding melodies such as “Egypt” and the Nordic mythical elements brought delightfully to life with “Loke’s Troubles.” The violinist, Anger, is more than a casual collaborator with Marshall and he is featured again in an earlier Adventure album with Marshall. This one is 2005’s Psychograss, a voluptuous album that yields “Into the Lion’s Den” and “Stroll of the Mud Bug,” both of which are moveable feasts for Marshall fans and feature rich harmonies with Anger as well as banjo player, Tony Trischka and guitarist, David Grier.

Then there are the memorable Brasilian albums. The earliest is the 1996/2005 album, Brazil Duets from which the two duets—with Andy Narell on piano this time—“Um a Zero,” Pixinguinha’s wonderful choro, and “Indifference” with the great banjoist, Bela Fleck are culled. In 2004 Marshall recorded an album of some of the best-known choros, Choro Famoso and this album produced two of the finest tracks on this retrospective, “Sarau Para Redam&#233s” and “Um Abra&#231o Seu Domingos.”

But the most memorable of all the work represented here is on the 2003 album with fellow Adventure Music alumni, Jovino Santos Neto, the extraordinary Brasilian-born and raised multi instrumentalist, who was formally musical director of the legendary Hermeto Pascoal’s group before lighting out on his own. The album, Serenata also yields two tracks, “Serenata” with Santos Neto on piano and “Quando Mais Longe, Mais Perto” which also features Pascoal himself on bass flute. The other unforgettable album is “New Words” (2006) with magical duets featuring the new sensation, Brasilian bandolim player, Hamilton de Holanda. The traditional track and an extended medley with Ernesto Nazareth’s “Blackberry Blossom/Apenhei-te Cavaquinho” is a fascinating reminder of the unbridled genius of both de Holanda and Marshall. The crowning moment must surely be the Irish jig-inflected, “Brejeiro,” which features de Holanda on an Irish bouzouki, a lute that he has mastered and on which he waxes eloquently.

Significantly, Marshall also excels on the air, “Angels We Have Heard on High,” from the 1997/2008 album, Midnight Clear, but this time he is heard on acoustic guitar, an instrument he rarely plays. However this is one instrument that might be grist for his grinding in the near future—perhaps a pensive solo album from the ingenious fingers of Mike Marshall.

Mike Marshall on the web: http://mikemarshall.net