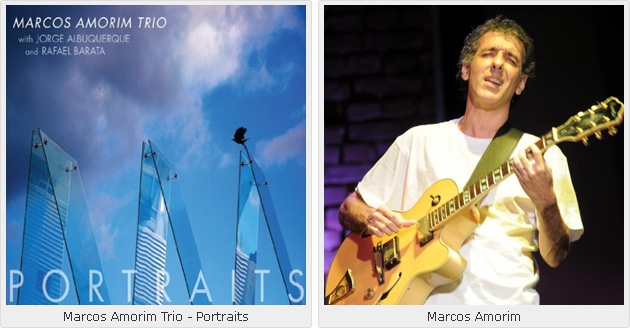 The music of guitarist Marcos Amorim penetrates the air so softly as he bends and folds notes gently creating a sort of glimmering light that wraps each note and phrase with a kind of warm glow that flickers and jumps where the accents of the music fall. Amorim is unique in that his music is a gilt-edged melding of Carioca rhythms and an almost vocal version of the ebb-tide of warm Atlantic waters that flavour the special voicings of Rio’s best singers. Of course Amorim does not sing—not on this album, Portraits or on his other albums, but his guitar does all the same. Even when the guitarist plays in clipped, staccato manner, his long lines appear to be soft and rounded at the edge of each phrase. Thus he gives the impression that he is using his finger and thumb always—even when he courses the strings with the plectrum, searching for that gracious tone with which to deliver his ideas.

Amorim is a thoughtful player, sharing the course that the music takes with bassist, Jorge Albuquerque and percussion colorist, Rafael Barata, both of whom appear to have such an empathy with the guitarist that they appear to share a musical brain. Amorim starts the chain of events by inventing a line, born of a fanciful idea. He then lets the gauntlet open slightly and seemingly invites Albuquerque in. The bassist embellishes the line with tonal and timbral values that dapple like sunlight on a window sill. Barata might jump in if invited to rattle the music with almost harmonically tuned percussion. The stretching of one such a line is brilliantly displayed on the brooding portrait, “Daniel” where the musicians exchange ideas frequently as each urges the song forward towards its inevitable destination: the complete sketch of the persona in question.

Rhythmically Amorim displays much virtuosity and deft expression as he charges onward through the energetic shuffle of “Maracat&#250.” He is much more circumspect in the manner in which he delays the rhythmic advance of the chart, on “Portraits” and, especially, the magnificently laid out “Bantu.” The diminished chord changes that flavour the former tune and the spacious melody provide a roomy interior in which Amorim crafts his great curved harmonies, chased down by the resonating electric bass of Albuquerque and the polyrhythmic effervescence of Barata rumbles and brassy splashes. The spare voicings of the music is also in beautiful evidence on “Morning,” “Leblon” and “Prece.” The electric urgency of “Ribeirinha” and the ghostly percussion on “Amarak” make both charts impossible to predict as they progress mysteriously onwards.

The majesty and mysticism of “Music Box” make that chart a perfectly tantalizing one to end the session with. In normal circumstances an album that barely ever rises above sotto voce almost throughout might have been somewhat difficult to endure for the length of time that Portraits lasts. However, the relatively impenetrable mystery of the music on the album keeps it always fresh and stunningly beautiful. It also marks a new phase for the guitarist that keeps Brazil’s great tradition of guitarists alive and well and, well, on a roll.

Marcos Amorim on the web: www.luzdaluamusic.mus.br