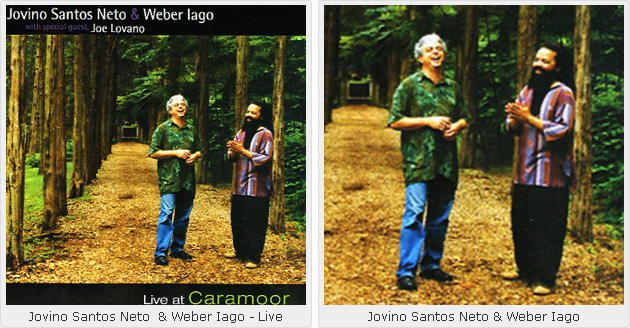 The most striking aspect of this package is its utter perfection. Artists always strive for this no matter what, but as Eric Dolphy once suggested after a particularly wonderful recording a short time before he died in Sweden, the magic is so fleeting that if you miss the moment it is gone forever. Fortunately there was the recording that Dolphy had just completed – a radio broadcast on Swedish Radio – that captured the magic forever. And now there is this record by two virtuoso pianists and towering musicians. Live at Caramoor captures the many moments of sheer perfection that were exchanged between Santos Neto and Iago throughout the concert at the Caramoor Jazz Festival, Katonah, New York on July 28, 2007.

The moments are musical – when hands, both left or right, hands extended by Jovino Santos Neto or Weber Iago onto the keyboards of their respective pianos picked out notes and phrases… solos that meandered around melodic ideas… or brave new harmonics were created that stunned the senses. Some magical moments had simply to do with the purely sonic experience because the hand crafted Fazioli pianos – that Santos Neto and Iago played – sounded as if the notes were always meant to paint songs into sonic canvases. And there was that ultimate moment of absolute magic when Joe Lovano joined these piano masters on stage to bring the great Brazilian master Antonio Carlos Jobim back to life with a stirring rendition of “Wave”.

Weber IagoPerhaps this was exactly what was expected – or at least hoped for – when Jim Luce of the Caramoor Festival invited Santos Neto and Iago to perform there. It sounded like that. Iago opened the set with his own composition appropriately entitled “Navigator,” a brooding (opening) track that painted the broad, expansive strokes of the concert. Then, “Alone Together” follows and this is almost completely unrecognizable from the original, which is truly amazing because that says this is jazz made new seemingly from the air. Then Jovino Santos Neto makes his appearance and what better way than with a track from the songbook of his dear friend and compatriot a master of surprise, Hermeto Pascoal, “Balaio”. The Brazilian artistry continues unabated – and a mood swing ensues: saudades is in the air. Pixinguinha and Vinicius de Moraes’ “Lamentos” is one of those songs that is not just performed, it sounds as if the notes themselves weep.

The Caramoor is a perfect setting for the next set and the masterful version of “Choro pra Nos” – with more mood-swinging pianissimo. Also more of that “alegria” with “Ser Feliz” and a meandering, masterful journey across a beautiful soundscape on Weber Iago’s tantalizingly brilliant, “O Fim do Comeco”. That is just before Jovino Santos Neto picks up that quirky reed keyboard instrument he plays so well, the melodica and because of its almost clown-like tones “Desafinado” is most appropriate – right down to the pitchy, off-key glisses as Santos Neto slides through the melody while Iago makes the harmonics sing in tune. And then the surprise: Joe Lovano joins the piano masters to close the perfect evening with Antonio Carlos Jobim’s “Wave”. This music will be remembered as one of the finest live performances in jazz piano repertoire. Musicians of towering stature, a memorable program and pianos so perfect their sound will echo in the memory for a long time to come.

Tracks: Navegante (Navigator); Alone Together; Balaio (Basket); Lamentos (Laments); Choro pra Nos (Choro for Us); Ser Feliz (Being Happy); O Fim do Comeco (The End of the Beginning); Desafinado (Out of Tune); Wave.

Weber Iago on the web: www.myspace.com/weberiago