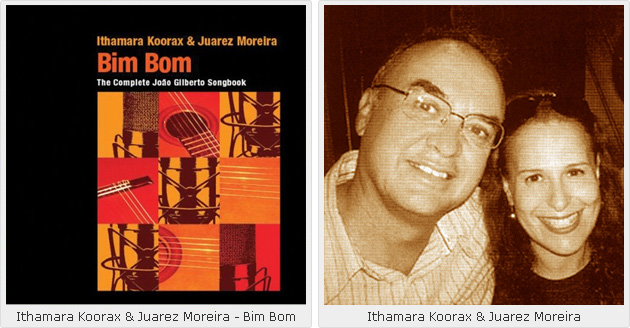 João Gilberto did not just epitomize bossa nova, “The New Thing” that he virtually invented, but he also brought his new laconic vocalastic style to Brasilian music. So deeply passionate and idiosyncratic was his annunciation and intonation that he could wail and groan with equal lyricism. Pitch did not seem to matter as the mood and passion of the emotion often took precedence over all other musical considerations. This was always the highlight of a João Gilberto performance – whether live or on carefully produced studio recordings.

Now comes Bim Bom: The Complete João Gilberto Songbook, an affectionate tribute to the maestro from a younger Brasilian vocalist, Ithamara Koorax. The singer is a perfect foil for João Gilberto’s singing style, yet one who captures the floating lyricism of Gilberto’s music while herself soaring vocally like a thrush in the throes of a swirling thermal wind. She is accompanied by Juarez Moreira, a guitar stylist whose fingers fly exquisitely across the strings to replicate the sound of a broader string section. Moreira is also so skilled that he recreates the crisp accompaniment that João Gilberto often provided himself.

Ithamara Koorax has a voice that soars with celestial grace. It floats and sways as if nudged by a heavenly breeze. Koorax’s vocals can sometimes flip and flop and tumble like a bird in flight. She has complete control over her breath, letting it slip like a sharp flue through her lips. At other times, she may choose to reach deep beyond the bottom of her lungs and in to her guts, to draw great gusts of air, which she will then fill with lyrical swirls and stutters as she forms the words of the songs by brushing this hot breath onto them. Thus the lyrics melt in the heat of her lips that caress them, uttering phrases and memorable sentences that pierce like arrows into the heart.

Ithamara Koorax becomes each song that she sings in wonderous tribute to the maestro, João Gilberto. She is a puckish child playing with words on “Bim Bom.” Koorax becomes all brown up and sensuous as she strikes a pose on “Hô-Bá-Lá-Lá” and on the lustrous, “Minha Saudade.” On “Você Esteve Com Meu Bem?” Koorax recalls every great vocalist who ever covered this song, from Carmen Miranda to Mariza to Caetano Veloso. “Bebel” is a superbly crafted, affectionate waltz for Gilberto’s equally talented daughter, Bebel. Ithamara Koorax has made this a slow burning torch song, so graceful that it glows like molten metal running through her perfect throat. In addition, on and on she goes waxing and waning like a perfect lunar apparition.

The baiao rhythm of “Undiú” is hypnotic and Koorax herself delivers this in a trance-like mode. The Mexican-inflected, “João Marcello” and “Acapulco” are completely surreal in that they capture the blazing heat of the barrio but always are softened by the temperate strumming of a Brasilian guitar. It is impossible not to notice the superb guitar work by Moreira, which is understated at the best of times, always subordinate and supportive of the voice of Koorax. However, every once and awhile he too soars above the music. Naturally, therefore the project could not conclude without a showcase of his skills. “Um Abraço No Bonfá” is just that vehicle for the guitarist to sparkle as if he were a whole string section at times.

To see this record as a mere tribute to Gilberto would be to diminish, somewhat, the superb vocals of Ithamara Koorax and the dexeterity of Juarez Moreira on guitar. Still with abject modesty, they offer this wonderful music in praise of the legendary Brasilian who ought to have been better known decades ago.