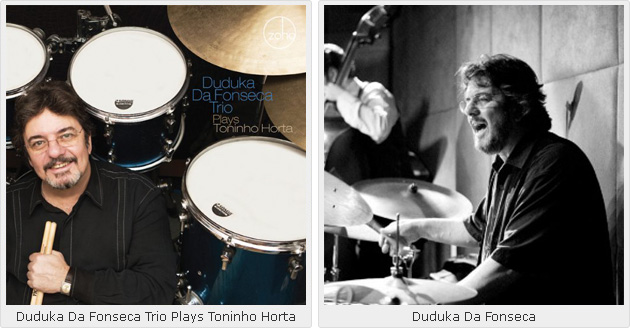 One of the main reasons why Brazilian music has been preserved and, more importantly, kept alive through the generations has been the readiness of newer generations of musicians to create repertory albums in homage to that country’s master musicians. Over the years there have been a slew of beautiful tributes to classical masters such as Heitor Villa Lobos, from João Carlos Assis Brasil’s legendary album A Floresta do Amazonas with Ney Matogrosso and Wagner Tiso, (Kuarup Discos) to the myriad ones to contemporary maestros from Ana Caram’s The Other Side of Jobim (Chesky), the stunning albums by Mario Adnet honoring Moacir Santos and Baden Powell (Adventure Music). To add to that ever-growing list comes an exquisite album paying tribute to one of the lesser-known, but equally masterful composer and guitarist, Toninho Horta, from one of Brazil’s greatest drummers of his generation, Duduka Da Fonseca.

Plays Toninho Horta marks the arrival of Da Fonseca as a masterful interpreter of fine repertoire and inasmuch, as he has made Horta’s music his own, something of a “composer” as well. Da Fonseca is clearly one of the finest rhythm colorists around. He is one of several musicians who followed in the footsteps of fellow-Brazilians, Santos, Claudio Roditi and Nilson Matta in locating themselves in the United States. In bringing their artistry abroad, these musicians have become virtual ambassadors for Brazilian musical culture in that country. As is the case with this great cultural collision samba and maracatu are now virtually germane to the ever-expanding rhythmic patterns of modern music.

But Horta’s music also brings a certain elegance and graceful to the art of song as well. This is recognizable no matter whether Portuguese is spoken and or understood where his music is played. Da Fonseca proves this with his skillful handling of the repertoire here. Much of this has to do with the beautiful understatement with which he plays, whether he is driving the rhythm forward as he accompanies pianist David Feldman and bassist Wirti, or in his solos. As an accompanist, Da Fonseca creates fabulous whorls of color and shade with his melange of rolls, tickles and bombs on the drums which are offset by the joyous splashes and tinkles on his many cymbals. The Brazilian backbeat constantly reminds the body that it must keep on swerving, swaying and pirouetting to Horta’s sensuous, delicious melodies. Da Fonseca’s solos are few and when Feldman and Wirti quiet down to let him take one, he flies, unfettered as if he and his drums are floating on great gusts of wind. Bassist and pianist bring him down only to take off themselves in what is a continuous display of sublime artistry that never seems to end.

Wirti also shines as he opens con arco, the hushed, aching lyricism of “Moonstone,” a piece that is one of Horta’s most beautiful torch songs. This song also calls to mind the mastery of Toninho Horta as a melodist. Few musicians are as capable as he is of such sweet assaults on the soul. “Francisca,” “Waiting for Angela” and “Luisa” are other reminders of Horta’s genius that rank him among the sublime creators of song—with men such as Jobim and Santos themselves as well as with Americans like Green and Sour, who created such unforgettable charts as “Body and Soul”. Such is the beauty of Horta’s music and the world would have been the poorer had not Duduka Da Fonseca and his Trio brought its beauty to us with this memorable album.