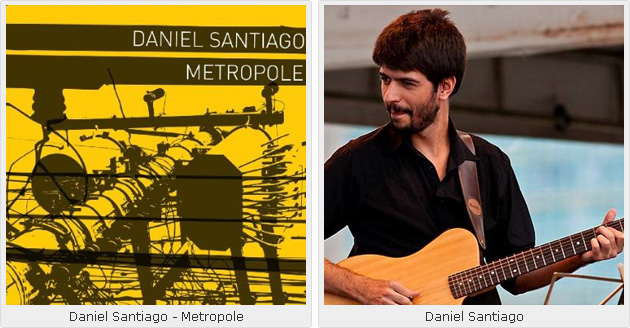 Daniel Santiago comes from a long and continuing line of renowned Brasilian guitarists. He has a lively and probing mind and the language of his guitar resonates with sparkling phrases, unusual syntax and an almost full-formed musical ideology. On Metropole, a thoughtful, questioning record, Santiago employs the distinct nature of being “Brasileiro” to explore his environment from a unique perspective: an urbane, worldly vision with a truly pastoral sensibility.

The music of Metropole is all about living in a contemporary world full of old colonial baggage, disturbance and conflict and a genuine concern for the future of humanity. This view, as the title of the record suggests, is one fraught with colonial and ecclesiastical overtones. “Metropole” in Portuguese colonial culture once referred to the “European part” of that colonial power. As Santiago’s fingers play with gentle irony on the strings of his guitars, the idea translates into a brilliantly conceived “colonized perspective.” Now the song titles – even the not-so-obvious ones – reflect loaded thoughts. Here are three examples: “Letter to the World,” “Children of War” and “Angola’s Dance.” The titles of other songs may be more suggestive, nevertheless they all work together to reflect the overall conception of the record. This is executed through well-crafted sound design and superior musicianship.

The music is densely textured. This appears to be deliberate and works well as the idea is to provoke thoughts using just sound, without words. It helps immensely that Santiago and his group is so in tune with what is required of the music that they seem to have an almost telepathic connection as far as tone is concerned. Further, the instrumental textures add an interesting and almost choral aspect to the music as individual voices express singular and plural aspects of the music. Interestingly – from the rhythm-driven Brasilian musical point of view, the two drummers play perhaps the most important role in the music.

Both Márcio Bahia and Edu Ribeiro create a unique percussive coloration – the magic carpet on which the music glides and slides as it moves in an ever-forward motion. The two men do not drum together but somehow each is able to create a dense “Amazonian” feel that swirls around the music. There is a constant ricka-ticka-rat-a-tat and more, a constant swish, splash and tempestuous working of the brass and bronze of the cymbals. The underlying rhythmic motifs are always “samba,” “maracatú,” “xote” and others – both hidden and exposed. It is as if the drummers are speaking for the ancient trees in the Amazonian jungles of the “real” Brasil. What they say in turn is an actual reaction to the dissonant march of urban progress – globally. The often-neglected rural cultures of Brasil are given unique squeeze room here to react through this wonderful and committed music group.

With the rhythmic bed created, Santiago with his electric and acoustic guitars, tenor and soprano saxophonist, Josue Lopez, pianist, Vitor Gonçalves and acoustic bassist, Guto Wirtti get to work, creating multi dimensional voices and choral music soundscapes. The record unfolds like a visual drama. Beginning with the song, “Old City,” there is an obvious reference to the cultured remains of the city, in urban conflict with the pull of time marching on without much reason. The odd and shifting rhythmic pulse keeps the tension going until the end. Santiago is the lead voice and he plays a clear-thinking protagonist as he expresses himself with lines and augmented notes, while the saxophone piano and bass meld together in an agitated musical underbelly. Yet nothing is resolved.

“In The Rain,” though not necessarily a leaf from“After the Rain” in the John Coltrane songbook is awash with more congeniality and even romance. The acoustic guitar, playing off the subdued piano enhances the feeling of closeness – almost suggesting a cuddle. “Gregorian Samba” is another deeply thoughtful song. Santiago uses an old, albeit commonly used Papal era: “Gregorian” to set up the profane era “Samba.” The interesting aspect of fulfilling the urges of the profane before the ulntra-significant spiritual season of “Lent” adds an interesting counterpoint to the music. The stage is set with a vigorous rhythm and wonderful mildly agitated, contrapuntal passages between piano and horns until Santiago brightens the dance with a darting sequence in a high-register that breaks the samba focus, perhaps introducing a character in the pagent, who returns it to a more spiritual setting.

In “Letter to the World,” Santiago sets the stage for a larger argument about future generations. Here, though, the horns and guitars set a brisk opening pace, obviously to create urgency. Santiago and Gonçalves then alternate to state their case clearly. The guitarist uses combinations of single notes and smooth linear lines and the pianist does the same, augmenting the harmony, often even adding to it. “Children of the War,” does not necessarily refer to “war” within societies. It really ponders the uselessness of involving a generation from whom we have inherited the earth. The mood here is sombre, with very limited improvisation, shorter more loaded guitar phrases and a dirge-like slashing agitation of the drum skins.

The musical narrative progresses through “Salamandra,” a startlingly sharp song from left field. It focusses on the six species of ancient salamander now extinct. The song has a swishing rhythmic swing to it and raises an interesting issue. “Traveling” and “Lagoon” push the pace of the record and the urgency also shows in Santiago’s solos. The lines are shorter and sharper and the ideas resolve themselves much quicker. “Miracle” may actually be linked to “Angola’s Dance,” An oblique comment on the manner in which the ravaged country is rebuilding its country after years of colonization. The vivacity of the composition reflects the fact that the country essentially rises above the bygone era and dances on. The bright pace of the song and the virtuosic leaps that each musician takes not only suggest that anything is possible – especially the proverbial rise from ancient ashes.

“Miracle” and “Within Us” bring the music closer to resolution. Both these tracks are inward looking pieces. They force another look at faith and character the humanity. Clearly, after Daniel Santiago’s, inward and outward motif in the song – and despite the rather uncertain nature of this risque sojourn – there is a suggestion that hope lies within us. In fact, “Within Us” features some of the most serious and challenging music – right from the bowed entry into the song to the swishing cymbals and highhat combinations that Márcio Bahia employs with such melodic expertise. The thoughful pace of the song and its major mode and beautifully augmented chords culminate in a final con arco closing that reflects commanding resolution.

This beautiful end to the record comes with “Metropole.” This is brisk and tantalizing piece with rapidly changing rhythms. Again, that characteristic swish and splash agitation, that so sets the record apart, is heard and this brings an interesting bookended closing to “Old City“ at the beginning of the record. The song ends almost abruptly, but the suggestion here is that Daniel Santiago has much to say, if not now, then in the future. We await the next step from this fine guitarist who seems to love to shroud his finished product in the strings of mystery.

Tracks: Old City; In The Rain; Gregorian Samba; Letter To The World; Children of the War; Salamandra; Traveling; Lagoon; Angola’s Dance; Miracle; Within Us; Metropole.

Daniel Santiago on the web: www.myspace.com/danisantiago