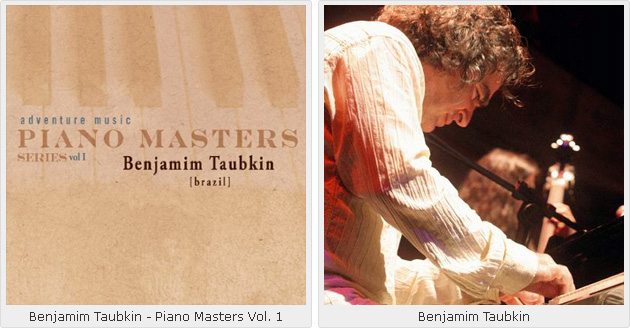 Any musician with the daring to attempt a solo project has to be on his game from the moment his fingers touch the keys. However few pianists—since the great Bill Evans—have shown unrivalled touch and expression as Paul Bley, Keith Jarrett, Michel Pilc and now the majestic Brazilian pianist, Benjamim Taubkin. Fortuitously, Adventure Music selected him to inaugurate their forthcoming series with Piano Masters Vol. 1. Here he plays mostly his own compositions, which are, in themselves, staggering in their architecture and scope; where Taubkin movingly navigates the expanse of the keyboard with such mastery that he recalls the staggering invention of Jarrett’s K&#246ln Concert (ECM, 1975) and the incredible feeling and expression of Jarrett’s other masterpiece, The Melody at Night, With You (ECM, 1999).

Playing with deeply felt emotions throughout, and also with a certain child-like playfulness (“A Melodia e a Semente/The Melody and the Seed”) Taubkin dazzles also with unsurpassed virtuosity, brilliant sense of time and a sense of touch and technique that is so flawless it is sometimes hard to believe that one man can do so much to embellish musical expression. All this might sound like fantasy, but it is so downright true that it stops the very breath of the listener. There are times on “Em Torno de Vibra&#231&#243es de Jacob (Around Jacobs Vibrations)” when it appears that the pianist is in a trance at a recital much like it must have been in the days when Franz Liszt was performing an etude or a piece, when he decided to include a devilishly brilliant cadenza into the proceedings. Taubkin also refurbishes Tom Jobim’s “O Morro N&#245 Tem Vez (Somewhere in the Hills)” with such dexterity that it is barely recognizable. He also gives John Coltrane’s “Giant Steps” a brilliantly whimsical rebirth turning the song on its head so much so that its melody is discernable only once and awhile. This is pianism at its breathtaking best.

Taubkin is unmistakably Brazilian. The energy and rhythmic idiosyncrasies of choro and samba seem to flow through his veins albeit is a subtle way throughout the album. The former shines through on Pixinguinha’s “Prozeas de Solon (Solon’s Exploits)” and the latter rhythms flavour the music in a hidden manner, as if the melodies incorporate them on a mystic plane. There is also a pulsating feeling in Taubkin’s fingers. The manner in which he varies the pressure of his fingers on the notes delivers a multitude of various colors, which never seem the same twice. Taubkin wields his fingers as if they were a myriad brushes dappling the keyboard as if it were a pianistic canvas. His ideas emerge from a cornucopia of sound that sends forth its riches in waves of utter beauty. “O Cora&#231&#225o e o Rio (The Heart and the River)” and the magnificent “Caipira” are two of the most beautiful examples of the rich flutter of sound that Taubkin seems to pull out of a veritable vortex.

This is an album that is destined to become one of those delivered on a rarefied plane. Without doubt it will be remembered as one of the finest in 2010, or any other year.