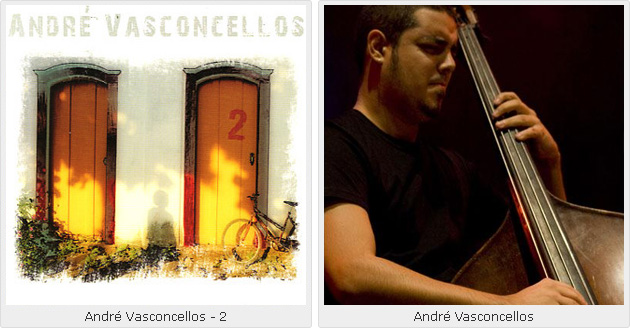 There is nothing predictable about the music of André Vasconcellos. To begin with, he is one of a crop of fresh Brazilian musicians that include guitarists Daniel Santiago and Yamandú Costa, mandolin-player, Hamilton de Holanda and, chief among them, pianist André Mehmari who are re-evaluating their native milieu and the idiom in which they write. They are doing this in relation to the Romantic Era of 17th and 18th Century music that brought them up at home in the first place. And then there is the inevitable surge of the currents of the late 19th and early 20th Century Impressionists from France—men such as the musicians, Claude Debussy, Maurice Ravel and Gabriel Fauré, painters like Monet. The Brazilians—inventive as they are—put all this into a sort of musical decanter, and in the heat of Amazonia and the polyrhythm of Africa, they sally forth with ever-new ways of expressing their musical ingenuity.

The bassist, Vasconcellos has distilled this complex array of influences into a music that is set against a background of rich, darkish tones and colors, which splash and swirl, tremble, vibrate and soar amid the sparkle and rumble of a myriad rhythms. Vasconcellos is also a sublime melodist. His music flows like an eternal river of song, which although grim and sad at times, always floats with rhythm and rhyme. Its poetics are deeply rooted in his fine sense of the ebb and flow of the art of balladry and the mighty heart of a troubadour. On 2 his work dazzles with many examples of this. His innate ability to light up melodies with complex harmonies is also in evidence. Here, Vasconcellos uses both piano and guitar to ignite an electrifying dialogue between his growling instrument and the pianism of David Feldman and Renato Fonseca, and the magnificent dynamics of guitarists Marco Vasconcellos and Torcuato Mariano. The slanting harmonics of saxophonist, Josue Lopez add a dramatic voice to the proceedings.

Vasconcellos is a deep romantic at heart. His vision is rooted in a sense of the imagistic wholeness of all things beautiful and ugly. There is no such thing as neutrality in his world. In this regard he seems blessed with a sensibility close to that of the great Brazilian poet, Manoel de Barros. In “Signals of Rain” and in “The Trip of the Elephant” he seems to leap and frolic in the poetry of the earth and all things in it. “Bullfight” is another musical tribute to the beauty of ugliness and gore. Vasconcellos also traipses across the rural landscape and into the urban one, but here too not without considerable sentiment and romanticism. “Rome” and “The Old City Ballad” delight without falling into the trap of sentimentality. Sometimes the musician’s music may dally seemingly interminably and at other times there is an energetic rush to the music that feels like a charge of the heartbeat felt in the heart as much as in the soul. “The Trip of the Elephant” with its deeply swaggering rhythm is very much like this in the manner of its progress. And “Spiral,” which is beautiful in its complexity also features a tantalising review of the art of Vasconcellos’ adroitness at the bass.

This album may not grip heart at first hearing, but letting go of all preconceptions of what Brazilian music must sound like today, its music creeps in to take hold of the unconscious tenderly crushing all sensibilities occupying body and soul together.

André Vasconcellos on the web: www.myspace.com/andrevasconcellos