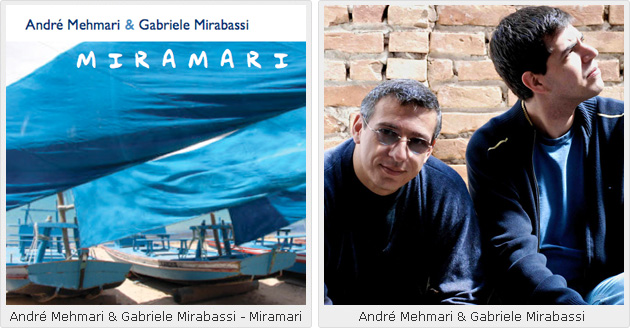 Miramari is a musical whirlpool that bubbles with rhythmic ripples and swirls in a manner, at that describes some gentle disturbance that gathers in intensity at times. It is in this mysterious, liquified realm that pianist, André Mehmari and clarinetist, Gabriel Mirabassi concoct their sublime music mixing disparate metaphors, idiomatic phrases and images. Somehow, by supreme plan, unbeknownst to any but these two medieval apothecaries a magical moving sonic picture forms before eyes and ears. It beckons the listener to also watch as it evolves and becomes now, dancers and singers with the soul of the Northeast of Brazil, now the Cariocas and the Paulistas…suddenly a Villa-Lobos flight of fancy, and swoops over Europe’s musical stage, conjoring Gabriel Fauré and Erik Satie.

André Mehmari has long been casting a spell on audiences wherever he has played. His firm hands have been blessed by long sinewy fingers that are surprisingly gentle when they touch the piano keys. Despite his preoccupation with the long and celebrated line of pianists of Brazil, he comes flying out of the tunnel of tradition quite his own man. His solos leap and bound with spiritual fervour in a linear manner, as in “Um Anjo Nasce,” to start with, before turning tantalisingly circular. Brevity is his forte and he does not waste notes, preferring instead to contribute expression–in overtones and dynamics–to overall sound.

Gabriele Mirabassi is a master of the clarinet, that difficult woodwind instrument. He is expressive tremendously, making his licorice stick sing like an operatic aria. He is the equal of anyone on this instrument from Artie Shaw to Maurice André. He can play with deep intonation and classic phrasing so sweetly that he often makes magical choral voices emerge skyward out of his softly fibrilating reed.

On Miramari these two musicians have a whale of a time travesering landscapes awash with music, like rushing down a mountainside in Amazonian splendour. They thrive in the gamboling free, yet bow to the art of the rondo (“Rondoletto Per a Bambini”) and ponder in the somber beauty of the nocturne (“Perugia Notturna”). They dance around each other like petal-whorls in Valses (“Chove na Minha Valsa” and “Uma Vala em Forma de &#193vore”.) They weep, wide-eyed and ecstatic in the environs of “Choro da Continua Amizade” and dance interminably in the eternal spring of “Brilha o Carnaval”.

Most often than not, they meander in the invention of their own design, playing melodious and rhythmic tricks on pulse and time by darting in and out of subtly changing tonal colors and hues. The record is replete with several examples of this, but “Disarmati” and “Mirabilia Mirabassi” may be sufficient to drive the heart to vivid palpitations.

Here is a record of great accomplishment with stirring content performed by musicians of genius. This refers not only to Mehmari and Mirabassi, but also to a percussionist, Ricardo Mosca and bassist Z&#233 Alexandre Carvalho, who plays with stirring pizzicato and a certain gravitas in pedal point.