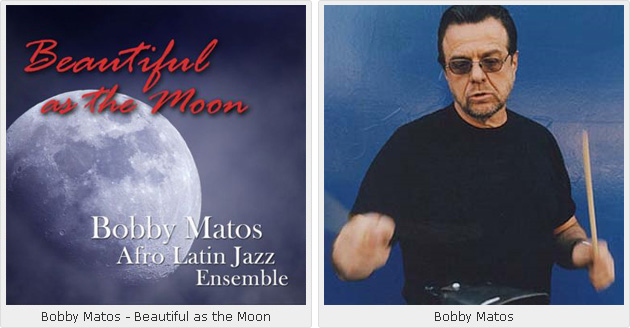 The master timbalero, Bobby Matos not only carries on the great tradition of the timbales that he inherited from El Rey, Tito Puente, but finding inspiration in holistic healing, he has also developed deep roots in a Zen-like alchemy that melds mambo and rumba, with the jazz idiom. And then there is that delightful surprise that Matos springs—a magical touch of Jewish klezmer, rooted in an authentic Yiddish tradition. The results are always marvellous, especially when the music unfurls with that haunting violin of Danny Weinstein, referencing familiar and classic klezmer music. Of course Weinstein plays with swaggering glissando and can swing in any idiom as he shows on this excellent album, Beautiful As The Moon (LifeForce Jazz Records – 2010). In fact, Weinstein may be one of the main reasons why this album sticks in the memory. His sly, humorous quotes from “Fiddler On The Roof” are as wonderful on the ear as the swinging attack of his boppish bowing on “Fiddlunky”.

Weinstein also does a stellar turn on trombone, on Thelonious Monk’s lovingly crafted ballad, the whimsical, “Monk’s Mood”, which the band unwinds, as Monk always did, with great patience and ever-wonderful surprise. In Matos’ masterful mambo arrangement tenor saxophonist, Pablo Calogero and pianist, Theo Saunders converse as the song tumbles down, just as Monk and Charlie Rouse once did, but only the latter musicians remained elusively elegiac throughout.

Lest it seem that Weinstein is the sole hero of this recording it must be said that Matos is particularly hidden, but a strong force, nevertheless, guiding the rollicking rhythm with commanding gentility. Although he is more taciturn than his illustrious mentor, Puente, Matos is, nevertheless, a sublime technician, who can shift his rhythmic accents with alacrity. He shows all his mastery of the instrument on his quirky composition, “Pop Moish,” much to the delight of the other members of the ensemble, who play with great humour, maintaining the racy twists and turns that the piece manifests as it moves forward in labyrinthine manner. Here Matos is ably assisted by his conguero, Robertito Melendez, whose slash and slap on the taut skins of his congas is elegant, yet curves into the air with sharp sassiness.

John B. Williams is a bassist extraordinaire and he excels on “Fiddlunky” especially, but also dances around the deep root notes of “Early Morning Song,” on “Santiaguito” as well as the gorgeous arrangement of Herbie Hancock’s classic chart, “Maiden Voyage”. In the end, it is really the truly masterful ensemble affair—or as Matos likes it remembered, a family affair—that makes this album what it is: A wonderfully accessible album that has many hummable, danceable and utterly memorable moments. Matos and his Afro-Latin Jazz Ensemble warm the heart and touch the very soul.

Bobby Matos on the web: www.bobbymatosmusic.com