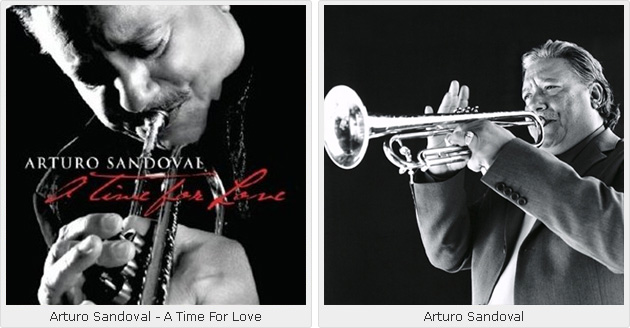 The great trumpeter, Maurice Andr&#233 and Wynton Marsalis apart (who play in other musical realms as well, everybody really serious about the idiom of jazz—about music in general—dreams about making a recording with a string ensemble. Louis Armstrong made What a Wonderful World, his album of Broadway, Hollywood and standard charts. Cornetist, Warren Vach&#233 made his, Don’t Look Back (Arbors Records, 2006) with the Scottish Ensemble. The list goes on. Now to add to that Cuban-born trumpeter Arturo Sandoval who has released the simply titled A Time for Love. Although this is Sandoval’s first album with a string orchestra, he actually made another orchestral album, Dream Come True (GRP, 1993). That one featured a brass and woodwinds section on some charts, and a brass, woodwinds and string section on others. Both orchestral segments were conducted by pianist and composer, Michel Legrand.

But this album is special—the effect of playing ahead of just strings is special—and Sandoval makes full use of the length and breadth of his talent for the romantic throughout. His playing is uncharacteristic of what he is accustomed to doing with his horn. He plays softer even than the Danish trumpeter and flugelhorn player, Palle Mikkleborg on Song… Tread Lightly (Columbia, 2000). The string arrangements by conductor, Jorge Calandrelli and pianist, Shelly Berg are marvellous and Sandoval plays both trumpet and flugelhorn—sometimes one atop the other—with such majestic facility that he sometimes conjures up visions of being carried up on the wings of angels. His intonation is perfect, as is his phrasing and he plays low, almost like Nat Cole singing.

The musical repertoire is of a very narrow spectrum. Almost all of it is romantic and some of the charts are so elementally sad that a generous helping of Kleenex might be suggested. Sadness equals catharsis in this case. The cleansing spirit of Sandoval’s playing is especially evident in “Oblivion (How to Say Goodbye,” a song he shares with the devastatingly beautiful voice of Monica Mancini; in the Charlie Chaplin classic, “Smile,” which he sings himself, in a surprisingly beautiful tenor and in “Every Time We Say Goodbye.” But the most elementally and evocative music is heard on the pieces by Gabrielle Faur&#233—“ Apr&#233s Un Reve” and “Pavane”, and on Maurice Ravel’s masterpiece, “Pavane Pour Une Infante Defunte”. Here Sandoval bends and twists his horn as he squeezes every ounce of emotion possible from it. The strings in the background and Sandoval’s quartet too are magnificent as they back his every note on trumpet, muted and open belled and on overdubbed flugelhorn with rarefied grace.

The Ravel piece also features the horn of Chris Botti, who is sometimes cast in a setting so popular and facile that he is often mistaken for a tactless player. This duet with Sandoval, however, will surely indicate otherwise. Kenny Barron, that other player who is sublime in his reading of the romanticism of music is featured on “Every Time We Say Goodbye” and he is one of the main reasons that this chart is breathtakingly beautiful. But really, A Time for Love is a triumph largely because of Arturo Sandoval’s playing, which is of the highest order throughout. Jorge Calandrelli also makes the project worthwhile with his sensuous arrangements of charts that sound as if they were written especially for this project.

Tracks: Apr&#233s Un Reve; Emily; Speak Low; Estate; A Time For Love; Pavane Pour Une Infante Defunte; I Loves You Porgy; Oblivion (How to Say Goodbye); Pavane; Smile; All The Way; Smoke Gets In Your Eyes; Windmills Of Your Mind; Every Time We Say Goodbye.

Arturo Sandoval on the web: www.arturosandoval.com