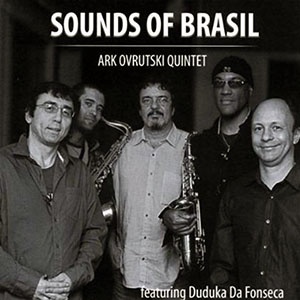 That Ark Ovrutski is following his heart in pursuing the art of music is creditable. But that he has made it his mission to play the promptings of his soul is quite another matter—the fact that that these are in the swaggering rhythms of Brasil—and make his pursuit of his art a magical experience for those who share it with him. Ovrutski is a musician, a bassist and a composer of no mean ability. Brasilian music—even the relatively easy to count samba beats—is a complex matter. Moreover, it is not a mere matter of understanding how the shuffling rhythm works; but rather a secret relationship of the soul and the Brasilian sense of saudade, for instance, and more than speaking Portuguese, it is an inner world in which the artist must dream as well. This is what made tenor saxophonist Stan Getz develop a special connection with Antonio Carlos Jobim, and make room for the spirit world of Brasil in his heart. This is what makes pianist and composer Jon Gold a Brasileiro and that is the honorary title that Ark Ovrutski has also earned for himself.

Ovrutski’s considerable abilities as a composer of music in the Brasilian mode have been celebrated on his fine album, Sounds of Brasil. The album features and was also produced by the great Brasilian percussionist, Duduka Da Fonseca. However, no one, but Ovrutski can take credit for the remarkably beautiful music that has been created for the session. For starters, the bassist begins the album with a mesmerising Partido alto in the form of a dazzling composition called “2nd Line/Partido Alto”. The euphoric nature of the piece and the gentle banter between bass and percussion, and the horns puts this composition in the exciting samba/improvisation mode and it is what makes the music classically Brasilian.

Of the other music in this session, “Mr. Hindemith,” a reference to the great 20th Century classical musician is a fine choro and contains some truly interesting ideas in the contrapuntal nature, in which the piece has been written. “Brasilian Carnaval (Take 1)” and “Brasilian Carnaval (Take 2)” are staggeringly beautiful and truly authentic compositions with a truly heartfelt Brasilian sensibility, as is “Samba in 4th”. Although the composer must take a major share of the praise for the architecture of the music here, much of the credit must go to Duduka Da Fonseca and Brasilian pianist, Helio Alves, both of whom drive the samba groove with relentless vaunting rhythm and this is what gives the music its memorability. But spare a kind thought also for the horns of Craig Handy and Jorge Continentino who are brazen, articulate and extremely sophisticated.

Ovrutski’s other skill is in the writing of ballads and his two—the elegiac “Song for my Mom” and the soaring “Baby’s Vibe” are exceedingly beautiful. What makes this just so is the fact that Da Fonseca alters his style to an infinitely softer and delicate one so he can capture the essential beauty of the ballads and Helio Alves also follows suit here. Together drummer and pianist join forces to create an atmosphere of delicate beauty. This is a fine album and now that Ark Ovrutski has established clearly his “Brasilian credentials” much more will be expected of him in future albums to come. For now, though, this is one memorable album that will grow in appeal every time it is played.