Amanda Ruzza is one of a whole slew of talented musicians to come out of Brasil in recent years. She is a versatile bassist, a fine composer and a musician with an individual voice that appears to have absorbed a whole history of Brasilian music from the traditional Chôro to the Bossa Nova of Johnny Alf and Joao Gilberto and Antonio Carlos Jobim right down to the moderns such as MPB and its revolutionary spin offs from Caetano Veloso and Gilberto Gil to Os Mutantes. 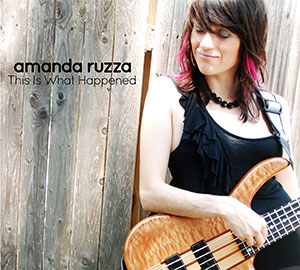 The latter is important because the young group were shaped by tradition, but changes the playbook of almost every kind of idiom that came before them. Ms. Ruzza may not have heard their music but she seems to have arrived at the same rebellious path no doubt influenced by the music of modern masters of the bass such as Jaco Pastorious, Marcus Miller and Victor Wooten. However, having absorbed their music, Ms. Ruzza has set out on a rather individualistic path cut from the shrubbery of the sertão as well as the concrete imagery of the Cariocas and the Paulistas mixed in with large doses of her own iconoclastic voice.

Ms. Ruzza’s playing usually appears percussive without the de rigueur slapping and hammering on. Somehow she gives the impression that she is playing bass and hammering a surdo all at once. Her soli are dappled with gymnastic parabola followed by leaps from plane to plane using the triggers of dramatic double stops to make those fabled leaps of a proverbial bass clef. Ms. Ruzza also plays beautiful inversions of her melodies almost as if she were creating whole new melodic lines within her bass lines; and she is known to dart up and down her fret-board like an excited impala and this she does on the two Chôro songs that she has composed and plays brilliantly: “Pagão” and “Pimenta no Chôro”. On the latter she builds her solo like an architect and ends up creating a beautiful edifice with a magical narrative, before handing off the melody to pianist Cliff Korman, who then swings away with the new-found energy of the Chôro. On other songs, such as “Gin” and “Larry and I” she is more workmanlike and sounds almost like the hammering of sheet-metal on strings. But she never gets serious and boring which are what many bassists who play with such a full-frontal style can end up being.

Much of the shape of the music has to do with carving out a fine production with seemingly disparate musicians. While David Binney and Cliff Korman as well as Mamiko Watanabe and Alex Nolan as well as Chris Stover are fine musicians their reading of this largely Brasilian fare is admirable. Technically superlative musicians are not necessarily fine sight readers. Mauricio Zottarelli has much to do with shaping the sound of this music. Mr. Zottarelli is not only a fine percussion colourist, but is also shaping up to be a producer with a fine ear for the landscape of sound. It seems from two recent productions, Mozik (2011) and this one, that Mr. Zottarelli is fast maturing into someone who can manage to create that wall of sound on which a whole record can affix itself onto. This is something that a musician is born into and can only improve with age. Amanda Ruzza is fortunate to have Mr. Zottarelli in the producer’s chair and the results are memorable enough for anyone willing to listen as well.

Track Listing: Larry and I; Pagão; Costanera; Monday, 3 am; Pimenta no Chôro; Gin; This Is What Happened.

Amanda Ruzza on the web: amandaruzza.com