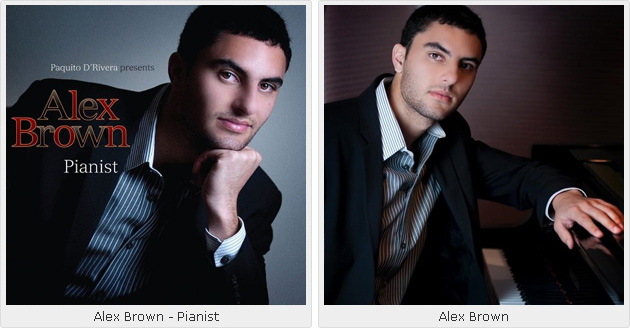 Even for a pianist with as prodigious a talent as Alex Brown, having a heavyweight in the music pantheon such as Paquito D’Rivera produce his debut album, must have largely been a dream. However, to pull off a debut as fine as this is a feat in itself. As a pianist, Brown has remarkable technique. Although he may still be searching for his true voice and that may take time, he appears to be closer than most. He is truly expressive and has an expansive sense of time. Brown’s sense of the acute and obtuse accents of a melody is rivalled only by his sense of how to lay down a surprising harmony. With his strong left hand, playing seemingly every kind of rhythmic figure almost at will, Brown can create memorable phrases, sometimes surprising the listener with classic Afro-Cuban tumbao, as much as he can by conjuring up a contradanza, or even a valse. And then he can swing and bop too…

On the album, simply entitled, Pianist Brown serves notice that he is well on the way to being a leader that musicians will rally around. He is never overawed especially by the presence of such mighty musicians as Paquito D’Rivera, whose classically sharp alto and woody clarinet graces several tracks and he even gives the breathtaking percussionist, Pedro Martinez good reason to believe that he can shuffle that rumba tempo with swaggering confidence. Latin American musical idioms seem to be Alex Brown’s strong suit here and his gentle Bossa Nova swing that he introduces in “Lamentos” with seeming casual grace is, indeed a perfect example of how proficiently he captures the idiom, before he breaks up the song midway, only to return it to if much brisker samba rhythms. Of rhythms it appears Alex Brown appears to be a special kind of maestro.

There is a back-story here and it is one of great promise. Not only does Brown rally his musicians, especially the young ones, trumpeter Vivek Patel, bassist Ben Williams, drummer Eric Doob and marimba player Warren Wolf, but he also draws experienced men like D’Rivera and Martinez into his compositions that are compact, yet roomy enough for galactic leaps as the men improvise. It appears that not only is Alex Brown the pianist about to arrive, but the Brown the composer is not far behind at all.

Alex Brown on the web: www.alexbrownmusic.com