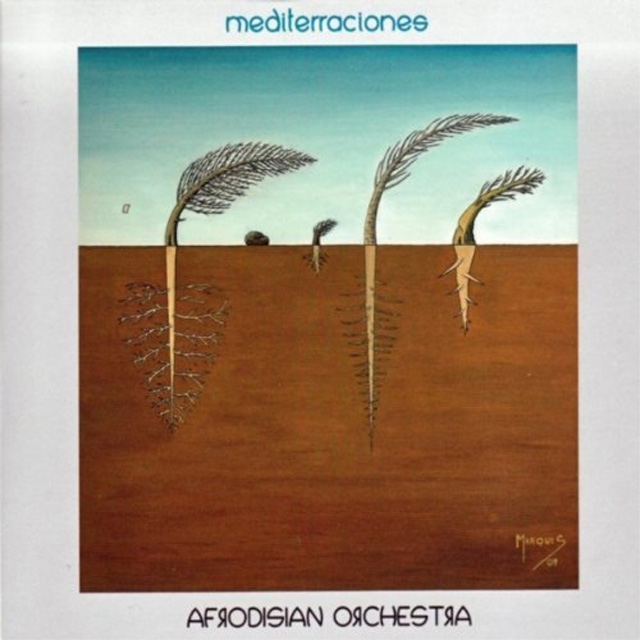 Few records in 2009 are going to have such an impact on the world of music as Mediterraciones by the Afrodisian Orchestra. This is because there are few, just a few musicians – even native Spanish ones – who have come to imbibe completely the incredible ethos of Spain. The myriad influences – from religious (Jewish, Christian, Muslim) to ethnic (Western Gothic, Moorish, Arabic, Indian, Romany) – have collided and created a rare cultural combustion in Spain, more than anywhere else in Europe. The fire burns most fiercely and bright in poetry, music and dance. No one can quite pinpoint why these Spanish arts are so captivating. Theories abound but because these are so academic, they only sound pedantic and serve to make appreciation of the arts tedious.

Mystery and magic lie at the heart and soul of artistic creation. It is better to leave it at that, or better still to put it all down to “duende”. This is one of those mystical, indefinable words that pierce deep in the heart of Spanish culture. The great Spanish poet, Federico García Lorca wrote that “duende” could only be in the depths of abandonment – in the “final blood-filled room of the soul.” Its power is likened to a moment which transcends time… a moment of immortality. Among musicians alive today, guitarist Paco de Lucía captures this. So does pianist Chano Domínguez, the bassist Renaud García-Fons. And now, it seems that Miguel Blanco has brought together a group of musicians who display a remarkable ability to radiate this magical quality.

The music on Mediterraciones from the Afrodisian Orchestra brings alive all traditional musics from Spain in a molten mix of volcanic lava. The energy generated by this record palpitates throughout. Miguel Blanco, bassist and musical director winds up the musical tension to such an extent that there is no let up until the final notes of the eighth track resonate in the inner ear and finally die down. “Desarraigo” sets the pace. This is a fiery flamenco sketch carved out and applied to the big band juerga setting. It has all the makings of a traditional flamenco – cante, baile (suggested by the cracking handclaps and superbly resonant cajón by percussion colorist, Jorge Pérez) and guitarra from Israel Sandoval. The glue that binds it all together is memorable glissandos that slide form the mouthpiece of the soprano saxophone of Jaime Muela.

“Retumba,” explodes in thunderclaps and is more sinister, which goes miles in winding up the tension of the music. Muela plays the fabled Turkish flute, the ney, here and the aching sound creates a glacial character for the composition before Raul Marques’ trumpet moans his solo in a slow-drag manner, with the emotional intensity of a cante jondo. Then Israel Sandoval’s guitar solo, like an outpouring of the soul, almost conjuring up ancient soleares that twists down to a Jimi Hendrix-like conclusion. There is only a brief respite during “Nonna I Nil,” its beguiling title belies the softness of its balladry. Both keyboardist, Marta Sánchez and in a rare turn, Miguel Blanco excite and agitate the music delightfully. The Afrodisian Orchestra has a warm glow burning throughout and Jorge Pérez taps his udu drum as José San Martín creates bright cymbal splashes.

“Boletus Obsoletus” is a quirky arabesque of a song that inhabits a kind of electric fog. Its mystery deepens toward the middle of the piece where Roberto Pacheco’s trombone solos in dissonant fashion, while Blanco and the percussionists provide veritable bedrock under the solo. “Habanera Excentrica” has a rough-timbre vocal-like harmonic progression to release an almost ravaged core of the song. The incisive rhythm is coupled with a white-hot near violent emotional intensity. Once again, Jaime Muela – this time on tenor saxophone – drives up the heat and Rubén Salvador keeps the fire alive with his trumpet.

“La Brisa” and the title track “Mediterraciones” co-exist and twist the music from a light fluttering of “La Brisa” to a deeper more moody “Mediterraciones”. In the former track Marta Sanchez plays off Juan Ramos Callejas’ mighty wail on his alto saxophone. The title tune features Miguel Blanco’s ability to write for dense harmonies. This is a sinister tune, capturing the historic elements of Mediterranean art history, accented by Pérez on congas. Carlos Rossi on flugelhorn shines in the middle eight. “Te Llamé y No Estabas” is another beguiling title and is a perfect bookend for “Desarraigo”. It unfolds in rapid silky movements accented by the handclap, cajón and other percussion that melds into the brass and woodwinds to create the openings for soloists – Sánchez on keyboards, Ramón Callejas on soprano saxophone and Inaki Araquistain on tenor saxophone.

This is a quintessential record that is bursting not only with energy, but also with the ingenuity of melding Spanish song with modern American music. Miguel Blanco, the mastermind behind the Afrodisian Orchestra, excels as he creates arrangements for his own charts in masterful fashion. The leader has an innate feel for musical instruments and expresses his voice with candor and classic audacity. In doing so he has produced a record that will rank with those path-breaking ones made by Chano Domínguez.