That this book Carlos Santana – Sound of the Heart, Song of the World by Gary Golio is a children’s book should come as no surprise; after all the brevity of its text and the exquisitely-styled illustrations by Rudy Gutiérrez are both a dead giveaway. What is a happy coincidence, and infinitely more important, is the fact that such a book has not only been written, but that its author Mr Golio has written a whole series of books about important contemporary musicians – and they are all meant for younger readers.

The books include ones about Jimi Hendrix, Bob Dylan (and Woody Guthrie), Charlie Parker and Dizzy Gillespie, John Coltrane, Charlie Parker and – perhaps most significantly – one about Billie Holiday entitled Strange Fruit: Billie Holiday and the Power of a Protest Song, a book about the treatment of African-Americans by Americans that takes its inspiration from the iconic song that Miss Holiday sang, called “Strange Fruit”, which was a metaphor for the bodies of lynched Blacks in the South of the US that hung from trees. All these books are about important personalities and events in US history, that are almost certainly not part of a regular history curriculum in primary and secondary school systems.

Books that teach children are not unusual, but books about musicians that could be used to teach young readers about altruism and other good human traits – as well as about the evils of the past – are as rare (and rarely read) as the fables of Aesop. And they are badly needed today, as we human beings seem to be in danger of being consumed by hatred instead of love. Mr Golio’s books are therefore quite timely and ought to be more widely read. So if one has not had a chance to read one by Mr Golio, this book on Carlos Santana is a good place to start.

Carlos Santana – Sound of the Heart, Song of the World

Carlos Santana – Sound of the Heart, Song of the World is coffee-table size, but slim, with the story served up in small bite-sized bits, as a good children’s book should be, in order to engage the young reader and keep his or her attention and interest peeked – in this instance on the subject of “growing up Carlos Santana”. The story describes the hardship which the young Carlos experienced. It also tells us of a boy who was unafraid to dream big, and who focused on his dream against great odds, including absences from his father, his hero, for long periods of time, until he was able not only to be reunited with his family, but live his dream and then some. It also tells the story of the boy’s love for his parents despite not always understanding why he had to do certain things to please his parents, something children sometimes tend to forget.

The story ends with the young Carlos still in Mexico caressing exultantly his first guitar, one he received from his father who was, by then, in the USA. Mr Golio wraps things up with young Carlos who is about to make good on the early promise he showed, as he grows up to be the pride and joy of his parents. A short biography of Mr Santana as we know him today follows and this also makes mention of an important aspect of his life, which is the Milagro Foundation, through which the celebrated Carlos Santana we now know today gives back to the world he once inhabited through the many children’s projects his foundation funds not only in the Mexico of his birth, but all over the world.

Mr Golio’s prose is simple, yet stylish and his ability to “speak” to child and “the child” in all of us has enabled him to write a book that has appeal for adults as well – appeal, that is, which ought to make the adult want to pick up his book and gift it to a child. It is an extremely attractive book and the story also has many teaching moments, which is no doubt what Mr Golio intends his books to be. The illustrations by Mr Gutiérrez are also superb and the quality of the printing does both justice. One only wishes for a more reasonable price to foster more widespread reading. But then, this could also become a reality if public municipalities buy and put the book on public library bookshelves. Moreover, considering the fact that much money will almost always be spent on toys that go out of fashion in a relatively short span of time, this book already recommends itself more readily as a gift that will endure. 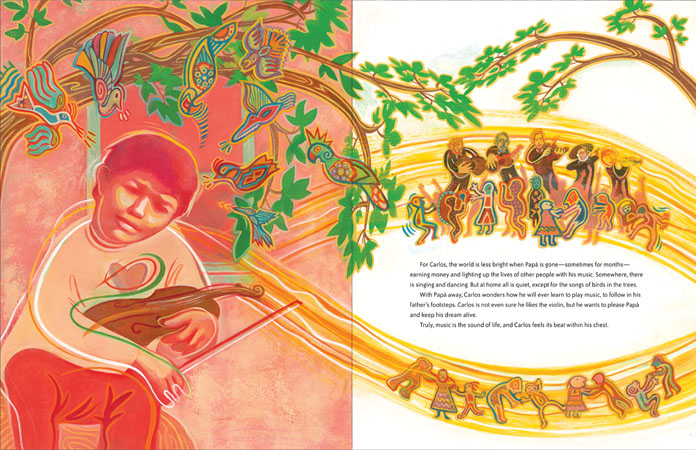