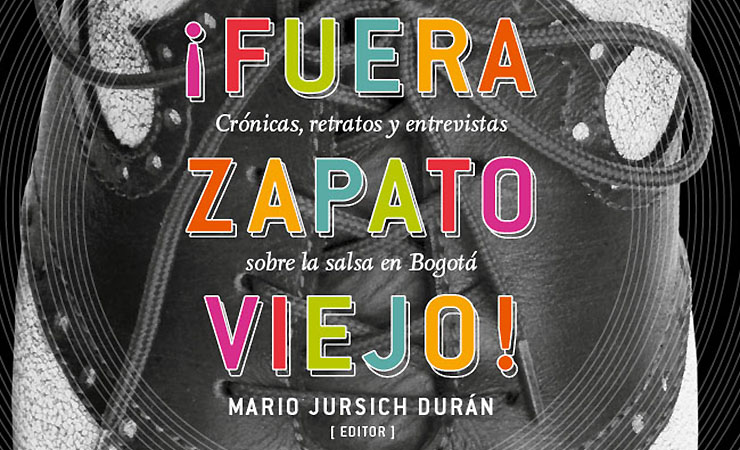 Chronicles, Portraits and Interviews about Salsa Music in Bogotá –

Many people, including some music lovers, assume that the city of Cali and the Caribbean and Pacific coasts were the places where Colombian salsa music composers and singers created their work, but this book shows us the other story about how the salsa music phenomenon took place in Colombia. Forty years ago, Bogota was the place that hosted some musicians who would become the most prominent Colombian salsa music stars. Their wish to show their talent and commitment to music in the capital was the motivating force that drove them, despite the hard times and sacrifice experienced in the “cold” and big Bogotá. 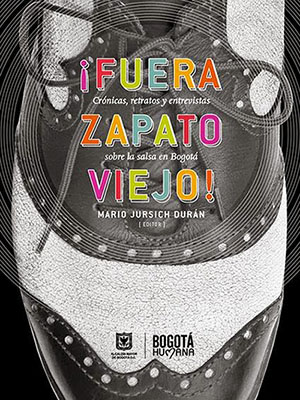 ¡Fuera zapato viejo! is a selection of chronicles and interviews with Colombian musicians, composers, dancers, writers, journalists, collectors and music lovers who have made salsa music their passion. Coordinated by the prestigious editor Mario Jursich, this book shares an exciting and profound part of the history of talented Colombian musicians that one day decided to try their luck at composing and playing “salsa” in Bogotá.

If I take the risk of translating the suggestive title of this book I would say: “Off with the Old Shoe”. Indeed ¡Fuera zapato viejo! was a statement shouted out by the Puerto Rican salsa legend Ismael Rivera when he sang. This is the perfect expression to speak out and purify body and soul when the listener is dancing. The chosen title could not be better because it is a beautiful word game that expresses, in a metaphorical way, the changes produced in people´s life when salsa started to be played in Bogotá.

It was the fifties when two incredible orchestras (Lucho Bermúdez and Pacho Galán´s) had come to the capital to awaken the interests of the classic people of Bogotá. These shows were the first seeds sown in the heart of capital city inhabitants who wanted to know more about the syncopated culture coming from the coast.

It was only until the seventies when composers and musicians settled in Bogotá and started to make the city more enjoyable, by playing in several clubs. The boom of Colombian salsa musicians had started. This boom was the water for those seeds sown before and the seventies was the perfect scenario for a marvelous flowering of creativity around drums, piano, trumpets, bass guitar and maracas. ¡Fuera zapato viejo! means a change, an awakening, it means a shake-off of the inhabitants who learned, through music, about a different culture in the same country; the Caribbean and Pacific culture. The Caribbean and Pacific music gave the people of Bogotá a new perspective on life, a different way to interact with others, a reason to change certain habits and enjoy life in another way. ¡Fuera zapato viejo! is a poetic way to think about leaving some things behind and being open to enjoying different cultural exchanges.

For many years, the typical dance of the society of the Colombian capital was the “rumba criolla”, a slow dance based on the European contradance, which implies no physical contact between couples. When musicians played music from the coast, the imagination of the people in Bogotá began to change and the rules of partying gradually shifted. Their hearts were touched by the sounds coming from the beaches and emotion and rhythm moved faster through their veins. The encounter with the syncopated music opened their minds and they began to understand that they could express and share the most profound feelings through dance.

For those lovers of music history, this book is a gem, a tremendous publishing project produced by IDARTES (District Institute for Arts), Instituto Distrital de Patrimonio Cultural (District Institute for Cultural Heritage) and Malpensante Magazine. This compilation has chronicles about musicians and composers, features about music lovers who contribute to Colombian salsa music, articles about legendary clubs and rumba places, detailed reviews about the salsa festivals and more than 400 photos (many of them unpublished).

The book itself is very well planned; it is comprised of five sections accompanied by valuable and impeccable pictures recovered or collected by different photographers, journalists, writers and collectors. The first section is called “Una orquesta imaginaria” (An Imaginary Orchestra) which tells the story of eleven musical projects including Aristarco Perea Copete (better known as Arista), Washington Cabezas, Joe Madrid, Jairo Varela, and Bertha Quintero´s among others. Gente pa´gozar (People to Enjoy) is the name of the second section of this huge publication: a compilation of twelve chronicles and interviews with people who contribute to keep salsa music alive including Senet Mosquera, Hernando Tovar (founders of salsa clubs), Cesar Pagano, Antonio Morales (journalists), Jesús María Solarte, Luis Cardona (dancing legends), Roberto Rubiano, José Arteaga (writers) just to mention a few. The third section is dedicated to the fascinating story of Colombian collectors of salsa like Alfonso Martínez, Andrés Solano and Hernando Gómez. The fourth part of ¡Fuera zapato viejo! is a splendid and delightful summary about the most important salsa festival in Colombia, Salsa al Parque Festival, which takes place in Bogotá every year. This year is the sixteenth anniversary of this cultural celebration that unites a rich musical diversity of musicians, dancers, collectors, writers, and music lovers.

As with most modern albums, the coordinators of this book could not leave the reader without a “Bonus track”, the name of the last section. This is the original script written by José Arteaga for a radio show in 1980 when the legendary orchestra Fania visited Colombia for the first time.

When you, as a passionate listener, embark on this fascinating journey, you will not have to flip through many pages before you say “Off with the Old Shoe”.

Previous articleBrasstronomical: The Latin Connection
Next articleBrian Lynch And Spheres of Influence At Minton’s