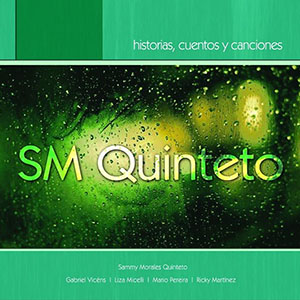 Sammy Morales has been for years, one of the most respected musicians in the Puerto Rico music scene, and a bassist with vast experience playing with some of the most recognized pop artists in the island. Morales waited a long time for the release of Historias, Cuentos y Canciones, his debut album, and the waiting was worthwhile. All the outstanding compositions on this release are originals by Sammy Morales, and each one reflects the diversity of influences in his music.

The waltz fused with South America Chacarera in “Vals para Gaby” is the first track in a voyage of provocative melodies and ingenious arrangements. The chacarera rythmh can also be heard in “Canto al Sur”. Morales also waited to have the right kind of musicians for his album, a group of talented young artists, Liza Micelli on Piano, Gabriel Vicéns on guitar, Ricky Martínez on accordion and flute, and Mario Pereira on drums. This group has the ability to speak to one another with ease and create a unique sound.

Gabriel Vicéns adds his lyrical soloing and tonal beauty to “Las Preguntas”, a smooth jazz piece, reminiscent at times of the music of Pat Metheny. Morales demonstrate his technical ability on bass and Micelli shows a strong command of the jazz language in her improvisations on this track and on the jazzier piece of the album “Desamor”.

The accordion on the cinematic “Soledad Imperfecta” and the haunting composition “Pequeño Pintor”, gives the tracks a distinctive European sound. Micelli plays some soulful and bluesy solos on “Pequeño Pintor”, adding to the nostalgic feel of the piece.

The energy increase on “Rumbita”, a composition with touches of rumba flamenca. Vicéns and Martínez harmonized melodies gives way to a richly inventive bass solo by Sammy Morales. Micelli, a Boston native, shows her command of the Latin language, playing some intense harmonic and rhythmic lines and solos.

Morales’ distinct, sharp bass sound carries the melodies in “El Reposo”, a piece with influences of smooth jazz and funk, with similarities to the music of Bob James. Morales always display a sixth sense for timing, rhythm and harmonic structure that creates a balance in his playing. Already known as one of the best bassist in Puerto Rico, with the storytelling compositions of Historias, Cuentos y Canciones Morales reveals himself as an accomplished composer and arranger.