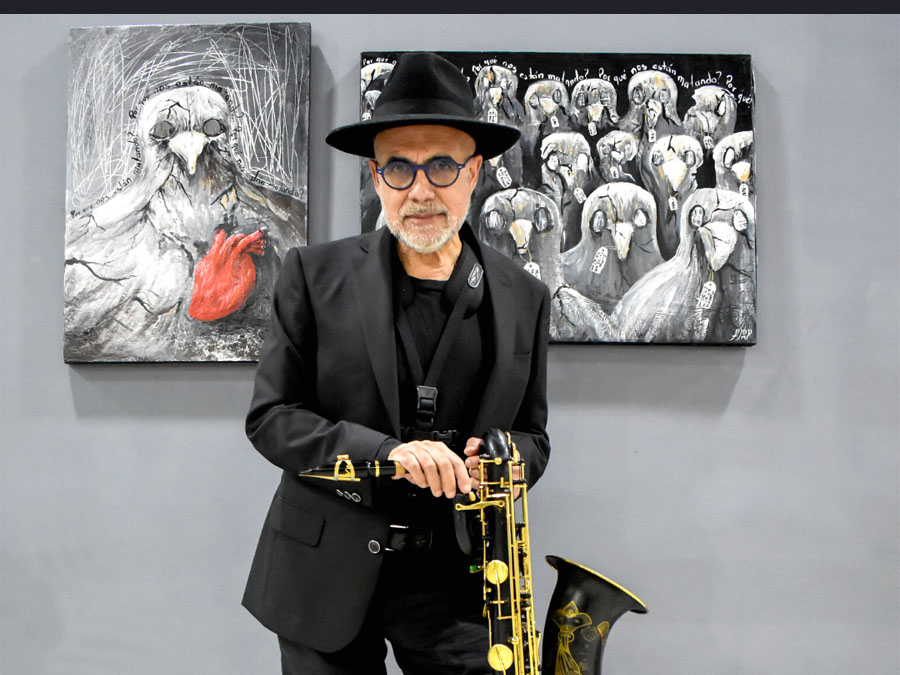 The Santiago, Chile-born Raúl Gutiérrez has been a frequent traveller to Havana, where he’s been imbued with both the rhythms and the spirit of Cuba’s glorious music. Paying it forward, Mr Gutiérrez has made it his mission to keep the flame of Afro-Cuban music – particularly son, danzón and, in one of the recordings under review below, paying homage to the irresistible mambo rhythms of Pérez Prado – with a modern version of the classic Cuban “orquesta típica”, which would be his Cuban Band and – in an extended form – Sus Estrellas Cubanas.

With the former ensemble Mr Gutiérrez pays homage to the legendary pianist and bandleader Dámaso Pérez Prado. The other recording casts a wider net to encompass music that was inspired by Afro-Cuban rhythms and harmonic conceptions, but that was also influenced – and included – the popular music of the halcyon days of swing. In fact, it is safe to say that this recording, entitled Son Elegante brings back to life some classic charts by Cuban masters such as Frank Emilio Flynn, Chano Pozo and the celebrated Mario Bauzá, [together with Grace Samson and Bobby Woodlen] who created the classic “Mambo Inn” which became nearly as iconic as Chano Pozo’s “Manteca”.

Mr Gutiérrez, far from being a relative outsider because he has resided for so long in Europe, is completely re-subsumed [if you like], back into by the Afro-Cuban and Caribbean/Latin Diaspora that bore him in the first place. A superb saxophonist, arranger and bandleader, Mr Gutiérrez fires up the well-oiled machine that is his “orquesta típica” on these two recordings, with which he takes us back to a time when the hypnotic rhythms of son, danzón and mambo made men and women mad with eloquent desire, the kind that was celebrated in both stately ballrooms as well as smaller more tightly-packed clubs. Together these two recordings are an enchanting rhapsody to the vivid and seductive music of Cuba.

If ever there was a “King of Mambo” that regal title suited the one who wore the crown without peer – Dámaso Pérez Prado. The pianist and arranger rose to eminence in the 1940’s with the band, Sonora Matancera, before being launched into the stratosphere of the ever-popular dance-craze – “mambo” – in 1949. That was when Pérez Prado left for Mexico and founded his own orchestra.

Dámaso Pérez Prado is best-known for the chart “Mambo No 5”, which is the apogee of this disc by Mr Gutiérrez. The disc also features other Pérez Prado smash-hits. However, the inspired repertoire apart, what Mr Gutiérrez has succeeded in doing here is igniting the flame of mambo in the ballroom of the listener’s mind’s mind. With brisk changes and a band that waxes eloquently on each of the tracks Mr Gutiérrez brings immense integrity and authority to this famous music. The soloists – especially the great trombonist Antonio Leal and the powerful battery of percussionists – are excellent without being over-assertive. The authority with which these musicians interpret the charts of Pérez Prado is unimpeachable, as is their performances on each and every song from beginning to end.

The complex rhythms of every patron saint of Cuba become the heartbeat of the music of this album, as the musicians add diaphanous Latin layers on top of the sophisticated harmonies. Together melodies and harmonies are glued by the congas, bàtá, bongos and shékere, adding a physical and emotional intensity to this music – through which runs the deep roots of rumba, blended and made new with the cross-rhythms of clave and the loud and vivid sound of horns. Although he may not have stated it overtly here, Mr Gutiérrez doffs the proverbial hat to the great men of son and danzón, such as Ignacio Piñeiro and certainly Bebo Valdés, as well as [more overtly] modern giants such as Frank Emilio Flynn.

The long, lyrical melodic lines are often sung; and when no vocalist is in attendance then the horns take over and duel mightily with the muttering drums and vivid percussion. Among the classic Afro-Latin-Jazz classics is Frank Emilio Flynn’s “Gandinga, Mondongo y Sandunga”, Chano Pozo and Dizzy Gillespie’s monumental “Manteca” and, of course, the wildfire of Mario Bauza’s “Mambo Inn”. Mr Gutiérrez is justified in adding a tribute to Maynard Ferguson – “Trombology” features the celebrated Antonio Leal, who is still a force to reckon with in Cuban music although he has since passed the flaming torch to younger Cuban men such as Eduardo Sandoval.

This is a wonderful romp through classic Cuban popular music, brilliantly expressed by musicians – led by the ever-elegant Mr Gutiérrez and also featuring such legends as Tata Güines, Adolfo “Peruchín” Argudín and others – all of whom fuse sensual rhythms with exciting melodies, often with witty lyrics; all with a wonderful caressing mellowness.