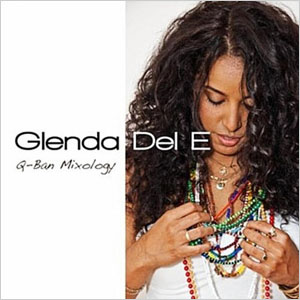 If Glenda del E succeeds in doing what she has set out to do with Q-Ban Mixology, she will be one of the few Cuban artists, who include the majestic Gloria Estefan, to meld disparate musical idioms with traditional Cuban ones in a popular metaphor. There is no name for this kind of music. The word “popular” has become so tainted because there is a good deal of over-produced music is thrust upon the listener and aficionado that real talent often passes like a ship in the night. But hearing rap and hip-hop sit comfortably in her music is an assurance that something new is being sought in the manner of attempting to push the envelope a little bit further. Of course Del E is not the kind of street poet that Telmary Diaz is. Still the attempt to bring various lyric styles into play in her repertoire makes Del E something of a daring artist.

However, it is safe to say that Glenda del E’s greatest strength is her pianism. On the instrumental tracks, “Grandfather’s Danzon,” she gives a fine account of herself, showing that she can create and excel at complex harmony as well as play interesting counterpoint to the suave trumpet of Mario del Monte Sr. And when she combines this with her powerful voice the effect is quite extraordinary. Earlier, on “Mazacote” Del E is sharp. Her grasp of melody is assured and she has an instinct for tumbao. This necessitates a strong left hand and if anything the pianist is extraordinarily gifted in this regard. The concrete musical imagery of this chart is spectacular and Del E weaves interesting rhythmic patterns with the melodic content. The abrupt and complex rhythmic shifts also show her sound grasp of traditional Afro-Cuban polyrhythm. Later, the dazzling pirouettes she makes with her right hand on the brisk melody of “New Habana” are matched by the growling rhythm of her left hand as she makes it swagger with a kind of spirited intoxication. And although it is Glenda del E who makes much of this happen on her own, her rhythmic cohort of percussionists add a piquant flavour to the musical mix.

Glenda del E’s melding of piano or rather instrumental and lyric also reaches surprising highs on this album. Her experiments with various lyric styles on “Fit In… Not!” are self-assured and the passionate rendering of her tour de force, “Q-Ban R & B” leaves an echo of a lasting impression of her soaring voice. Del E can modulate her voice with the demands of the song and this is something she does with verve on her prayer to the Orishas, “Obbatala” as well as on “La Fiesta Cubana”. On the former, she shows off her spirituality with a moving, drone-like splendour. On the latter she is equally spiritual, but this is blended with a free-spirited exultation. Del E’s warmth and passion as a vocalist is also memorably showcased on “L.U.P”.

As a songwriter, clearly Glenda del E has something to show. She is inventive and has a flair for both melody and rhythm. Her work is adventurous—even daring—and she does not seem to back away from complex structures. The fact that Del E is able to write for small and large ensembles is also an extraordinary angle to her talent. This is rare among young artists and must surely auger well for Glenda del E’s future. Right now if she is agonizing over whether to produce another album showcasing her pianism and vocalastics or one where she focuses on merely on her keyboard skills this would be understandable. Not many young artists have such an embarrassment of riches to offer.

Glenda del E is a multifaceted Afro Latin Soul artist from Cuba, who is passionate about being able to influence, inspire, motivate and collaborate the world with her music. Open to a variety of musical influences, from Classical piano repertoire and Cuban folklore, to Hip-Hop, R&B and Jazz, del E has managed to establish herself as an extremely talented versatile musician amongst diverse music circles in Havana, Miami, Toronto and currently in NYC. Read more…