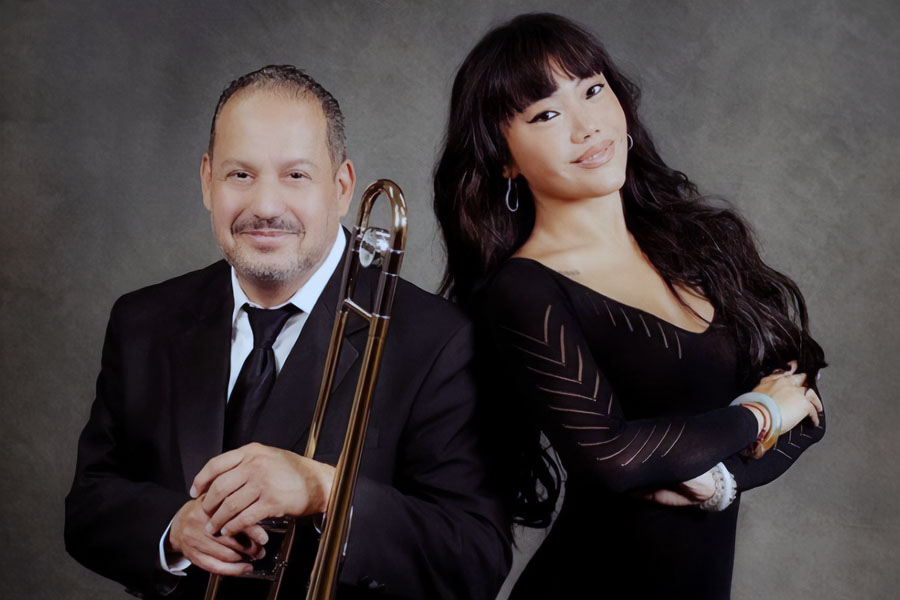 If Brasilian music has spread – across continents – and has been kept alive as far as Japan, thanks to the Choro Club of Japan, it should come as no surprise that a wave of Afro-Caribbean rhythms should also have crashed ashore in Japan [listen to Sayaka], and in Hong Kong. In the Island that throbs with life, and seduced by the hypnotic pulse of Afro-Caribbean music, producer, dancer and artist Gia Fu, forged an alliance in faraway Chicago with the eminent Puerto Rican bandleader and composer Ángel Meléndez.

It turns out that the impresario and the big band leader are not such strange bedfellows after all and to prove it they have combined forces for Ángel Meléndez X Big Band Máquina to produce an album full or impassioned energy. The music is born of a sense of freshness, energy and infectious virtuoso skills that roll over brass, vocalists and percussionists with equal zeal, a warming conviction and swaggering verve.

Afro-Caribbean music arises out of songful melodies echoing and evoking charming narratives, lifted to great heights with burbling harmonies and frenetic rhythms tossed between vocalists, percussionists and instrumentalists who constantly provoke one another into rising to the occasion. The result is high-energy music, the pace and pulse of which never seems to let up unless its musicians are making room for the dangling conversation of a bolero.

These accomplished, strongly communicative musicians do just that throughout the repertoire of this fine album. Youthful ebullience abounds. There is never a dull moment as vocalists – principally vocalists – drive the music into the corners occupied by brass and woodwinds, who propel their harmonic variations into the thundering lines, occupied by the rhythm section – piano, bass and percussion colourists.

The hour-long recital features an all-star crew of musicians, vocalists and pianists, who often step into the limelight every once and a while. There are several heavyweights from the Puerto Rican musical universe [apart from Mr Meléndez, that is] and a new generation of young talent, Richie Bastar on bongos, Jan Duclerc on trumpet, Sammy García on congas, Pedro Pérez on bass; superb vocalists Tito Allen, Hermán Olivera, Rico Walker, Primi Cruz, Willito Otero, brilliant pianists Gilberto “Pulpo” Colón, Jr., Luis Marín, Carlos García, who is also a featured vocalist on track 9, and the ineffably magnificent Juan L. Picorelli.

Love hangs heavily in the air as the vocalists and instrumentalists conjure characters that twirl and leap in an imaginary and interminable salsa-dance that arises out of – and focused on – expressively articulated performances on [to name a few songs] Mi Son, Bailen Mi Guaguancó and Vuelve A Mí. Soloing is eschewed in favour of compelling ensemble performances.

Pianists sometimes enjoy featured outings. But all told this is an album where the spotlight is on the rhythmic edges – which are truly sharp – and the melodic contours of songs – which are buttery and smooth. A highly recommended volume of music between the artistically-illustrated and designed package.

Kudos to Project Director Ralph Riley for his participation in the production team of this project, recorded at Rolo’s Studio [Guaynabo, Puerto Rico], Nino Segarra Studios [Puerto Rico] and Allertone Studio [The Bronx, New York]. This album is offered on both CD and vinyl [high quality] formats.