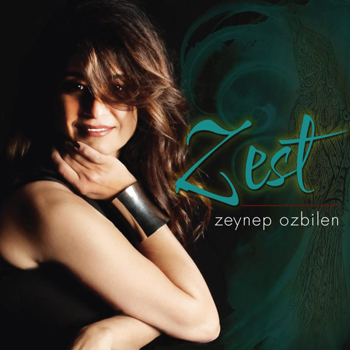 If the idiocy of so-called “cultural appropriation” were to be taken any more seriously than it is right now, would that ever make it possible for Zeynep Ozbilen to make Zest, her second disc after Zee? Moreover, now that she has done so, how would it ever be possible to enjoy it without being stared at, askance, by otherwise intelligent and reasonably educated Canadians and other North Americans? Here are the facts: Ozbilen is principally of Turkish cultural extraction, but now lives in Canada, as a Canadian. And, get this: she sings in Turkish, English and Spanish about Canada, Cuba, and heaven-knows where else. Best of all, she writes and performs (even so-called “standards” in Spanish) often better than very many artists native to those respective cultures, whose cultures she might allegedly be appropriating.

Getting on with it, then… Zeynep Ozbilen is an artist who appears to be born into the art of music. Her contralto fulsome, replete with smoky vibrato and can just as easily be turned up to reach soprano registers, or down to grumble in lower tenors. Ozbilen can sound shy – as she does in “Zeynebim” – pleading – in “Papa Don’t Give Me Away” – beautifully melancholic – as she does in “Silencio” – and irresistibly seductive – on “Yemen Türküsü” and elsewhere… Songs speak to her and Zeynep Ozbilen listens – not just attentively – but with her heart and her heart beats, palpitates and even fibrillates In response, enabling Ozbilen to take songs exactly where they ought to be. It’s no surprise, then, that Zeynep Ozbilen employs a palette that allows her to unfold the world of imagination.

On stage (at the launch of Zest) Ozbilen is a riveting presence and her dramatic enactment of the song narratives allows her to be all of the characters in the songs, sometimes even simultaneously. Some of this might have been lost on record, but isn’t because Ozbilen brings protagonists to life. On Zest she is aided and abetted by a very fine group of musicians that includes the ubiquitous Jeremy Ledbetter, a multi-instrumentalist who also occupies the producer’s chair here and has enlisted support from drummers Marito Marques and Amhed Mitchel, bassists Roberto Riveron and George Koller, pianist David Restivo, flutist Jane Bunnett and the hugely talented trombonist Christopher Butcher and violinist Aleksander Gajic, to name some.

I don’t mean to make Zeynep Ozbilen a poster girl for the opposing side of “cultural appropriation”. But, sadly, all of this might not mean much to the cultural vigilantes, who seem to be upping the proverbial ante of stupidity by petitioning the United Nations to make so-called “cultural appropriation” a crime. But oh, these chaps might say, it’s truth and reconciliation time in Canada… So how about it? Since we’re not talking about plagiarism, but interpretation and expression, shouldn’t we be asking the question: do we really care about what art should and does unfold? There’s never been a better time for soul-searching…