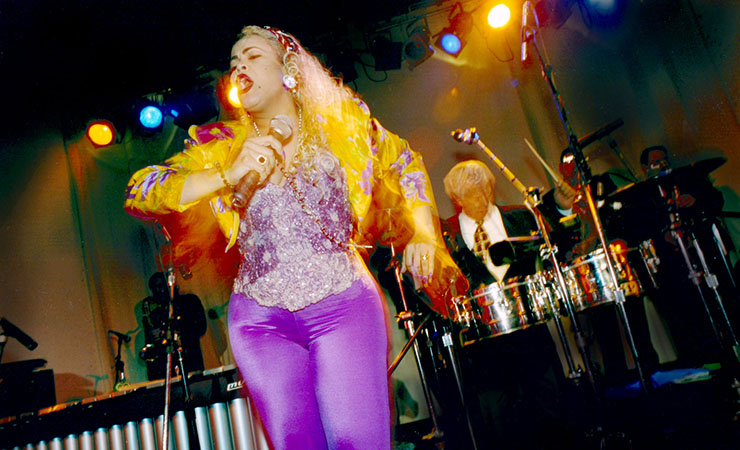 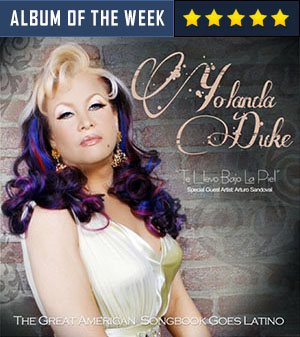 This recording Te Llevo Bajo le Piel brings together the last orchestra of the great Tito Puente waxing eloquent behind one of the El Rey’s favourite divas, Yolanda Duke. The only thing is that Mr. Puente is no longer fronting his band. Does that diminish the excitement of the album? Perhaps, but only very slightly. His spirit continues to charge the orchestra; even haunt it in the nicest possible way. The fact is that Tito Puente left his orchestra in fine shape and it is truly none the worse for wear without him. Better still the glorious voice of Yolanda Duke is there to carry the orchestra as if as on the wings of a dove and pushing it beyond where it might have gone were it not for her powerful and memorable vocals. Ms. Duke has sinewy vocal chords.

Ms. Duke can introduce a song at any pitch. There are times when she enters the lyric in the upper register, beginning her flight as if she were leaping off a far off promontory high up on a hillside. Then she appears to—as if she were a condor—catch a thermal, which is usually her own high C, and soar in the azure beyond. Ms. Duke is simply unafraid of leaping off the proverbial musical ledge and letting her lyric free fall, filled of course, by the powerful warm burst of air from her infinitely expandable lungs. She gets her power, of course from the bottom of her soul where the music and lyrics meet and churn a mighty wheel, mixing them for Ms. Duke to inhabit as if she were the protagonist of each song; as if the song were written for her.

This is not true of the Great American Songbook, the songs of which have been written by some of the finest musical and lyrical minds on the continent. But here is where Yolanda Duke seems to weave a magic spell on the repertoire, making them her own. She sings them with unabashed, almost naked emotion, in her majestic contralto. But every once and a while Ms. Duke takes flight into ranges that she would not normally venture, where she is absolutely and devastatingly beautiful. There is a magnificent example of this in “Nadie Me Lo Podra Quitar (They Can’t Take That Away From Me).” Of course, all of “Luna Azul,” performed as a cha cha cha seems to exist in a rarefied realm. The haunting beauty of “Medley Myrta Silva” is a most spine chilling bolero, especially as Ms. Duke reaches for those high notes as if she were singing an aria.

The crowning glory—or at least one of them—comes in the form of another exquisite bolero, “Contigo En La Distancia” a classic if ever there was one. Here Ms. Duke is at her absolute best as she matches the ingenuity of the ineffable trumpeter Arturo Sandoval. The trumpeter informs the song with a glow that only he can, from a burnished horn that seems to come alive at his touch. Yolanda Duke, for her part matches the trumpeter tone for tone and creates her own palette of colours so that the song floats on a diaphanous tapestry that swathes the rest of the album in colours and tones that continue haunting the listener long after the last notes of the Italian version of “Dio, Como Ti Amo!” die down.

The lights go down, the band strikes the opening notes of the first song and for the next two hours Yolanda Duke mesmerizes the crowd with her mastery of Latin jazz, Merengue, Ballads, Bossanova, Salsa and Bolero. While that is a very real scenario today, it was but a recurring dream for young Yolanda growing up in New York City. She was the gifted little girl with the big voice, who––after taking singing lessons––began to take command of her talent and gain confidence in her ability to entertain.

In her early teens she entered singing contests and eventually won a local competition. Soon after she began her singing career, performing in local clubs in NYC and Toronto. This lead to her being booked as the headliner of a Vegas-style show at the number-one showplace in the Caribbean, La Fuente Nightclub, at the prestigious Hotel Jaragua, where she refined her performing skills and stage presence, beginning her transformation into ‘La Duke.’ She followed the success of that appearance by recording a hit tropical album for RMM/SONY Music. Yolanda then recorded a tribute to the famous Latin songstress La Lupe, who gained international fame performing with the Tito Puente Orchestra. A copy of the cd made its way to Tito, who was so impressed that he invited young Yolanda to appear as a guest vocalist at several concerts over the next few years. Then he made her an offer she couldn’t refuse––becoming a permanent singer in the band from 1994 -97, thrilling audiences all over the world. La Duke had the privilege of sharing stage with the likes of Ray Charles, BB King, Arturo Sandoval, Dianne Reeves and Al Jarreau.

As her fans will attest, what sets Yolanda apart is that she doesn’t just interpret a song, she takes it and makes it her own. Her voice is a wondrous instrument that yells with exuberance, cries with soul and whispers with intimacy. In the course of one song, she can inspire your mind, touch your heart and move your feet like no other singer. Today, Yolanda carries on Tito’s legacy, performing in venues around the world with the Tito Puente Latin Jazz Orchestra. She continues her prolific recording career as well, recently producing a new Big Band recording of standards. The little songbird might be all grown up, but deep inside she is still a young girl singing her heart out for all the world to hear.

AfroMantra: This Side of Mestizaje