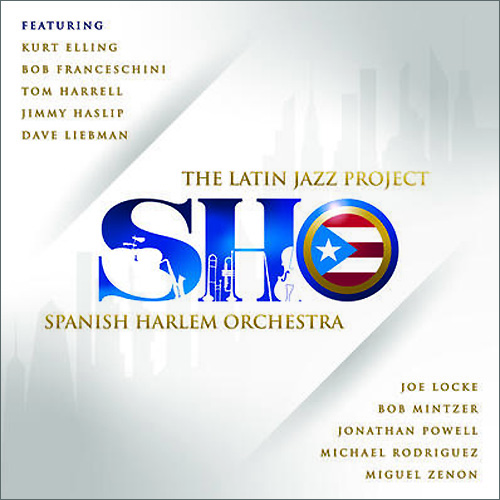 In the nearly two decades of its existence, the Spanish Harlem Orchestra has come to be regarded as one of the most important contemporary Latin music ensembles in existence today. There is a very good reason for this and it does not only have to do with being recognised by three Grammy Awards [although that helps]. The Orchestra – fronted by the inimitable composer, arranger and pianist Oscar Hernández – is a potent musical force, generating near-atomic energy when it performs – in the studio and on stage. However its seventh album, The Latin Jazz Project, comes with a slight twist and the epic story of seemingly a lifetime in performing music across the globe, teaming up with a galaxy of superstars every so often.

And so, even as the Orchestra has been creating and performing music in this style for years, Mr Hernández decided to script a special story with The Latin  Jazz Project, co-produced by long-term cohort: trombonist, arranger and composer, Doug Beavers. In essence what this recording does is to honour the stream of Jazz music and its icons, both of which have been a constant source and a rippling pool of musical inspiration and energy that has fed and grown the ensemble ever since it broke through from its home in New York City, traversing the world to spread the message of what is referred to as “Latin-Jazz”.

Moreover what sets this recording apart from every other recording that the Orchestra has recorded before is that each of the eleven songs honours the two streams of music – Jazz and Latin – and features  impressive guest-soloists such as the great saxophonists Dave Liebman, Bob Mintzer, Miguel Zenón and Bob Franceschini, trumpeter Tom Harrell, a genius on his instrument, if ever there was one, as well as the young lions, Michael Rodríguez and Jonathan Powell; vocalist Kurt Elling and vibraphone wizard Joe Locke. It’s hard to come up with just one song to highlight as something that is typical of this album’s excellence because every song – with each guest soloist – is of an extraordinarily high quality in terms of the arrangement, the playing – both solo and in ensemble – and ultimately the effect all of this glorious music has on the mind’s ear and on the heart, where this music is most deeply felt.

The musicians of the Spanish Harlem Orchestra are on the top of their game throughout and they negotiate these breathtaking charts  with plenty of intuitive cohesion. Despite its size and the fact that soli abound, the ensemble operates as a partnership of equals with each member of the group exploiting his technique, expression and feeling – which, in turn, brings deeply interiorised readings to all the material. The compositions themselves supply the Spanish Harlem Orchestra and its guests with a cornucopia of dancing melodies, insistent and energetic rhythms, and edifying harmonic concepts. Naturally the makes for many memorable moments woven into a diaphanous sonic fabric made up of the most spectacular musical texture. The guest soloists play with sublime, idiomatic brilliance, making each one of these eleven tunes music to die for.