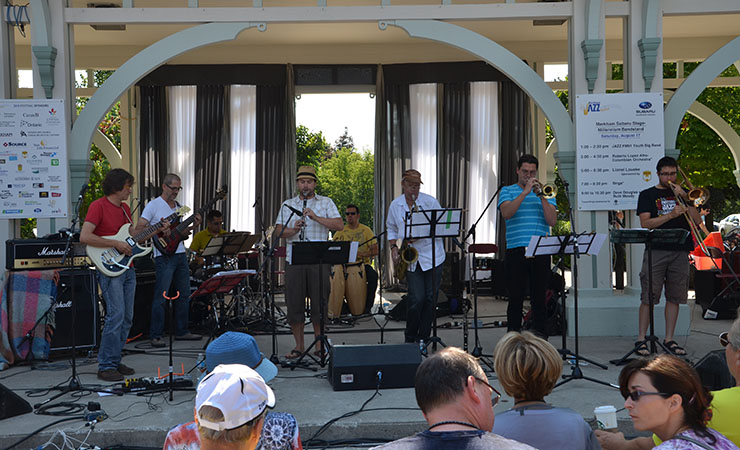 Montréal has been called “Canada’s Cultural Capital”, and rightfully so. A fertile terrain for musical talent from all over the world, the second largest Canadian city is home to Roberto López since 1994, when he arrived to pursue jazz studies at Concordia University.

A composer, arranger, producer and multi-instrumentalist from Colombia, Roberto López has become an important member of the vibrant Montreal’s multicultural musical family. In 2005, he formed the Roberto López Project with musicians from all over the American continent. This is an experimental group where every member brings to the table a diversity of cultural backgrounds and a whole array of musical influences. They released their first album, Que Pasa? in 2006, followed by Soy Panamericano in 2009.

In 2011, a new project is born, making a fresh cultural statement with Roberto’s fine arrangements and compositions. His take on popular, folkloric Colombian music of African/native roots is at the same time hip, modern, and respectful of the tradition. Finding points of connection between the music of traditional wind ensembles from the Caribbean coast of Colombia and North-American Jazz Big Bands and melding both in a fluid, seamless manner, took Mr. López many years of dedicated study and research. The final result, recorded on the album entitled Azul (2012 Curura Musique) is outstanding, presenting five of Roberto’s own compositions and five arrangements of popular songs penned by well-known Colombian composers. With Azul, the Roberto López Afro-Colombian Jazz Orchestra is gaining new fans within Canada, US and abroad. Roberto’s name now belongs to a list of respected practitioners and creators of Afro-Colombian jazz. Among them: Francisco Zumaqué, Justo Almario, Antonio Arnedo, Lucía Pulido, Pablo Mayor, Hamlet Fiorilli.

An Educational Journey Through Music

Azul takes us on an educational journey throughout the Colombian musical territory. Certainly Cumbia and Porro are two of the best-known musical products that the South American country has given to the world, but the richness and diversity of Afro-Colombian rhythms is incredibly vast. Along Cumbia and Porro, get ready to dig Fandango, Paseo, Champeta, Chandé and Mapalé. Those different rhythms are intrinsically associated with a specific region of the country. For example, Porro is identified with the departments of Córdoba, Sucre and Bolívar, and Cumbia with the municipality and town of El Banco, which is part of the department of Magdalena. The songs on Azul are presented in a grand manner, seamlessly fusioned with jazz elements. The music is at the same time elegant and funky, very danceable, with a Dixieland music kind of feel. So, get ready to jump from the Caribbean coast of Colombia to New Orleans, to the northernmost part of America and back.

“Bocas de Cenizas” is a very uplifting tune, a combination of Chandé and Porro, “Blue Vallenato” is a more relaxed Paseo, “La Chiva” and “En Mi Corazón” are heated Porros and “San Pelayo” a combination of Champeta and Mapalé, all of them original compositions penned by Roberto López.

“Fiesta de Negritos”, “Plinio Guzmán” and Carmen de Bolívar are traditional Porros written by Luis Eduardo “Lucho” Bermúdez, a prolific composer who according to Mr. López “was at the same time the Colombian Benny Goodman and Duke Ellington”, and responsible for internationalizing folk rhythms and popularizing Cumbia and Porro throughout the continent”. A very interesting point stressed by Mr. López is that Porro, just like in Jazz, contains improvisation sections. “El Pescador” is a beautiful Cumbia composed by José Benito Barros and transformed into a sensuous tune with an almost hypnotic cadencious feel. “Tres Clarinetes” is a lively Fandango (performed with three clarinets). Truly a fitting tribute to its composer, Pablo Flórez.

The Orchestra. The Musicians

Besides composing, arranging and directing the orchestra, Roberto López is a talented multi-instrumentalist who plays ukulele, tiple (a plucked twelve-string guitar typical of Colombia), acoustic and electric guitars and percussion: maracas, llamador, caja vallenata, guacharaca, tambora. His guitar licks are funky, and his accompaniment imprints the music with a modern touch. Helping Mr. López to accomplish his vision there’s a solid rhythm section integrated by Fraser Hollins (bass), Massimo Sansalone (drums, campanas, tambora) and Kullak Viger-Rojas (congas, alegre, tambora). Plus a non-pareil smoking horns section integrated by Jean-Sébastien Leblanc (clarinet), Joel Miller (tenor sax, clarinet), David Carbonneau (trumpet) and David Grott (trombone). They certainly prove that Canadians make some of the best horn players on this planet. I had the opportunity of experiencing this terrific orchestra live in concert during the Markham Jazz Festival 2013. If you have a chance to see it make sure you don’t miss it.