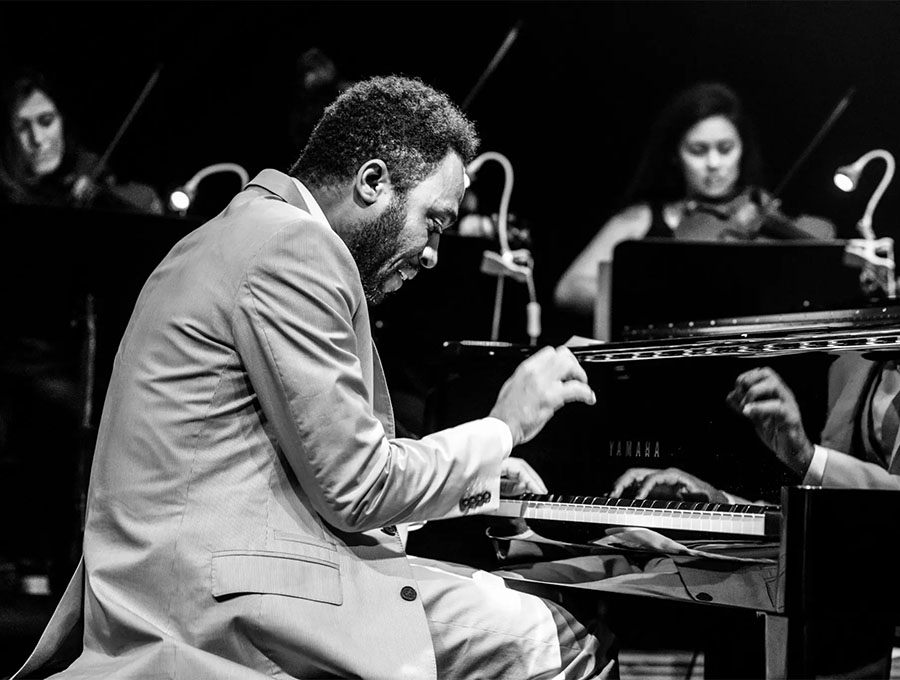 Very rarely indeed does one get to call an album of music “a masterpiece” and actually mean it. But this is absolutely true of The Grand Concourse by the pianist, composer, arranger and producer Dayramir González. There is not a note that is out of place, not a phrase that does not bring a rush of blood to the cheeks – not from any one of the scores of musicians who have helped make the music what it is. The photography is sensitive and each photograph has been emotionally conceived and executed. Meticulous care has been taken to present each of the twelve songs in their artistic and emotional contexts on individual pages in the booklet, with profound and beautifully-written notes and photographs; a stunning package.

Remarkably this is only the second album by Mr. González. His first album, Habana enTRANCe (Cinquillo, 2007) certainly announced the arrival of another master musician from the fertile musical topography of Cuba, which continues to suggest that it has an almost magical and mystical formula for creating pianists. Although he needed no introduction from older masters such as Chucho Valdés, he got one anyway. However with the explosive start to the album from “Gozando” and the nine other pieces that followed, Mr. González’s music spoke for itself and it seemed that not since Gonzalo Rubalcaba had Cuba produced an artist with such impressive credentials. The Grand Concourse is an enormous development.

From the very (title) The Grand Concourse, an artistic and spiritual portal of sorts, Mr. González beckons us into the deeply spiritual world of Santeria. But the welcome here is unique and it isn’t until “Iyesa Con Miel” with the elemental Lucumi chant by Pedrito Martinez, that one is greeted with something familiar in the way of the Afro-Cuban sprit world. But it is always there, right from the first bars of “Smiling”. It is just that Mr. González has found a new idiom to express what is traditional to him rhythmically. And this is what makes this music so wonderfully unique. This is unlike almost every recent album of Afro-Cuban music, even music by Cuban musicians who visit the same musical ground over and over again, making the evocation of the Lucumi idiom seem laboured.

Mr. González, on the other hand, has invented something wholly new; a sensory experience of epic proportions ensconced in twelve works featuring beautifully crafted arrangements of his own work; a beguiling variety and sensuousness, in every lovingly-crafted phrase of “Moving Forward”, the bittersweet melody of “Blood Brothers” dedicated to his late brother Daymell. Clearly Mr. González’s genius for composition is evocative not only of his tradition, but also for the often-evasive imagery of Jazz. His material focuses on the craftsmanship of the narrative, deeply influenced by his innate spirituality, born of Lucumi worship and this reaches a sublime climax in “Situaciones En 12/8”, rhythmically-sculpted in long, sustained inventions in the West African “bembé” metre.

Mr. González’s musicians include a stellar cast. Yosvany Terry – on alto saxophone and shekere graces several songs as does the fine percussionists and musicians – Pedrito Martinez, Mauricio Herrera, Willy Rodriguez, Paulo Stagnaro, Zack Mullings and many others. Mr. González’s wife and multi-instrumentalist, Tatiana Ferrer can be heard here as well and the elusive, but brilliant reeds and woodwinds player Caris Visentin Liebman also makes a rare appearance on oboe on “Blood Brothers”, which also features the extraordinary String Bembe. Everyone here is completely attuned to Mr. González’s vision and artistry right down to the engineers with enormous ears: Jaclyn Sanchez, Marcos Torres and Willy Torres, and the photographers and exquisite designer, Olivia Solis. This is an album to die for.

Featured photo of Dayramir González provided by the artist.