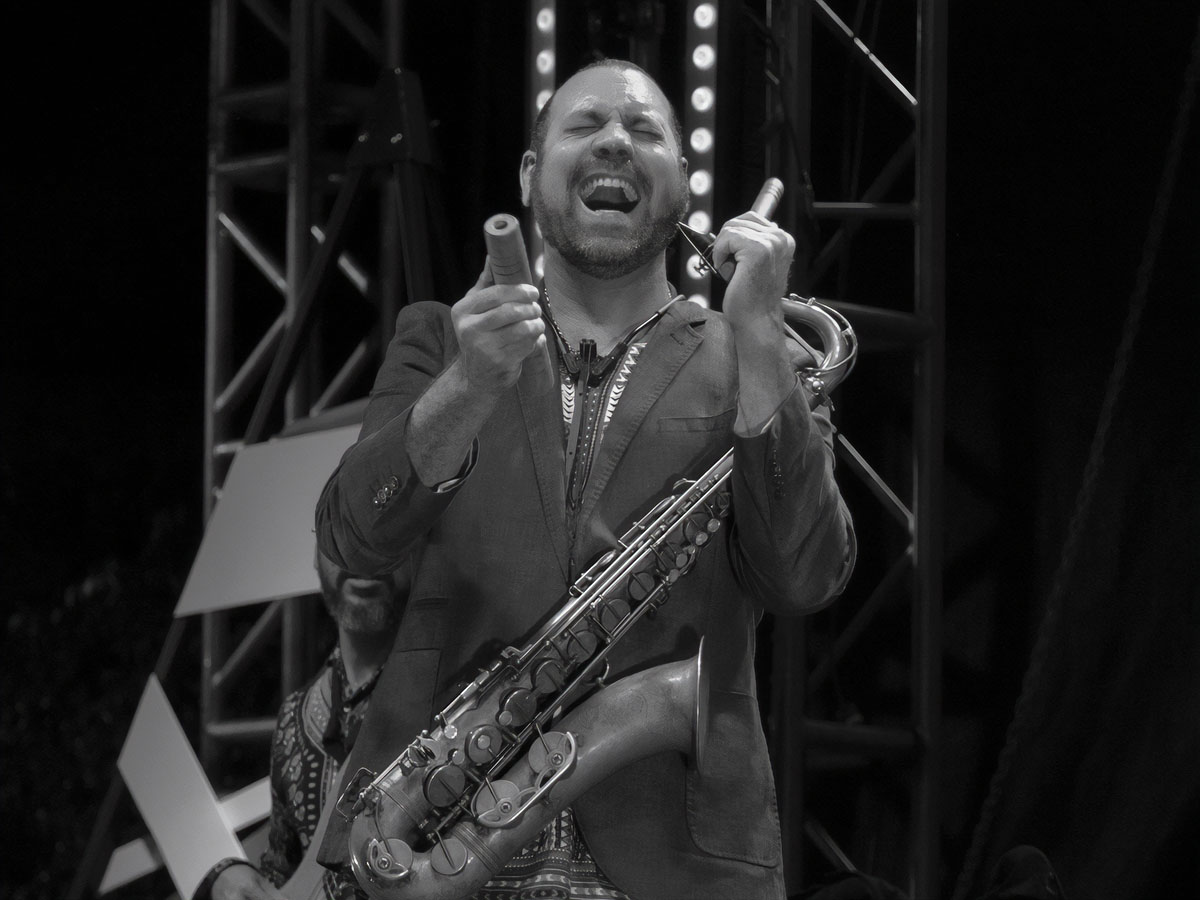 Carlos Averhoff Jr. may certainly be forgiven for having waited to make his best album ever – a most profound dedication to his celebrated musician-saxophone playing-virtuoso-father Carlos Averhoff Sr. In retrospect, leaving the music to mature and percolate in an emotional homage. As it turned out Together is a heartfelt farewell from one Averhoff to the other. We are once more reminded how an idiom deriving essentially from the collision between Black American Music and Afro-Cuban Music, and in this case, transformed – by the musical aristocracy of the Averhoff father-and-son into a heady mix of alternating visceral energy and absolute tenderness, innocence and seduction.

And what better way to celebrate the memory of his father than for Mr Averhoff Jr. to gather together a super constellation of musical stars to join him on his journey? The phenomenal pianist Chucho Valdés, for instance, with who Mr Averhoff Jr. kicks things off [with] a proverbial doffing of the hat in orchestral fashion to Charlie “Bird” Parker: “Sequence”. We are treated here to expressions of the most exhilarating freedom and compelling expressive and mannered playing by the pianist together with another superstar, bassist Nicky Orta who, incidentally, was on the debut album that launched the US career of trumpeter Arturo Sandoval; that super group also featured the bassist’s late, piano virtuoso brother Michael Orta.

The brilliant unorthodoxy of Mr Valdés’ pianistic mastery certainly commands attention here, but so does that of Mr Orta; most certainly the performance of the leader, who plays with superb zest and brio – one magnificent harmonic variation after the other – and sets the tone for wholly imaginative playing by what seems like a wall brass [Juan Munguía] and woodwinds [Mr Averhoff together with Germán Velazco] held together by the pumping energy of drummer Reinier Guerra and conguero Juan “Wickly” Nogueras. But if you think that all of the genius of this music in confined to that opening track, think again…

Mr Averhoff Jr.’s core group consisting of the indomitable pianist Jim Gaisor – who, as it turns out, can play with masterful expression and technical facility [check out “Donna Lee” but more of that song later] – with the thunderous roar of bassist Néstor del Prada and Mr Guerra on drums. All you have to do is dig into “The Magician” and “Together”, both snapshots of this terrific rhythm section that elevates the playing of Mr Averhoff to no end. To be able to hold court with the likes of such masterful guest-musicians as flutists Néstor Torres and Orlando “Maraca” Valle, whose magic may be heard to perfection on “The Magician” and “Oriented Conga” respectively, and the great alto saxophonist César López [“Not for Everybody”] and, of course Mr Velazco and the unbridled mastery of Horacio “El Negro” Hernández, guitarists Richie Zellon  and Ahmed Barroso – is no mean feat either.

Meanwhile two tracks – Sam Rivers’ iconic song “Beatrice” written for his own wife, and “En la Orilla del Mundo” – help make this album one of the most memorable you will ever have listened to – if deep listening is what you do. The former is a great vehicle for Mr Averhoff Jr. The absolute virtuosity [this time around] is expressed in the tenderness of his playing which unfolds in cascading harmonics. This high level of performance is also reflected in the magical and wistful guitar of Mr Zellon. The same is true of the latter. Here, of course, the genius of violinist Federico Britos and the gorgeous articulation, phrasing and rhythmical clarity in the vocals of Maggie Marquéz.

The absolute apogee of this disc is the deep feeling and slow burning intensity of Bird’s “Donna Lee”. The fact that Mr Averhoff also [correctly] assigns this composition to the greatest-ever musician and innovator in Black American Music [and not to Miles Davis] is also worth mentioning. But the most memorable aspect of this song is how the Averhoff’s turn Bird’s masterpiece into one of their [Afro-Cuban] making. Better yet,  the magical interplay between father and son is delightfully reminiscent of the seminal partnership that Bird shared with the great Dizzy Gillespie.

That and the breathtaking playing of Mr Gaisor, Mr Del Prada and Mr Guerra make this a climactic finale to an album which Mr Averhoff Jr. is going to find challenging to match in terms of the burning intensity of his own – and everyone else’s – playing too. However, one suspects that this is not something Mr Averhoff Jr. would be thinking of doing… This is a very special date, one that Mr Averhoff should be justifiably proud of.

Chucho Valdés & Paquito D’Rivera Reunion Sextet: I Missed You Too!