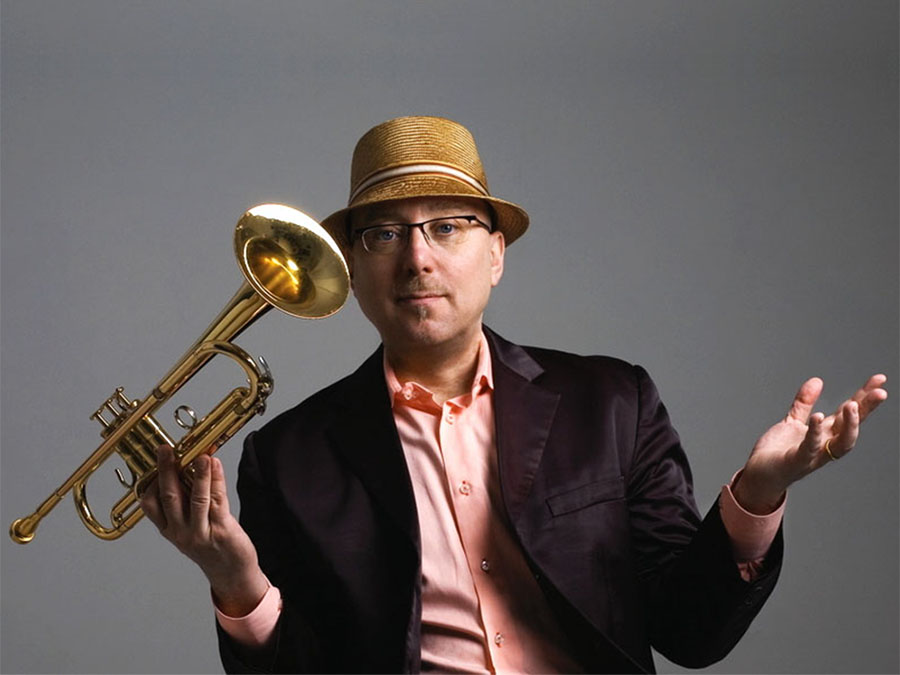 The trumpeter Brian Lynch needs no introduction to aficionados of what is all-too-often referred to Latin Jazz [but which musicians – including Eddie Palmieri, Mr Lynch’s erstwhile employer – often prefer to refer to as Afro-Cuban]. The latter term is also contemporaneously somewhat limiting. The reason is simple: the rhythmic backbeat of the music forms the very ebb and swell of the waters of the Atlantic and the Pacific Oceans, and Caribbean Sea which is – if you like – the New Africa, and this Black Diaspora has defined the very cultural topography of North and South America and the islands around the continent.

There are not two sources of this music, but one and Brain Lynch is one of the best ambassadors of The Source. He wields his horn like a scepter and his breath heats the air that he propels from his expansive lungs to make the kind of bronzed, melodic music that has made him one of the best living proponents of this music.

Musicians hold Mr Lynch in awe as he leads an ensemble such as this one called Spheres of Influence. The name of the ensemble must be read as a double-entendre – a kind of proverbial give-and-take between music and musician – because just as the music has given everything to Mr Lynch he has used the gifts he has received to give back generously as he sculpts a sound with long inventions, moulded from the molten fire of son, danzón, and the slow-burning blue flame of the bolero. This double album Songbook Vol. 2: Dance the Way You Want To – has iterations of eight songs with which Mr Lynch made his mark from right out of the gate when he released his debut album, Peer Pressure [1986].

Notably, Mr Lynch spins out new versions of all of them. The eponymous song, dedicated to another fabulous trumpeter, Tom Harrell, appears three times on both discs – in an alternate take and as an edit for radio play. Throughout this repertoire Mr Lynch inspires his ensemble, Spheres of Influence, to give idiomatic performances of this outstanding music. Disc 2 contains the songs shuffled and often painstakingly edited for radio. The songs that are thus presented [for radio] do not suffer at all from being pared down – usually by just slightly over a minute; they simply sound like new versions of the music.

Mr Lynch also quietly leads the musicians from the front of his proverbial and elegant comparsa. The musicians give back in kind: they are adept at maintaining the flow of the musical narrative, and with it, the music’s emotional flux. This is best observed when the group moves from more spirited music such as danzón and bolero. Mr Lynch is endlessly elastic and flexible, and consistently brilliant; he improvises at will taking the musicians into uncharted territory, daring them to follow. The musicians always return the favour. The more the trumpeter dares them to do harmonically and rhythmically the more they come up with.

Harmonically we hear from saxophonists Tom Kelly, Aldo Salvent and Chris Thompson-Taylor, who mirror Mr Lynch’s brassy outpourings with often torrential harmonics that match him power-for-power. The propulsion comes from two fine pianists – Kemuel Roig and Alex Brown – and is taken to its most commanding level by the bassist Rodner Padilla and percussionists Hilario Bell [on drum set] and Murphy Aucamp on Latin percussion.

These accounts of Mr Lynch’s work will hold you enthralled throughout the two discs with undercurrents and variations in tempo that bring dynamics with endless subtlety to the songs, no matter which way they are played. Songbook Vol. 2: Dance the Way You Want To is a musical thrill with songs that are right on the money on both discs.