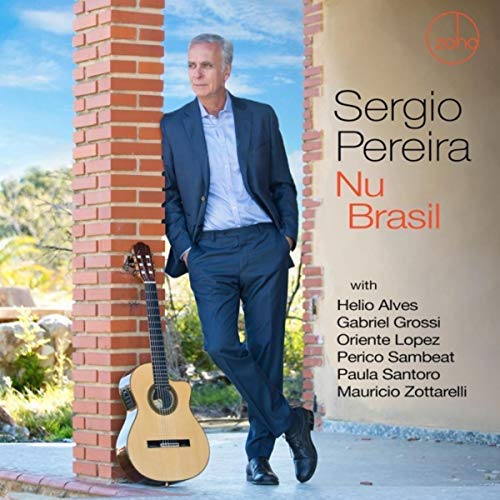 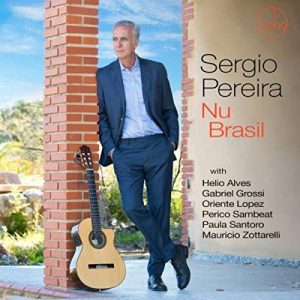 For the carioca, Sergio Pereira, playing on the Portuguese word “Nu” as the title of his album Nu Brasil and then following it up with a wonderful play on strings to make it all come alive must be the easiest thing in the world. After all he is a strings player himself, playing what Brasilians call violão in the grand tradition of the long line of Brasilian guitarists which he not only follows but embellishes enormously. Mr Pereira has also taken a leap into the great unknown, so to speak, with music that has complex orchestrations, thereby mixing the traditions of men like Laurindo Almeida and Baden Powell with those of Heitor Villa-Lobos. A bold move indeed as Mr Pereira has not attempted before. His debut album, Swingando – although it featured a constellation of Brasilian superstars was a small ensemble effort. But this recording is another matter altogether…

Not only has the core group of guitar, piano, bass and drums together with percussion been expanded to include brass, reeds and woodwinds, but the unique feature is the addition of strings on two important – “East River” and “Per Te”. Also as before the voice emerges as a featured instrument and because Mr Pereira has employed an array of artists here he has been able to create an enormous palette of colours and textures. He sets the tone for this with “Down South” on which he sings in his floating style but then springs a surprise with Devin Malloy’s extraordinary rap that not only livens up the proceedings but adds a fabulous dimension to the music that adds a broodingly percussive tumbling groove to the music of this piece.

Elsewhere more surprises and intense harmonic pleasures abound rising to a crescendo on “Nu Brasil” with the gorgeously voice of Viktorija Pilatovic, whose soprano is pure, lithe and high-sprung. Harmonising her lead lines by doubling up on vocals and also with the horn of Voro Garcia is pure magic. The inimitable Paula Santoro appears on “Arpoador” and “Trem do Tempo” and for these two pieces no finer vocalist could have possibly been found. Miss Santoro is breathtaking. Her vocals grace both works floating and weaving with sublime clarity, precision and feeling. The rest of the group accompanies her with exemplary beauty. But it is pianist Baptiste Bailly who is exceptional here as elsewhere as is drummer Mauricio Zottarelli, who obviates the need for complicated percussion, sounding like a whole percussive ensemble with a simple drumset.

Of course neither of these vocalists are alone in taking one’s breath away. The incomparable Sergio Santos on “Greta” does much of the same. And so does the brilliant Helio Alves with his extraordinary pianism on “Sambinha” and “14 Clicks Away”; as do the ingenious harmonica player Gabriel Grossi on “Sambinha” and “Lascia Stare”, and the great Spaniard, Perico Sambeat offers a superlative mellow account of the music of “14 Clicks Away”. But it is Sergio Santos whose energising precision and passionate performances throughout who makes this album altogether special. His breathtaking articulation, and warm intonation adds colouristic brilliance to the music making this album something truly special.