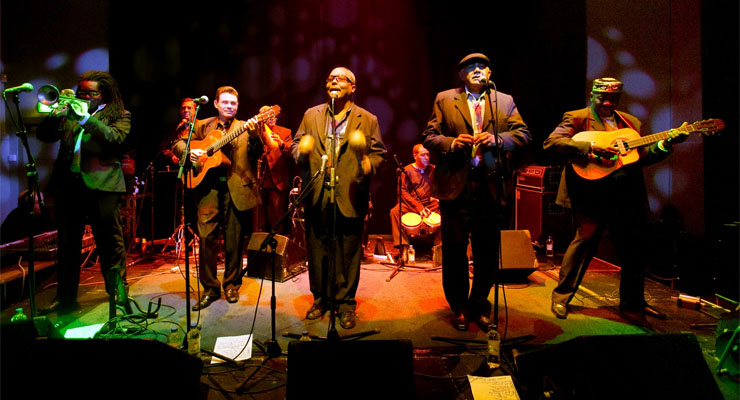 The legendary Cuban ensemble is presented by Small World Music and Okokan Productions on Wednesday, February 5th at Lula Lounge in Toronto. “Sierra Maestra are the guardians of the Cuban son music tradition. Named after the mountain range in the eastern part of the country where the music originated, they have creatively preserved this infectious ancestor of salsa dating back to the 1930s. They have gone on to become its finest performers, playing at clubs and festivals around the world to huge acclaim from listeners and dancers.” See more details of their 2014 Canada Tour.

Starting a new season, Latin Jazz Wednesdays return at Jazz Bistro, in the heart of downtown Toronto. Hosted by Joaquin Hidalgo, Havana to Toronto Safari presents a respected and professional spectacle bringing back some of the tradition of the Cuban music with Latin Jazz. Havana to Toronto Safari is a quintet integrated by Joaquín Núñez Hidalgo on percussion, Hilario Durán on piano, Roberto Occhipinti on bass, Elmer Ferrer on guitar and tres, featuring Horacio “El Negro Hernández on drums.

“After coming out swinging with their debut album in 2011, Toronto-based collective, The Heavyweights Brass Band now packs a one-two punch of crossover appeal and respect from music’s elite with the release of their sophomore album, Brasstronomical.” Released on Lulaworld records, Brasstronomical will be launched at Lula Lounge on Thursday, March 6th, 2014.

The Manhattan Transfer at Koerner Hall

The platinum-selling, worldwide chart topping jazz-pop vocal quartet of old school hipsters remains a staple in both jazz and mainstream music. Manhattan Transfer has been around for 40 years, but it is far more remarkable that those four decades have been marked by near-continuous artistic expansion and advancement. They grace the stage at magnificent Koerner Hall on Saturday, March 8th.