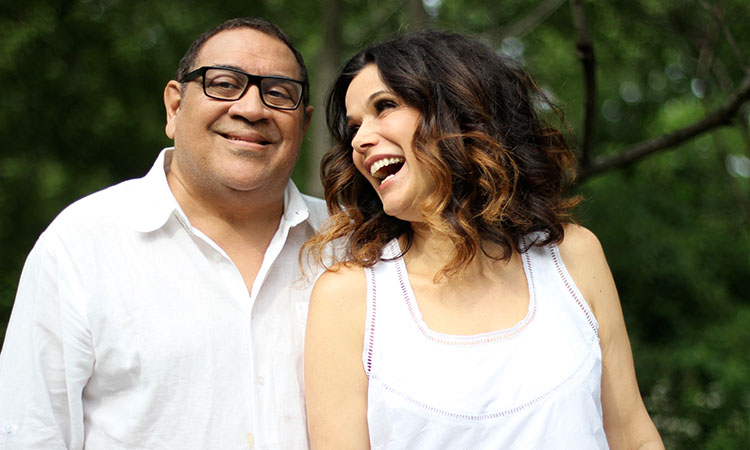 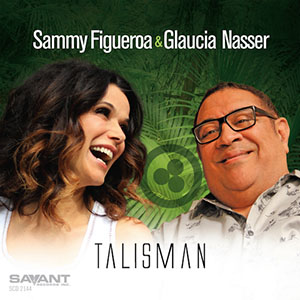 Accidents can happen—and sometimes they bring good things. When Brazilian singer Glaucia Nasser appeared at a concert at WDNA’s Jazz Gallery in Miami, she had no idea that a chance meeting there would change her life. But it was there that the concert’s producer and Cafe Brasil radio host Gene de Souza introduced her to the famed Latin jazz percussionist Sammy Figueroa.

“I was just the opening act,” Nasser recalls, “but I talked to Sammy after the show and told him about my idea for mixing my voice with his style.”

Figueroa has long been known for his inventive and flexible approach to percussion and has played with everyone from Miles Davis to Mariah Carey. He was there as a fan of the main act, Brazilian jazz guitarist Chico Pinheiro, but when he heard Nasser, he was convinced: “Glaucia was charismatic, so original in her approach to music. And she had a gorgeous voice.”

Fast forward to the result of that encounter. Figueroa brought in his long-time producer and partner Rachel Faro, who immediately loved the concept. Together, the three of them created Talisman (Savant Records; release: September 9, 2014), a breathtaking mix of popular song from Nasser’s homeland, which balances her soaring vocals and Figueroa and the band’s bubbling Latin rhythms.

“This is the music of my heart,” Nasser says. “It’s an expression of love. We just let things happen. Some people thought Brazilian and Latin music couldn’t work together, but this proves it’s a beautiful combination.”

After their serendipitous Miami meeting, Nasser pursued her dream, inviting Figueroa to Brazil with his band and producing a concert where Latin jazz could meet Brazilian sounds. When the show finally happened a year later, it was as evocative as everyone hoped. “I sang with his band and he played congas with mine,” Nasser recalls. “Naturally, we knew we had to make an album together.”

In December 2013, Figueroa and Faro joined Nasser in São Paulo where they put together a band of extraordinary musicians and decided which songs to record. They settled into NaCena Studios and began three days of intense rehearsals, followed by three days of even more intense recording.

“NaCena is like the old RCA Studios in New York from the 1970s,” Figueroa recalls. “A big wooden room, the kind of place where creative things happen. We had Bernardo Aguiar, one of Rio’s hottest young sambistas—he made the pandeiro sound like a whole drum kit! And Glaucia brought in this amazing young bass player, Fernando Rosa.” Percussionist Chrys Galante added Brazilian touches to Figueroa’s bubbling conga patterns. Austrian guitarist Michi Ruzitschka brought lovely West African-inspired guitar to many of the tracks and proved fundamental to the arrangements and overall sound of the album.

“Sammy, Michi, and the band worked hard on the arrangements during the rehearsals,” adds Faro, an award-winning record producer of artists from Eddie Palmieri to Vocal Sampling and a singer-songwriter with a long history of folding unexpected global sounds into catchy songs. “By the time we went into the studio, it was just about playing, having fun. The musicians were very relaxed and there was a lot of interaction between Glaucia and the players. It’s really both a vocal and an instrumental album.”

The equal emphasis on voice and percussion is palpable from the first moments, as Figueroa’s stunning performance adds the perfect sway and drive to Nasser’s sweet, sultry singing. With Faro’s guidance maintaining the balance, Talisman shows off the unforced, natural beauty of Nasser’s voice – she co-wrote several of the songs on the album – mixing with the persuasive rhythms Figueroa brought to the sessions: bomba, plena, batá, samba and even Uruguayan candombe sliding elegantly under the melodies to power them.

From the catchy pop of “Quando Eu Canto” and the glistening delicacy of “E Quando Quero,” featuring Bianca Gismonti (daughter of the great Egberto Gismonti) playing piano on her composition, to the jazzy guitar-based ‘Encontro’ and “Boca de Siri’, both compositions by Chico Pinheiro, Talisman opens up new paths. Figueroa’s percussive intensity comes to the forefront on “Ilu-Ayê,” a sharp contrast to the languid “Abrigo”, where Nasser’s voice seems to come floating from a dream, or “Passos,” with Rosa’s fretless bass solo bringing a liquid punctuation to the tune.

The sole song in English, “Mandela,” is another of Talisman’s gentle highlights—and another happy accident. Nasser had the melody, but no words. Faro called her daughter, Anandi, a singer-songwriter, who wrote the lyrics. “When Glaucia read them, she said, ‘How did Anandi know that Mandela is my hero?’” Faro laughs. “It really was just perfect.”

As production continued, so did magical coincidence. In casual conversation with the engineers at NaCena, Figueroa discovered that one of his old friends, engineer Roy Cicalla of New York’s Record Plant, was living in São Paulo. Cicalla, who engineered John Lennon’s “Imagine,” Bruce Springsteen’s “Born To Run,” and Jimi Hendrix’s “Electric Ladyland,” had spent many a night with Figueroa in New York, talking into the wee hours after sessions with Aretha Franklin, 10,000 Maniacs and Patti Smith. The veteran engineer freaked out when he heard that Figueroa was in São Paulo.

The basic tracking had been done at NaCena but Cicalla insisted that the vocals be done at his A9 Studios. As Figueroa and Faro made their plans to return, the audio wizard was found to be extremely ill with cancer. Nonetheless, he monitored the project for as long as he could. Figueroa and Faro purchased their return tickets to Brazil late one evening in January. By the next morning, they received word that Cicalla was gone.

Recording Glaucia’s vocals at Roy’s studio with Roy’s protégé and disciple Eduardo Marson was sad but inspiring. As Glaucia’s beautiful voice came through the same old Neve board on which Cicalla had recorded ”Imagine,” “you could feel Roy’s spirit in the wires,” reflects Faro. The resulting sound captured the sought-after, iconic quality Cicalla was famous for.

These happy accidents, these nudges of fate, have been the hallmarks of Nasser’s career. Growing up in rural Minas Gerais in Brazil, at a young age she developed a pure singing style inspired by other mineiros such as Milton Nascimiento and Clara Nunes. “When I was 16, a talent scout wanted to take me to São Paulo for a recording contract, but my father told me I had to get serious.” And she did, earning a degree in international trade, while living in England and the US for two years. But the need to sing had never left her—she knew she had to try again.

Returning to Brazil, she devoted two years to training her voice and writing songs. A track from her first CD was picked up by the Putumayo label for its Acoustic Brazil compilation, showcasing Nasser alongside such stellar talents as Chico Buarque and Gal Costa. One thing led to another, and the song was included in the Hollywood film The Visitor. Then, a video of a song from her second album was shown in heavy rotation in every airport in Brazil. “Every time I thought my singing career was impossible, I would get a sign to carry on,” Nasser says.

Throughout her career she always had a feeling that Brazilian melodies and Latin rhythms could work together and that was why she approached Figueroa that fateful night in Miami. And Figueroa and Faro, always ready for another musical adventure, responded with equal inspiration and enthusiasm.

And now, with Talisman, the idea has become very real. Nasser, Figueroa, and Faro have created a strong musical partnership that spans Latin jazz and Brazilian song, supported by a lifetime of sonic wisdom. Talisman is indeed a charmed endeavour – a beautiful, luscious accident—that’s no accident at all.

Famed jazz percussionist Sammy Figueroa and Brazilian singer-songwriter Glaucia Nasser got together with producer Rachel Faro in Sao Paulo and created an album that presents a perfect balance of great musicianship and soaring vocals. Featuring guitarist Chico Pinheiro, pianist/composer Bianca Gismonti and pandeiro virtuoso Bernardo Aguiar this album is full of surprises. Sammy’s percussion flows beneath the songs, with bursts of Uruguayan candombe, Cuban batá, Puerto Rican bomba and of course carnival samba, enhanced by the multiple guitars of Chico Pinheiro and Michi Ruzitschka. Representing the rich Minas Gerais tradition of Clara Nunes and Milton Nascimento, Glaucia’s pure sound is aspirational and heartfelt, transcending language. And yet, African roots are always present, as in the classic Ilu-Ayê and the one English language song, dedicated to Nelson Mandela. ‘Like peanut butter and chocolate’, this combination of Latin jazz percussion and Brazilian song result in a delicious and unexpected treat.