For nearly two decades, Grammy nominated pianist Roberto Fonseca has been exploring and celebrating the music of his native Cuba. As a composer, producer, solo artist and collaborator with other Latin American music luminaries, he has served as a musical ambassador to his American neighbors to the north and to the rest of the world with his richly melodic compositions and recordings that capture the irrepressible Cuban sound and its rich musical history.

ABUC, his new album set for release on Impulse! Records on November 11, 2016, is just what the title suggests – a look backward at the evolution of Cuban jazz. Although nearly all 14 of the tracks on the album were written or co-written by Fonseca, the project as a whole overall feels like a retrospective of various musical styles and sources spanning several decades.

ABUC is the highly anticipated follow up to Yo, his 2012 recording that scored a Grammy nomination for Best Latin Jazz Album. Aided by more than thirty highly talented players, Fonseca infuses this new album with styles that are sometimes traditional, sometimes contemporary, but always distinctively Cuban.

“The idea was to show a different Cuba, perhaps from a different direction” says Fonseca. “That’s why the album title is Cuba spelled backward. I wanted to review the Cuban music history – not only the styles that have influenced me most, but in a broader sense, so people could have a better idea of how the orchestras used to sound in those times.”

This was “a risky task,” he admits, because an album like ABUC often requires the listener to take himself or herself to a time when audio recording technology was more primitive. “Capturing the music as it used to be done in the old days means getting out of the high quality sound of these days,” says Fonseca. “And if a certain song invoked a certain time when the sound was not that clean, that’s how we had to do it on ABUC. I’m sure many people will get confused and will think some tracks were composed some time ago. I hope they do, because that was our goal.”

The set opens with a fully orchestrated rendition of Ray Bryant’s “Cubano Chant,” a song that actually originated in the United States. The track captures the raw sound often found on records produced by the Havana-based EGREM label in the 1950s. “The importance of joining jazz with our Cuban music was, is and always will be significant to the history of music as a whole,” says Fonseca. “So I took it upon myself to travel to New Orleans and enlist the help of Trombone Shorty, whose ability to ‘sing’ with his instrument shows us how much Cuba and New Orleans are linked.”

“Afro Mambo” is just as raucous, thanks in part to the spirited vocal performances by Daymé Arocena and Carlos Calunga amid the orchestration. “The challenge was to make it sound like the orchestras from the 1940s and 1950s. We invited to EGREM one of the studio’s oldest technicians, who really taught us how they recorded back in the day. It was mind-blowing! Mikes here and there, all aerials, and the placement of the musicians was very important – a piano here, drums five pieces further away, bass facing backwards, wind ensemble to the side…It was really sonic time traveling!”

“Tumbao de la Unidad,” featuring Eliades Ochoa on guitar and vocal, is Fonseca’s call for unity among all cultures of the world. “I had Zé Nascimento, a Brazilian percussionist, along with other Cuban musicians. The rest of the musicians converged along different melodic, acoustic and electronic byways, and this guajira follows its journey beat by beat.”

“Contradanza del Espiritu” was the first song recorded for the album, so the track essentially marks the beginning of the journey that comprises this recording. “The wind instruments take inspiration from the sounds prevalent in the late 1960s,” says Fonseca. Although he admittedly hesitated to tamper with his piano’s pure sound, he eventually used delay, reverb and other enhancements to create a more progressive, assertive vibe. “The only fixed idea I had was that it should be an epic song like a silent movie image,” he says, “always conveying a feeling of strength and power.”

Driven by a distinctive conga beat, “Tierra Santa” tells the story of a musician from Santiago de Cuba who’s invited to play in New Orleans, where he discovers an amazing wind ensemble playing in the streets. “He’s awestruck, and he rapidly imagines home these melodies would sound with the Santiago conga rhythms,” Fonseca explains. “And while he exults in those thoughts, he decides to invite the musicians to travel to Santiago de Cuba to share with his hometown what he had marveled at so much, imagining all of them together, partaking of the strength of both cultures and their spiritual roots.”

Fonseca composed “Sagrado Corazon” with his mother in mind, which is partly why the track invokes a traditional sound. “There were two opportunities here,” he says. “One of them was for me to be able to play like a period pianist while being able to express my feelings without mimicking the greats, and on the other hand, to do the voices ourselves. So the choirs are not three sixty-year-old singers, but my drummer, my bassist and yours truly – and a little help from electronics, of course.”

“Family” emerges from Fonseca’s memories of listening to the radio at home with his mother when he was a boy in the 1970s. Among his favorites was a group called Los Zafiros, whose style embraced American doo wop, calypso, bolero, pop and more. The challenge came in finding the right vocalist for the track. “Since Los Zafiros are no longer with us, I had the huge honor of inviting Rafael Lay Bravo and Roberto Espinoza Rodríguez from Orquestra Aragón to participate in the creation of this atomic mixture I call electro-cha,” says Fonseca. “The song represents a fusion of several styles, like a big family. That’s the reason for the title.”

“Habanera” is what happens when Fonseca chooses to experiment with a classic Cuban sound. “I didn’t want to go classic since it’s one of the purest styles of all. So visualizing the purity of a classic voice – no lyrics – I meant to spotlight the beauty of our people. We are a hopeful people. We’re fighters, and above all dreamers. That’s how I define myself as a Cuban.”

“Soul Guardians” draws on a variety of influences, including rap, hip-hop and reggaeton. “We aimed to make something melodious,” says Fonseca. “Even though it might stand somewhat apart from this recording’s trajectory, it would reflect today’s zeitgeist. The theme confirms that our home country has loads of talent.”

“Asere Monina Bonco” features the brilliant flute work of the late Policarpo “Polo” Tamayo, who passed away in May 2016, shortly after the album was recorded. The track captures what Fonseca calls “the lip-smacking verve” of Cuban descargas music, “but from a very personal perspective, where tradition and modernity crunch together.” He adds: “Every time I hear this piece, I go back in time due to its aural evocation of tobacco and rum.”

“Después” is a bolero that features Manuel “Guajiro” Mirabal on trumpet and Mercedes Cortés Alfaro – Fonseca’s mother – on vocals. “There are no words to describe the experience of working with my mother,” says Fonseca. “Having her beside me signing something on my record, along with the titanic Guajiro Mirabal on trumpet, has been a blessing.”

“Velas y Flores,” which translates to “Candles and Flowers,” is Fonseca’s musical response to the questions asked by journalists about a recording project. Talking about music, he says, “is always somewhat difficult, since it implies translating my musical scores into words. But I simply meant this theme to express what I feel when I gaze inward. You might say it’s a sort of ‘played interview.’ The candles symbolize my hop of doing something to improve myself as a musician and the flowers stand for the beauty of music and of a whole country.”

ABUC ends with a scaled back version of “Cubano Chant” with Fonseca on solo piano – the ideal coda to this brilliant journey through the depth and breadth of Cuban music and its rich history. 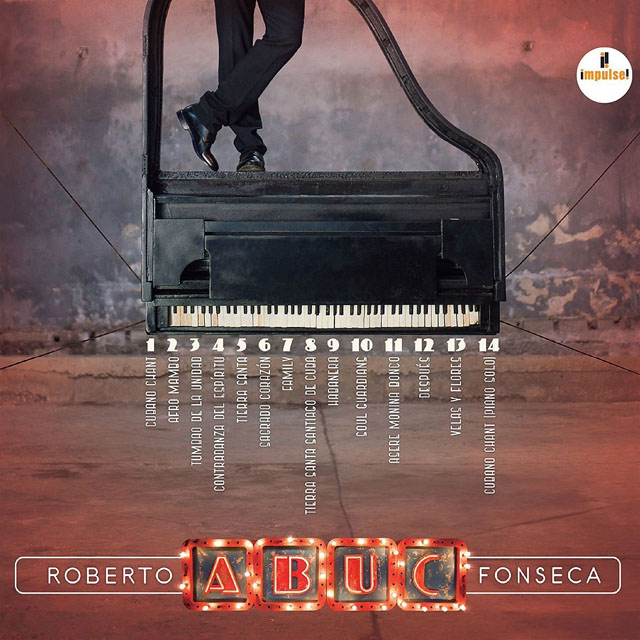