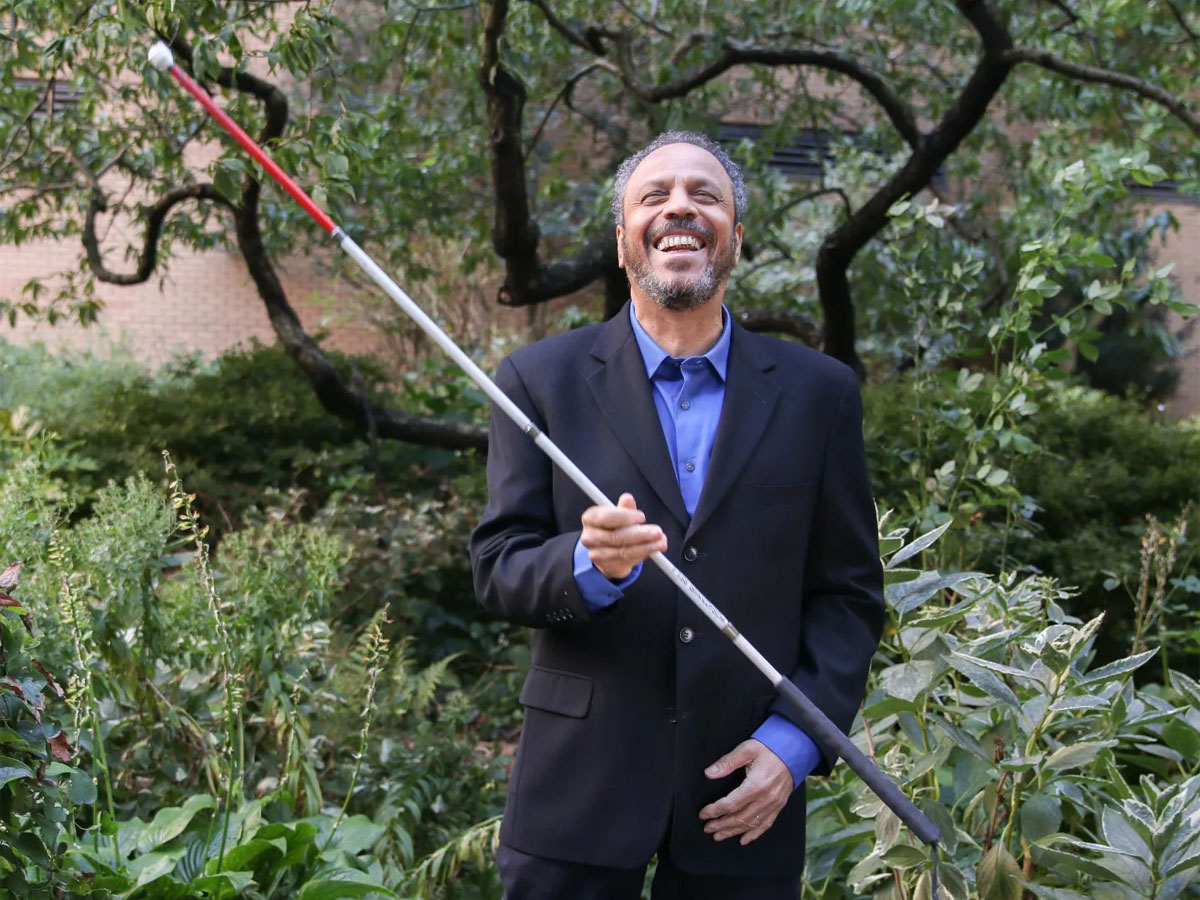 Drummer Vanderlei Pereira leads the dynamic Brazilian jazz sextet Blindfold Test, which boasts an unusual frontline of woodwinds and wordless vocal, backed by a burning rhythm section. Vision for Rhythm is set for release May 22, 2020 on Jazzheads. It features diverse styles of Brazilian music filtered through a jazz sensibility, and includes Vanderlei’s originals as well as compositions by some of Brazil’s greatest contemporary musicians. The musicians of Blindfold Test wear blindfolds during the performance of some of the band’s most challenging material in order to “level the playing field” for Vanderlei, who is blind.

Vanderlei Pereira (vahn-der-LAY peh-RAY-rah) is an extraordinary virtuosic Brazilian drummer, composer and arranger who has been based in New York City since 1988.  Combining a prodigious knowledge of Brazilian rhythms with dazzling technique and a distinctive touch, he has captivated audiences around the world with his unique and electrifying performances.

He was born into a musical family in Macaé, Brazil, a coastal city a little over 100 miles north of Rio de Janeiro, and began playing drums professionally at age 15. He moved to Rio in his twenties, where he pursued a multifaceted musical career that included a six-year performance internship with the renowned Orquesta Sinfónica Brasiliera (OSB).

As Vanderlei’s inherited retinitis pigmentosa progressed and his vision deteriorated, he realized he could no longer continue working in the classical realm and dedicated himself to music that did not require reading. He came to be known as one of the top jazz drummers in Rio, as well as being a highly regarded player of samba and Música Popular Brasileira (MPB), working steadily even after he lost his sight completely. After his move to New York, he quickly became an in-demand drummer on that city’s Brazilian music scene.

Vision for Rhythm is Vanderlei’s first CD as a leader. The album explores diverse traditional styles of Brazilian music filtered through a jazz sensibility, and features his Brazilian jazz sextet, Blindfold Test, with world-class performances by Susan Pereira singing wordless vocals and playing percussion, Deanna Witkowski on piano, Jorge Continentino and Rodrigo Ursaia on sax and flute, Paul Meyers on guitar and, on bass, Gustavo Amarante and Itaiguara Brandão.

From the explosive opening of the 7/4 samba “Misturada”, composed by one of his heroes, Airto Moreira, to Vanderlei’s blistering frevo “De Volta à Festa”, Vision for Rhythm is an exhilarating pan-rhythmic journey through Brazilian jazz, meticulously arranged and beautifully performed.  In addition to Airto’s tune, works by acclaimed composers Edu Lobo and Antonio Adolfo are featured, along with compositions by Toninho Ferragutti, Zeca Freitas, Nando Lauria, Kimson Plaut, and Jasnam Daya Singh.  Apart from his outstanding drumming and arranging, Vanderlei shows himself to be a formidable composer, as evidenced by his four works on this CD.

When asked about the challenges of being a blind musician, Vanderlei says:  “I try to keep a positive attitude.  I had to deal with losing my vision while continuing to work full-time as a musician.  It took over twenty years to truly accept my blindness and develop the ability to see the positive things in everyday life.  I try as much as I can to share some of that optimism with everyone I interact with daily.  I would hate to think that people feel sorry for me because of my visual impairment.  I’m blind, but so what? I’ve still got music and my own way of seeing things, thank God.  I try to channel that energy into my music, and I think it comes through on the CD.

“I feel blessed that I had the opportunity to create a band with such exceptional musicians, most of whom I have known for more than twenty years. This being New York City, we’ve played together in all kinds of situations and musical genres; when the time came to put the band together, I really knew everybody’s style and sound, and built Blindfold Test around them.  It was important to me to have a mix of Brazilians and Americans in the group, and the band could only have developed the way it did because of each musician’s deep involvement with both Brazilian music and jazz.”

Vanderlei challenges the musicians of Blindfold Test to wear blindfolds during the performance of some of the band’s most demanding material to “level the playing field”.  The result is an exciting adventure in sound, texture and musical energy.