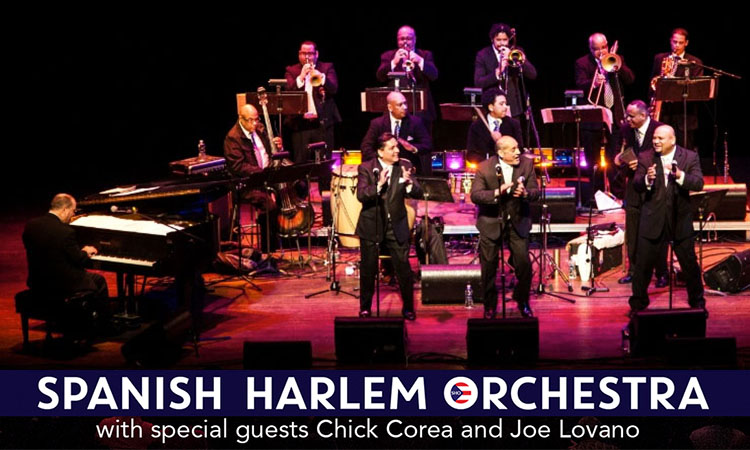 “…they’re the virtuosic journeymen who are one of New York’s great musical resources.” –New York Times

“They make you get up and dance, tap into the good-natured, communal spirit characteristic of salsa at its timeless best.” –Los Angeles Times

“…the Spanish Harlem Orchestra has evolved into the leading light of the salsa reconstruction movement…. ” –NY Newsdays 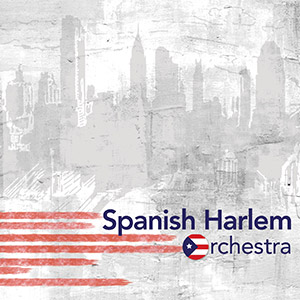 Harlem, NY — Tuesday, September 16, 2014 — There aren’t many pianists that can say they’ve been a Musical Director for Paul Simon and Rubén Blades, written and arranged the theme song for hit shows such as HBO’s “Sex and the City,” and have recorded and performed with the likes of Tito Puente and Celia Cruz. In fact, there’s only one: Oscar Hernández, a world-renowned pianist/arranger/producer and leader of the GRAMMY® Award-winning 13-piece all-star salsa band, Spanish Harlem Orchestra. Exclusively comprised of acclaimed instrumentalists known for supporting the “who’s who” of salsa, Spanish Harlem Orchestra is a musical tour-de-force keeping the hard-hitting tradition of salsa dura (heavy salsa) alive and well. Coming up on Tuesday, September 16, 2014, Spanish Harlem Orchestra independently releases their fifth eponymous studio album through a fan-funded campaign with ArtistShare®. Interviews and hi-res photos are available upon request.

Produced by Hernández himself, Spanish Harlem Orchestra features a stellar collection of nine newly written original arrangements and three cover compositions. Special guest pianist Chick Corea and saxophonist Joe Lovano close out the album with the orchestra’s singular Latin jazz reinterpretation of the Great American Songbook standard, “You And The Night And The Music.” Spanish Harlem Orchestra showcases the real sound of authentic, New York salsa at its best. Full force instrumental precision is beautifully met with inimitable vocal prowess by singers Ray De La Paz, Marco Bermudez and Carlos Cascante. All pieces are first or second takes recorded with no click track; it’s simply the genre’s foremost players churning out powerhouse salsa tracks. So, turn up the volume, open the windows, and put on your headphones or dancin’ shoes ’cause the Spanish Harlem Orchestra is back with a slew of mesmerizing new tunes!

For the recording of only the second English song since the orchestra’s debut album was released in 2002, Hernández enlists two of today’s biggest jazz stars, Chick Corea and Joe Lovano, to appear on Arthur Schwartz‘s “You And The Night And The Music.” Hernández notes, ” I always wanted to record a standard from the Great American Songbook. A tune that Tony Bennett and Frank Sinatra sang, and to put our unique Latin tinge on it. Corea is one of the most prolific jazz musicians of all-time, so when he immediately said yes to work with us, I knew the song would take a direction that’s never been done before.” A similar unprecedented collaboration took place for the first English track they recorded with Paul Simon, “Late In The Evening,” which was featured on United We Swing. At the time, Hernández was working with Simon as the Musical Director for his Broadway play “The Capeman.”

Spanish Harlem Orchestra pays homage to Manhattan’s Palladium Ballroom — the famous ’50s nightclub that’s been dubbed “the home of the mambo” — with a re-creation of Tito Rodriguez‘s “This is Mambo.” On the instrumental tip, Hernández also pens a standout track “La Princesa,” which is dedicated to his then 3 year-old daughter. On the track, swaying horns intermittently give way for trumpet, trombone, and conga solos while Hernández’s sublime piano work will get anyone up and dancing.

Over the past 12 years, Spanish Harlem Orchestra has solidified their place among Latin music’s foremost bands. Whether on record or performing live, they’ve successfully set the highest bar for salsa while securing its vitality for future generations. From his Bronx roots and admiration for nearby Spanish Harlem, Hernández’s celebrated career has seen him perform/record with all of the Latin greats and beyond. A keen sensibility keeping the all-out salsa aesthetic true to its form, and consistently fashioning fresh new arrangements affords the Spanish Harlem Orchestra as standard bearers of contemporary Latin music.

To celebrate the national release of Spanish Harlem Orchestra’s new album, Hernández and his top-notch crew are set to perform at SOB’s in New York City on September 29, 2014. For additional information on upcoming regional appearances across the country, please visit: www.spanishharlemorchestra.com.

ArtistShare®, which launched in 2003 as the Internet’s first crowdfunding platform, uses an innovative model that connects fans with artists in order to share the creative process and fund the creation of new artistic works. ArtistShare® projects have received numerous awards and accolades including 9 GRAMMY® Awards and 18 GRAMMY® nominations. For more information, please visit: artistshare.com.