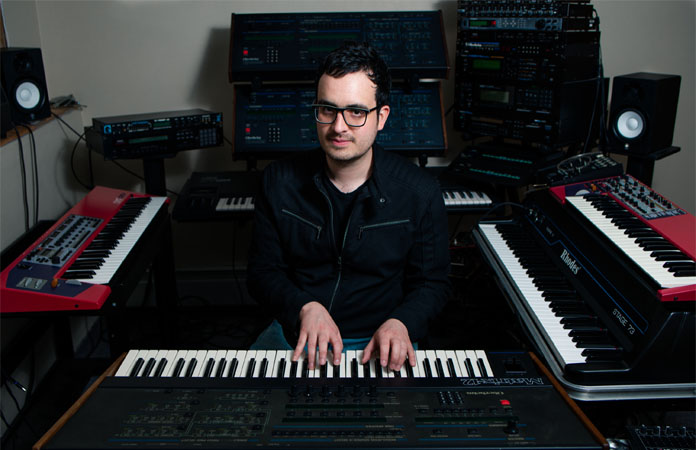 Consummate pianist Santiago Bosch is proud to present the November 14 release of his new album Galactic Warrior, his second album as a bandleader, following 2011’s Guaro Report.  The album is a canonical, through-composed celebration of the marriage of jazz and electronic instrumentation.  This album features ten of Bosch’s most hard-hitting modern jazz compositions that draw from the realms of rock, fusion, funk and electronic music.  These tracks, all masterfully conceived, produced and recorded by Santiago Bosch, present themselves like the soundtrack of a video game. Like a video game, the sonic intricacies of Bosch’s genre-bending compositions transport the listener to other planes.  Galactic Warrior features Santiago Bosch on fender rhodes, synthesizers and acoustic piano, Tucker Antell on tenor sax, Dany Anka on electric bass, Juan Ale Saenz on drums, Darren Barretton trumpet, Tim Miller on electric guitar, George Garzone on tenor sax, Vasilis Kostas on laouto, and Jared Henderson on the upright bass.

Born and raised in Barquisimeto, Venezuela. Bosch was introduced to the jazz art-form by his father, saxophonist Jaime Bosch.  Each melody line and solo break of Galactic Warrior tells the tale of Bosch’s musical upbringing; beginning his foray into performance at the age of 9, Bosch receiving formal education in classical music/piano training, but after two years, the weight and influence that jazz, fusion and improvised music had on him pushed Bosch to quit the classical school to dedicate his time entirely to self-driven practice. Bosch would listen to the records of his favorite musicians over and over again, transcribing them by ear.  Bosch went on to compose, tour and record with artists across Venezuela at the age of 15 and graduate suma cum laude with a graduate performance degree from the prestigious Berklee College of Music in 2017. In the interim, Bosch has made his mark on the international jazz scene with performances at renowned venues such as the 55 bar, Kennedy Center, Lincoln Center: Dizzy’s Club Coca Cola, and Heineken Jazz Festival.  Galactic Warrior, the pianist’s first release in eight years, will solidify Bosch’s place in the forefront of the international jazz scene.

Galactic Warrior begins with an incendiary track entitled “Perspectives”. This composition features stunning interplay between Bosch and saxophonist Tucker Antell, post-bop vocabulary dripping from both instruments flawlessly and passionately, engaging each other in the wordless conversation inherent to the jazz art-form.  This sinister, foreboding track sets the stage for an album of ‘take-no-prisoners’ modern jazz conceptions that represents the very best of modern-day jazz fusion.

The second track, “Living in the Past”, is a celebration of the fusion greats of yesteryear, Tim Miller’s refined arpeggiations cascade over Bosch’s harmonic jabs, a celebration of the sound of the great Allan Holdsworth. Bosch’s melodic prowess and ability to conjure a spectrum of colors from a fender rhodes harkens back to Chick Corea’s electric exploits of the 70’s and 90’s. The album’s title track seems to capture the energy and intensity of the whole project.  A masterful composition, “Galactic Warrior” tests the limits of rhythm and harmony, gracefully playing with sequencing and metric modulation all while maintaining a complex 5/4 piano ostinato.

“Main Menu” offers a laid back groove performed by the duo of Bosch on the fender rhodes, synths and Saenz on drums.  The use of effects (multidelay and pitch shifter processing) fills out the track and allows for a rich polyphonic experience. Bosch’s other-worldly melodic invention drives the track and ultimately allows it to dissipate into dissonance. On “Transition”, trumpeter Darren Barrett displays his stunning facility on the horn alongside the moody soundfield created by Bosch’s synthesizer.  The track features breathtaking solos by both musicians, modern jazz phraseology dripping from the fingers of these esteemed musicians.  The album’s final track “Why” reflects quite a different side of the ensemble, with Jared Henderson on acoustic bass and Bosch on an acoustic piano, this track harkens back to Hancock’s ‘Maiden Voyage’ in its melodic motifs and yet differs in feel, bringing a quiet intensity to the timeless classic. Garzone demonstrates his stunning facility on the saxophone with a stellar solo on Bosch’s reharmonized changes.

In 2010, he traveled to the U.S. as a cultural ambassador sponsored by the State Department of the United States (representing Venezuela) in a cultural exchange program on the Roots of American music. He took part in various musical and educational activities with musicians from all over the world, doing performances and receiving master classes in Chicago, Nashville and Washington D.C, giving a final concert at the prestigious Millennium Stage, Kennedy Center, Washington D.C.

Bosch performs regularly at the 55 Bar with Tim Miller, a residency that has allowed the pianist to play with such luminaries as Nate Wood, Clif Almond, Ari Hoenig, Evan Marien, Sam Minaie, and Orlando LeFleming among others.