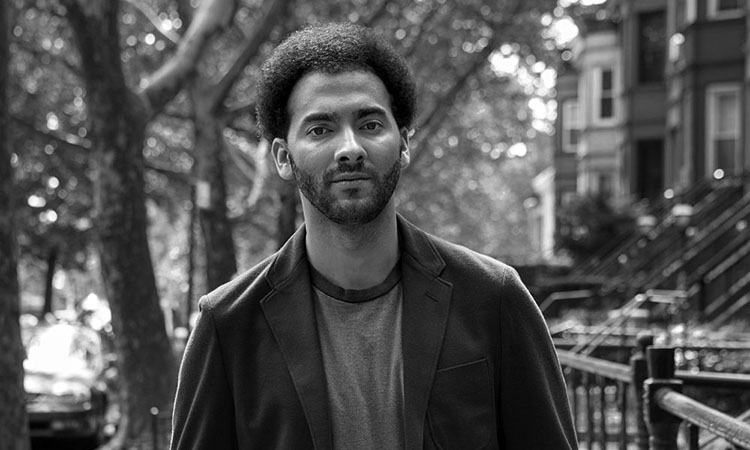 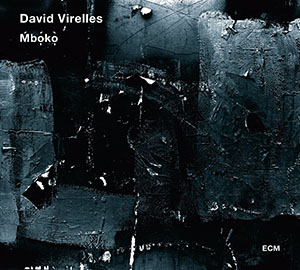 With Mbókò, pianist-composer David Virelles – based now in Brooklyn but born and bred in Cuba – has taken the folkloric rhythms of Afro-Cuban religious ritual and transmuted them into a 21st-century music resonant with mystery and meaning. The main title, Mbókò, can be taken to mean “fundament” or “sugar cane” or “The Voice.” That’s not the human voice, but The Voice that is believed in Abakuá culture to be the Divine Voice. Sound is an element revered in this culture, and that idea – the worship of sound itself – was the central idea in the performances of Virelles’ compositions on Mbókò. The album’s subtitle – Sacred Music for Piano, Two Basses, Drum Set and Biankoméko Abakuá – indicates both the ritualistic intent of the 10 pieces and their sound, with the piano featured alongside dual bass drone (played by Thomas Morgan and Robert Hurst) and the polyrhythmic percussion of a traditional trap set (Marcus Gilmore) and the all-important four-drum biankoméko kit (Román Díaz). Virelles has tapped into a musical impulse that is simultaneously ancient and modern, communal and personal, meditative and propulsive. Mbókò casts a spell.

The Abakuá is a magic-religious male initiation society in Cuba, based on a West African ethno-linguistic identity and its emblematic masked dance performance. Speaking about his connection to Afro-Cuban ritual, Virelles explains: “I’m not necessarily a participant of these religions. However, digging into elements of their symbolic music and retranslating them into music for here and now helps me find out more about where I come from – and where I’m going.”

Virelles, who is 30 years old, was born and raised in Santiago de Cuba, moving to Canada in 2001 and to New York City in 2009. His studies included private lessons in composition with the great jazz composer-saxophonist-flutist Henry Threadgill. Virelles appeared as a sideman on two previous ECM albums: Tomasz Stanko’s double-disc Wislawa and Chris Potter’s The Sirens, both released last year. The pianist’s album Continuum (Pi Recordings), was his initial exploration in the modernist refraction of Afro-Cuban ritual sounds; exotic and evocative, it wound up on many critical best-of-the-year lists in 2012.

Reviewing Virelles’ headlining run at the Village Vanguard last year, Ben Ratliff of The New York Times described the pianist’s “percussive playing, delicate harmonies and clusters played carefully with a flat hand or a forearm.” The review continued: “He’s never haphazard: He’s got a sure touch and multiple musical vocabularies, of which he seems determined to create a synthesis that isn’t schematic or obvious. That he’s choosing to perplex a little, rather than dazzle you, might be one of the best reasons to see him.”

Virelles and company convened in New York City’s Avatar studios with producer Manfred Eicher to capture the sounds of Mbókò. The pianist singles out the contribution of Román Díaz to the soul of the music. “This kind of album would not have been possible without Román’s contribution – because of what he represents, not only as a musician but also as a carrier of culture, being a title-holder in this tradition,” Virelles explains. “We have developed a kind of playing together that shaped the record’s overall sound. All these traditions have specific drum syntax. Román happens to be a specialist of the largest drum in the biankoméko – the improvising drum bonkó enchemiyá – and its language. The album is made up of piano pieces that allowed for either a parallel or entwined development along with the bonkó enchemiyá. As I explained the idea to Román, he knew exactly what I was referring to because drums have a communicative quality in folklore that is extremely structured. For Mbókò, rather than the human voice – which is another element that Román and I have explored previously – it’s the bonkó enchemiyá drum that tells a story with a language that can be traced back in history.”

What makes the music of Mbókò “sacred” is the context of what is being explored, the history and tradition of the material. “This record is about the Carabalí culture existing in Cuba, specifically the Abakuá Secret Society,” Virelles says. “I’ve learned through research that this religion and culture in general has had a major impact on Cuban identity, which is something that I’m also exploring on this album. All the compositions I wrote for this record are directly related to and inspired by Abakuá. When Román plays a musical instrument, and because he comes from this kind of training and school, he plays sacred music. In Cuba, we also have had a tradition of sacred music composers in so-called classical music. I feel a connection to that as well, and I tried to look at the relationship between these two completely different modes of expression.”

As for the role of the two double-basses on the album, Virelles points out that they are not always there for melodic definition: “The basses become more of a hybrid instrument that sounds like a musical drone, or like certain string instruments from Africa, the Caribbean and Latin America.” And about the album’s other drummer, he says: “Marcus is a magician of rhythm and orchestration – I knew that he would find the exact thing to play.”

Reflecting on this music’s relation to jazz, Virelles says: “I don’t think in terms of jazz or any other musical definition. To me, so-called jazz is not separate from any of the Cuban traditions or anything else I’m interested in. It’s all part of one kind of expression – this large variety of cultures that came together in the New World. For me, Bud Powell, Charlie Parker, Thelonious Monk, John Coltrane and Andrew Hill have as much in common with any Cuban folkloric music or anything I’ve heard coming out of Brazil or Haiti, because even though things developed differently in these places, I believe it to be essentially music that comes from the people with a social function. I am a part of this fabric, too.”